A COUPLE OF VISITS TO MARSH LANE.

Having stayed in Sunday and Monday I was keen to go out on Tuesday so when the rain stopped I headed off to Marsh Lane.It was pretty gloomy and breezy when I got there and I had the place to myself.

Didn't have much success with the camera on my walk round.A couple of Green Sandpipers and what I think was an Osprey were a long way off especially the Osprey.The only fun I had with camera was with a young Sand Martin waiting patiently on the barbed wire fence by the CP hide for mom to bring lunch and I had a go at some feeding shots. 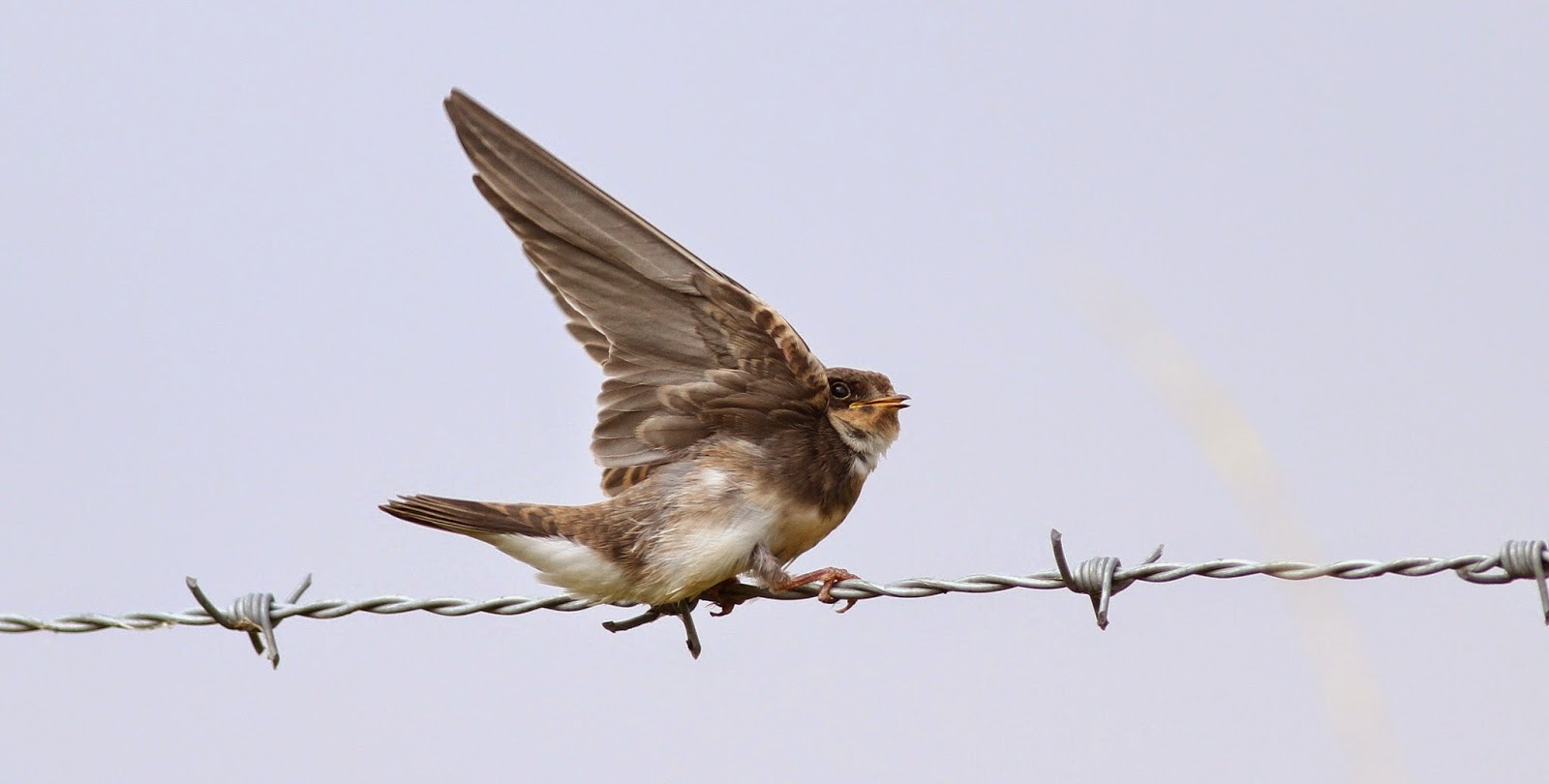 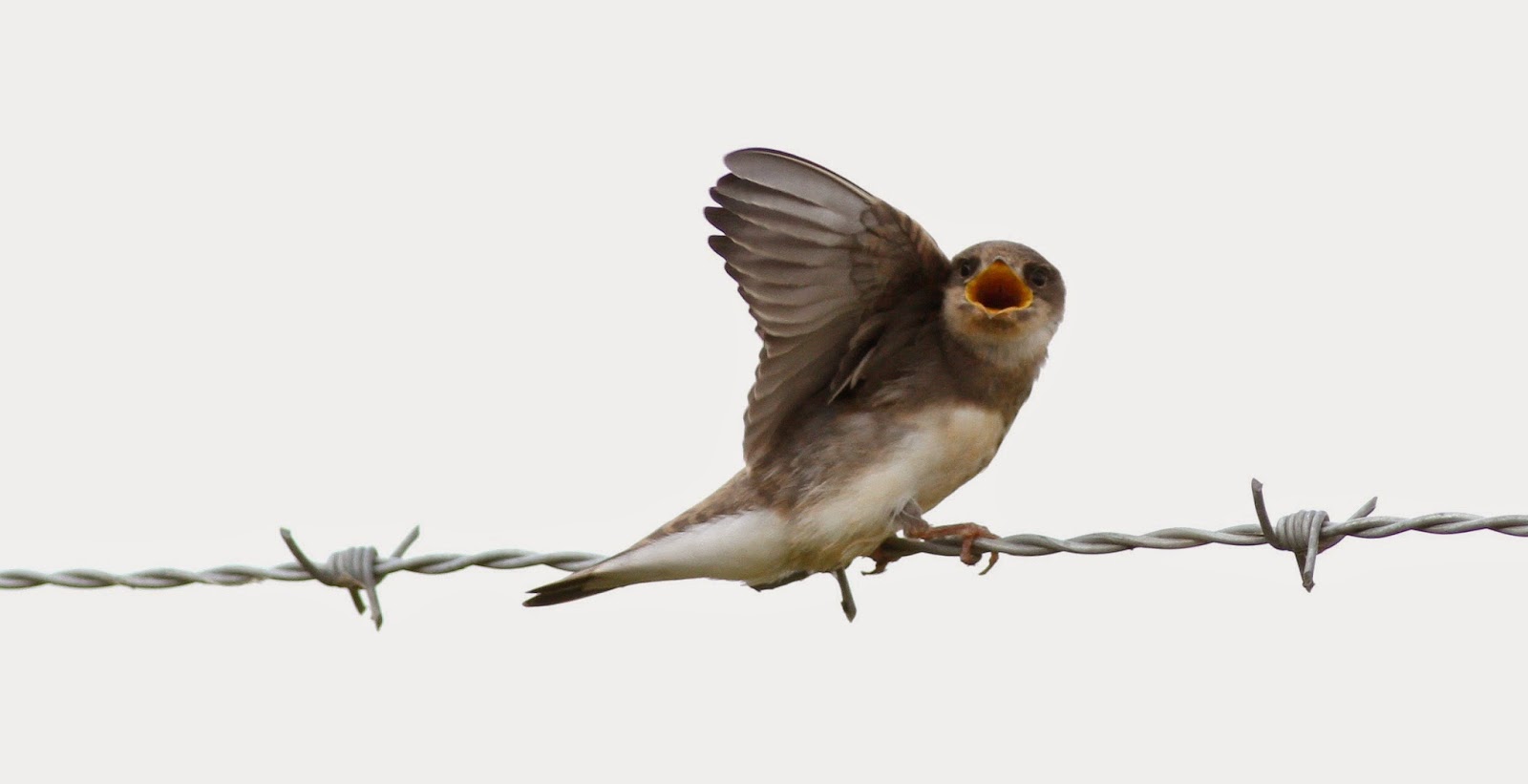 On Wednesday which was a much nicer day I went along again to Marsh Lane but pretty early in the morning this time.I was rewarded when I spotted a Ruff on the CP pool.

From the Oak hide a Common Sandpiper showed pretty well.

To show I can get shots of other things besides birds I got this male Migrant Hawker on the causeway. 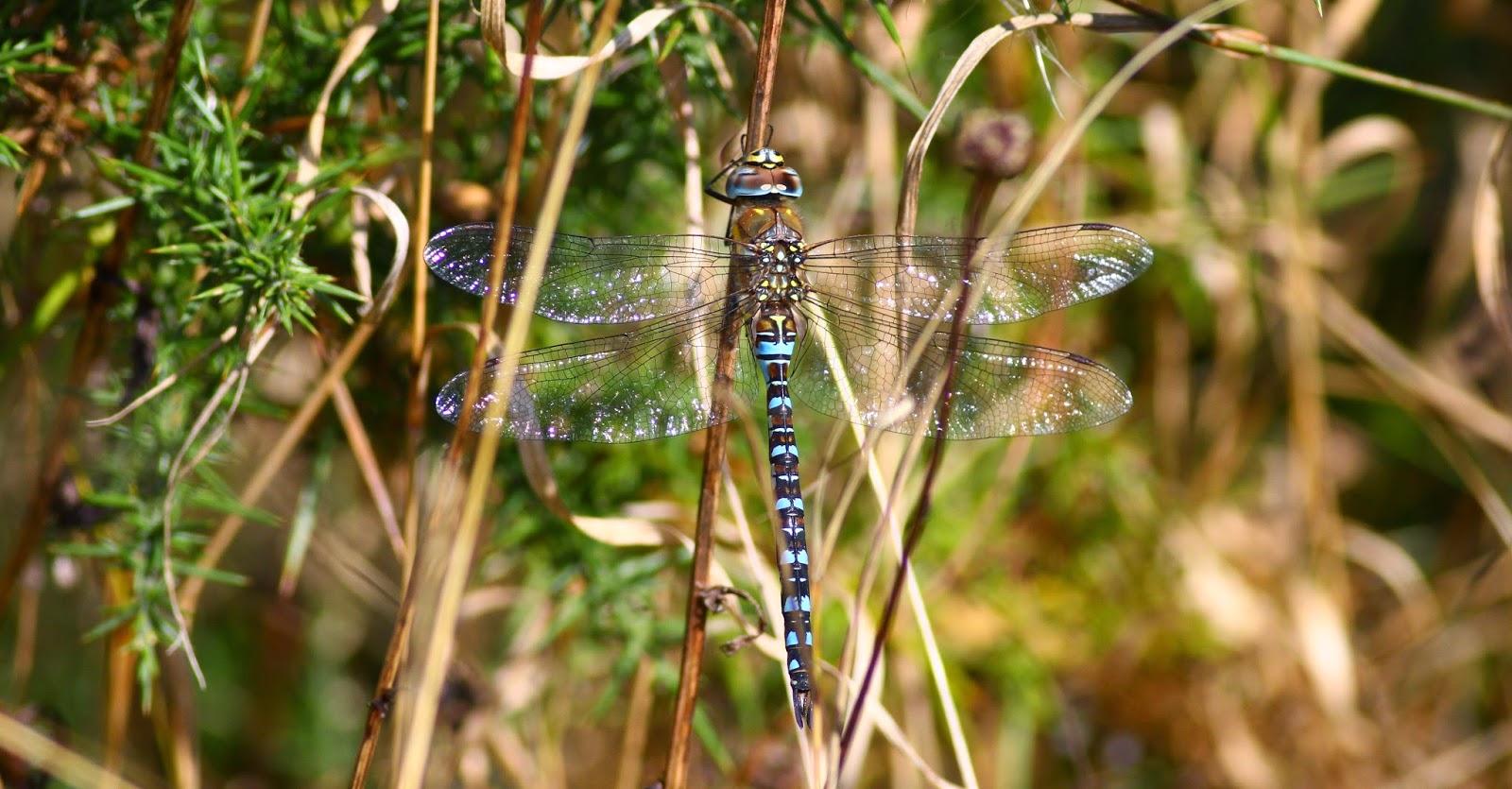 After lunch back home when I saw that the weather was still decent I drive the short distance to see if Red (the Netherwood Redstart) was still about.He was.He has been around for well over a month now and including this visit I've been over to see him 15 times.I've  been lucky enough to see him every time.

This time he gave me my best ever views/shots leading me to think he may be off soon.I shall miss him. 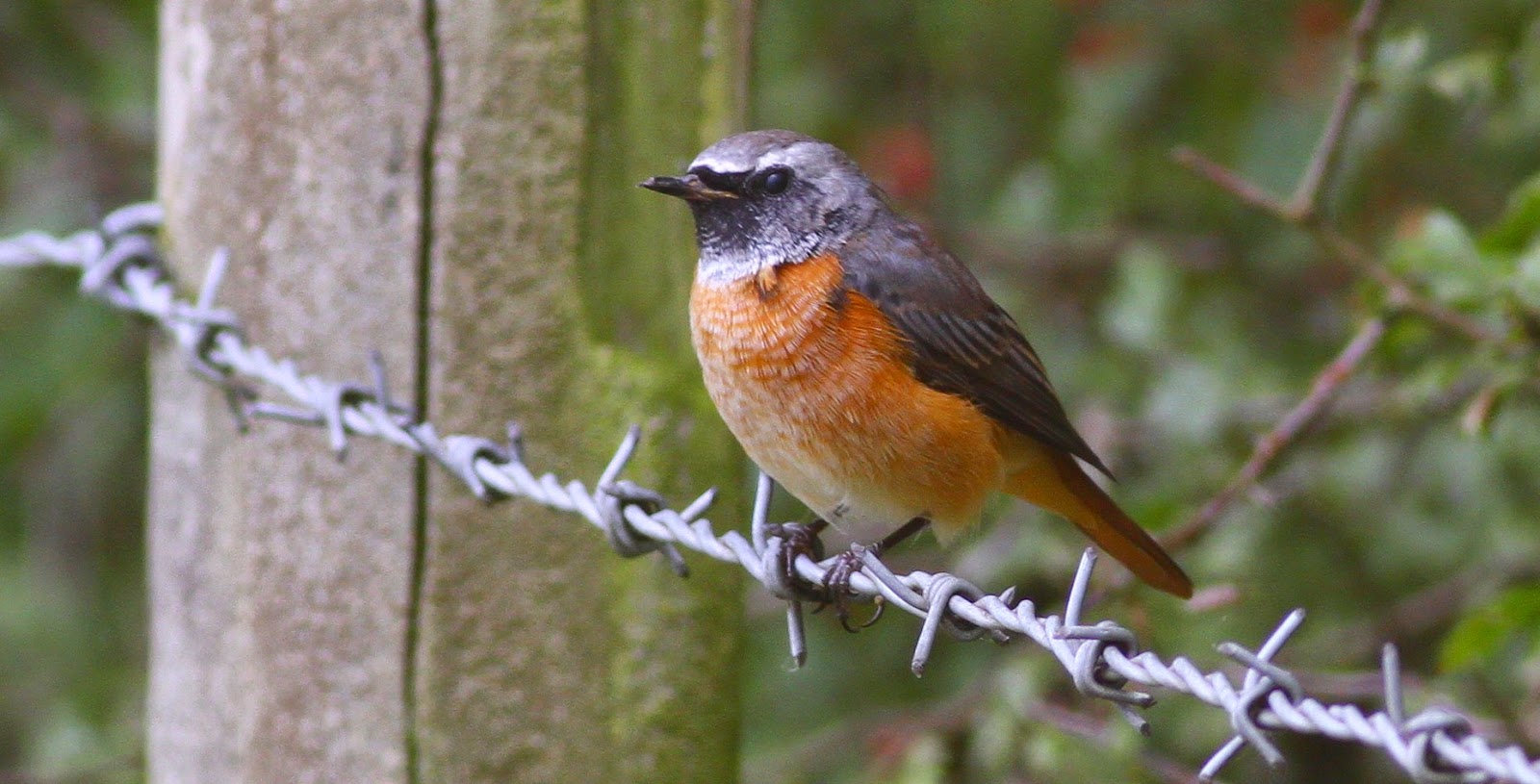 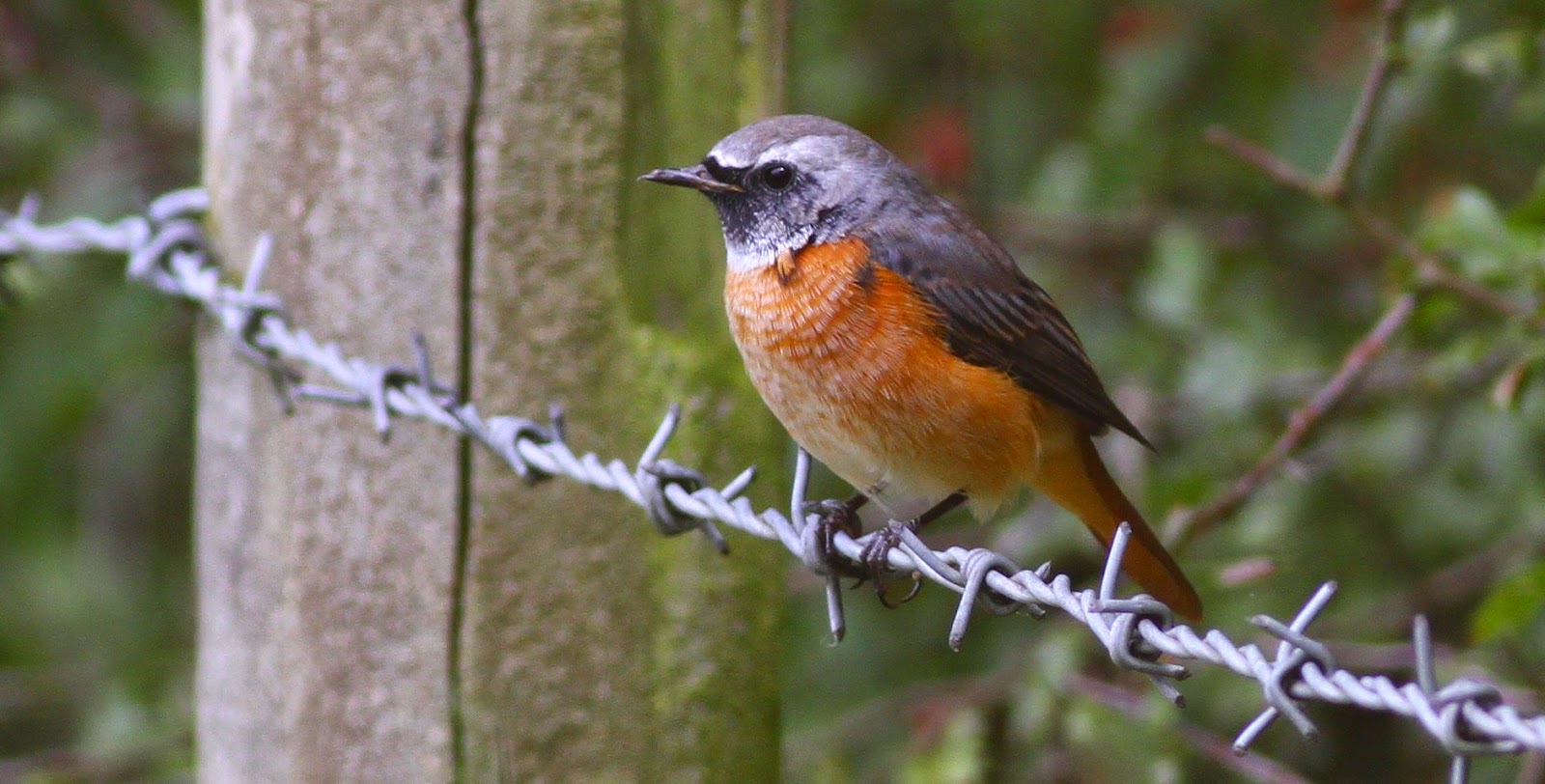 Whilst watching Red I spotted this chap but I'm not sure what it is.Must check the books.(Late addition : Hoping it was a Hawfinch but no chance.Have been told it's a Young Bullfinch).

Also miles away on some wires were these chaps (12 in total) which I think are Fieldfares.If so they're pretty early.(Late addition : now know they are Mistle Thrushes)

Posted by Max Silverman at 07:37 2 comments: Links to this post

AN EARLY VISIT TO MARSH LANE.

Last Saturday I went over to Marsh Lane very early.Well very early for me.I was in position just a little way down the path to the CP hide by 7.30 AM ready to have another go at getting some decent shots of Hirundines.

It was a cracking morning with the sun shining and very few clouds about.The trouble was  there were no Hirundines to be seen  so I thought I'd have a look in the CP hide.Scanning the islands looking for something decent I was put off by the fact that there were loads of Greylag Geese everywhere leaving little room for anything else so I quickly gave up.This turned out to be another in a long list of birding errors I've made over the years.

Back out on the path outside the hide I was pretty pleased when quite soon I managed a shot of a juvenile  Peregrine that flew across the CP pool unfortunately in the distance and away from me.It was then that Paul Johnson (who had been there since dawn) appeared and told me that the Peregrine had been on one of the islands on the CP pool eating a kill at the same time I was in the hide.Oh Dear ! ! Never spotted it.Not got a shot of one on the ground feeding.Damnation ! !

By this time a few Hirundines had turned up and I spent the next 90 minutes trying to get some decent flight shots.Didn't do too bad.

Didn't do as well as last time getting in flight feeding shots only getting this lone shot and that at distance.Great to watch though.

Concentrating on trying to get the flight shots I didn't notice that some Sand Martins had landed on the barbed wire fencing only 6m away.Changing the settings on the camera as quickly as possible I managed to rattle off some shots but I needn't have panicked because they hung around for quite a while and didn't seem at all phased by an ancient photographer being so close.What cracking birds they are. 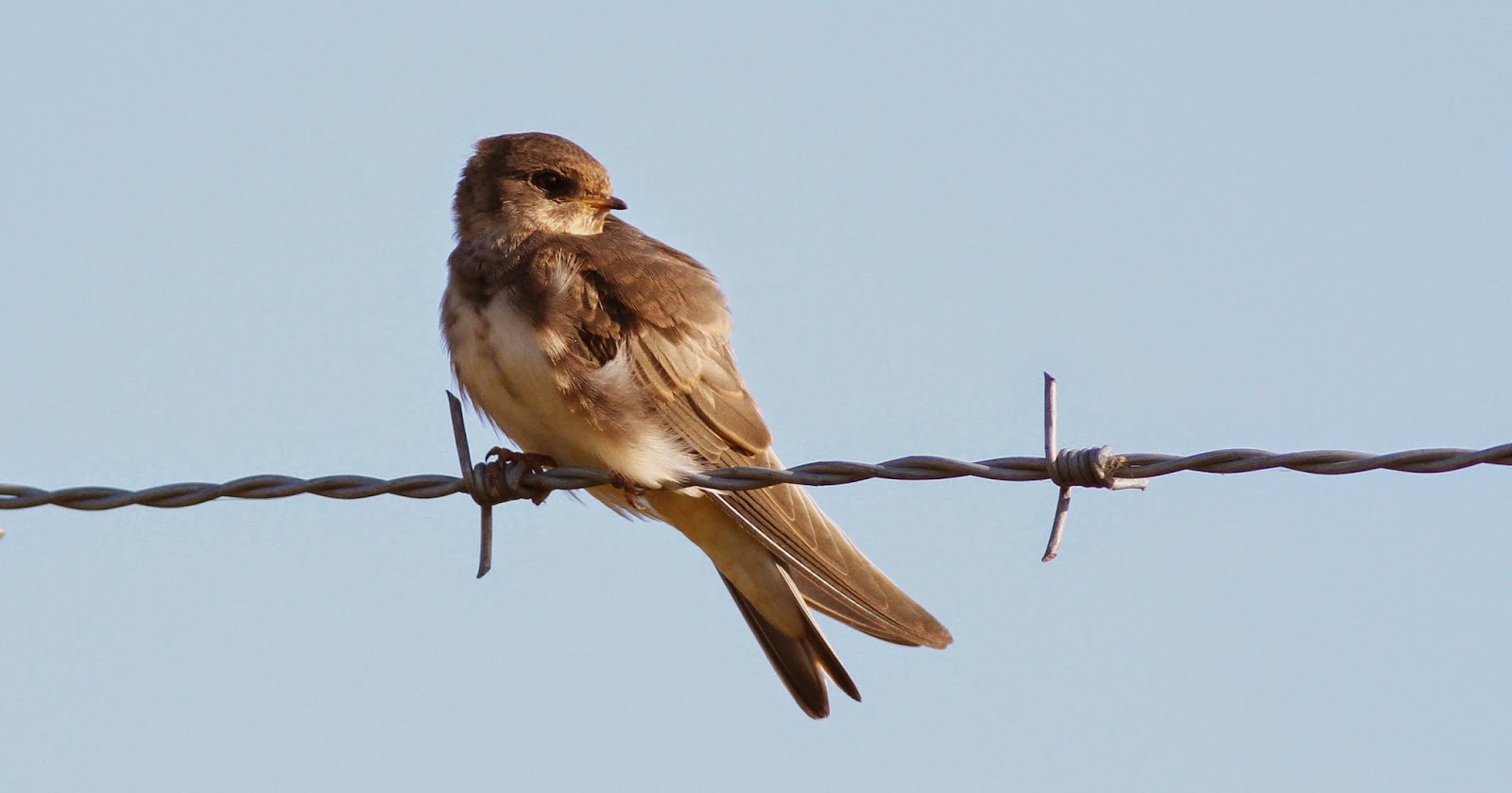 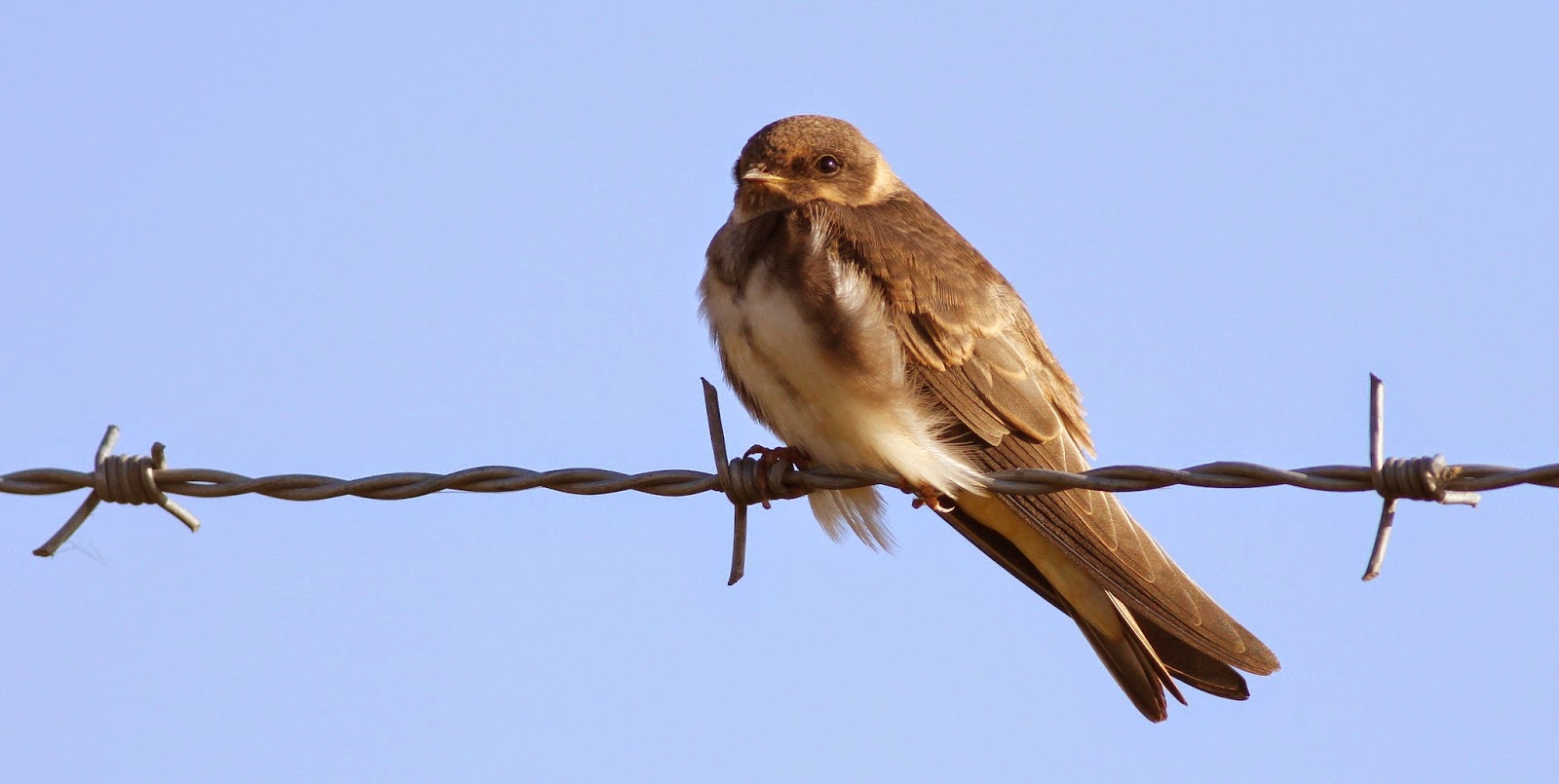 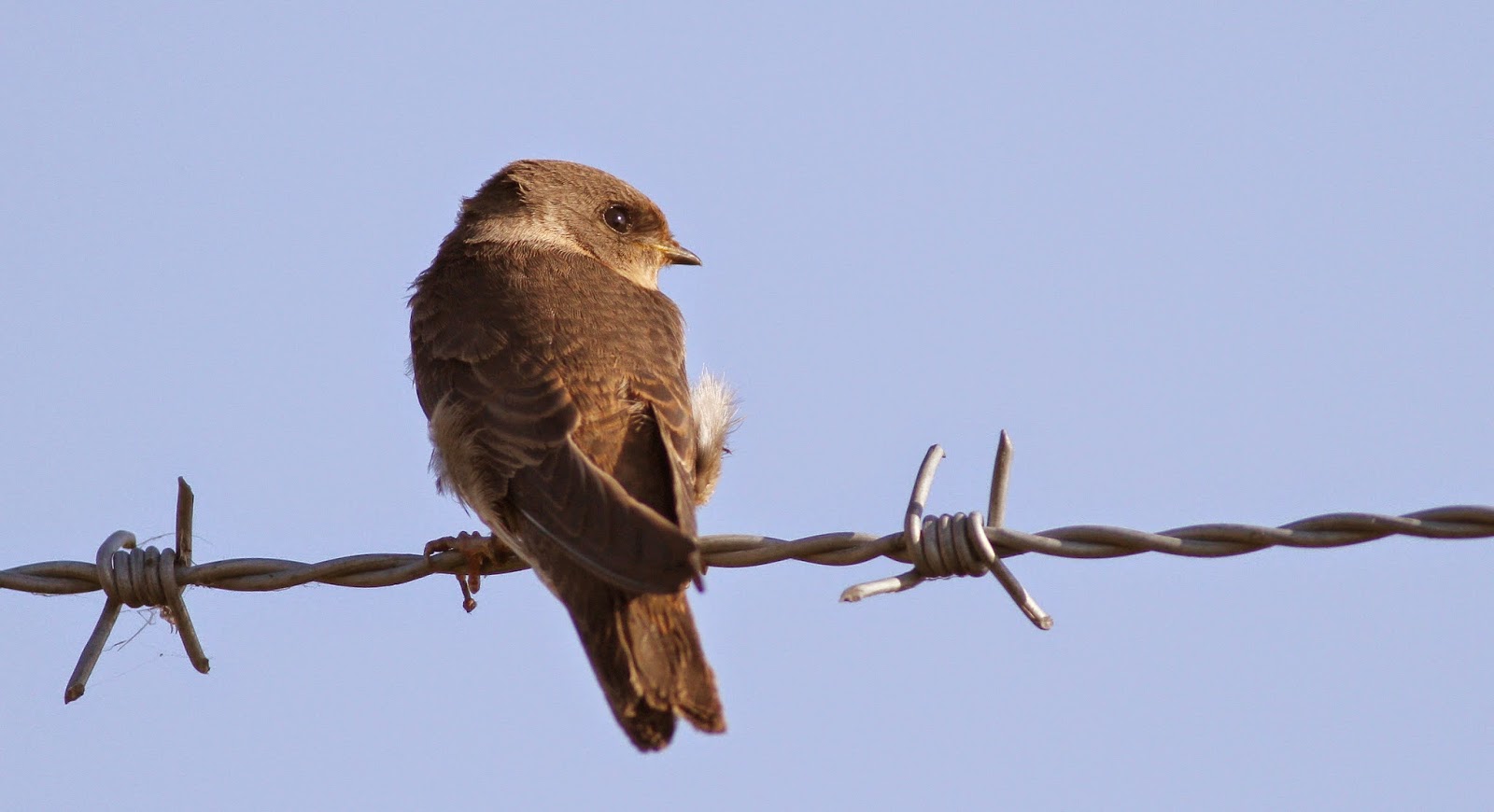 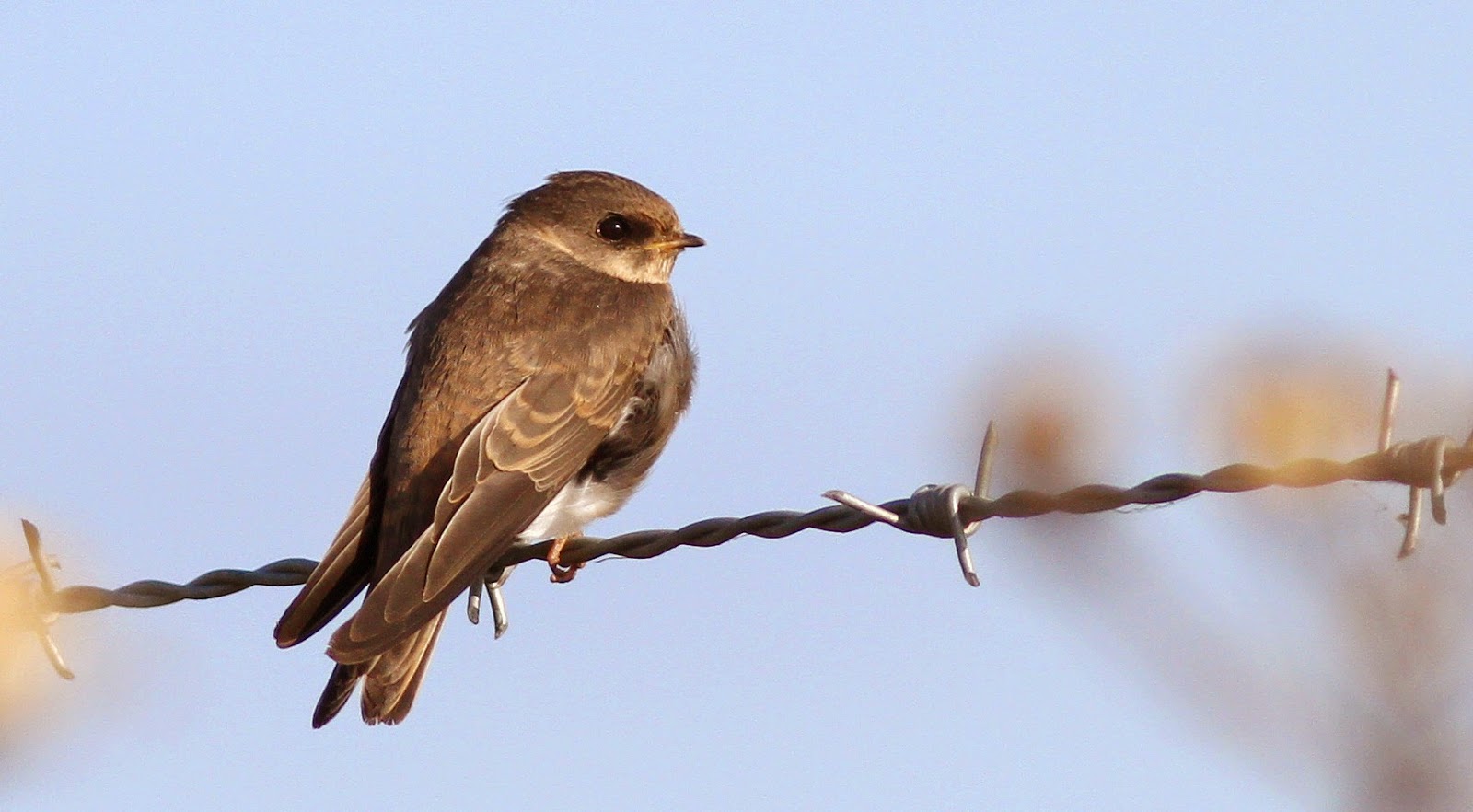 Posted by Max Silverman at 01:32 No comments: Links to this post

Earlish on Friday morning I went over to Marsh Lane with one aim and that was to try and get some flight shots of Hirundines and in particular my favourite Sand Martins.

To have a chance of getting a half decent shot you need the sun out and behind you otherwise you are wasting your time as I found out the day before when I amassed a large collection of crappographs.

The sun was out (well it was to start with) and behind me as I stood in the car park not long after 8.00 AM.Managed some pretty decent ones as they whizzed round.

I was very lucky as a few very briefly landed on the barbed wire fence near the hide.Couldn't get close though but one of them was a Sand Martin.Lovely birds. 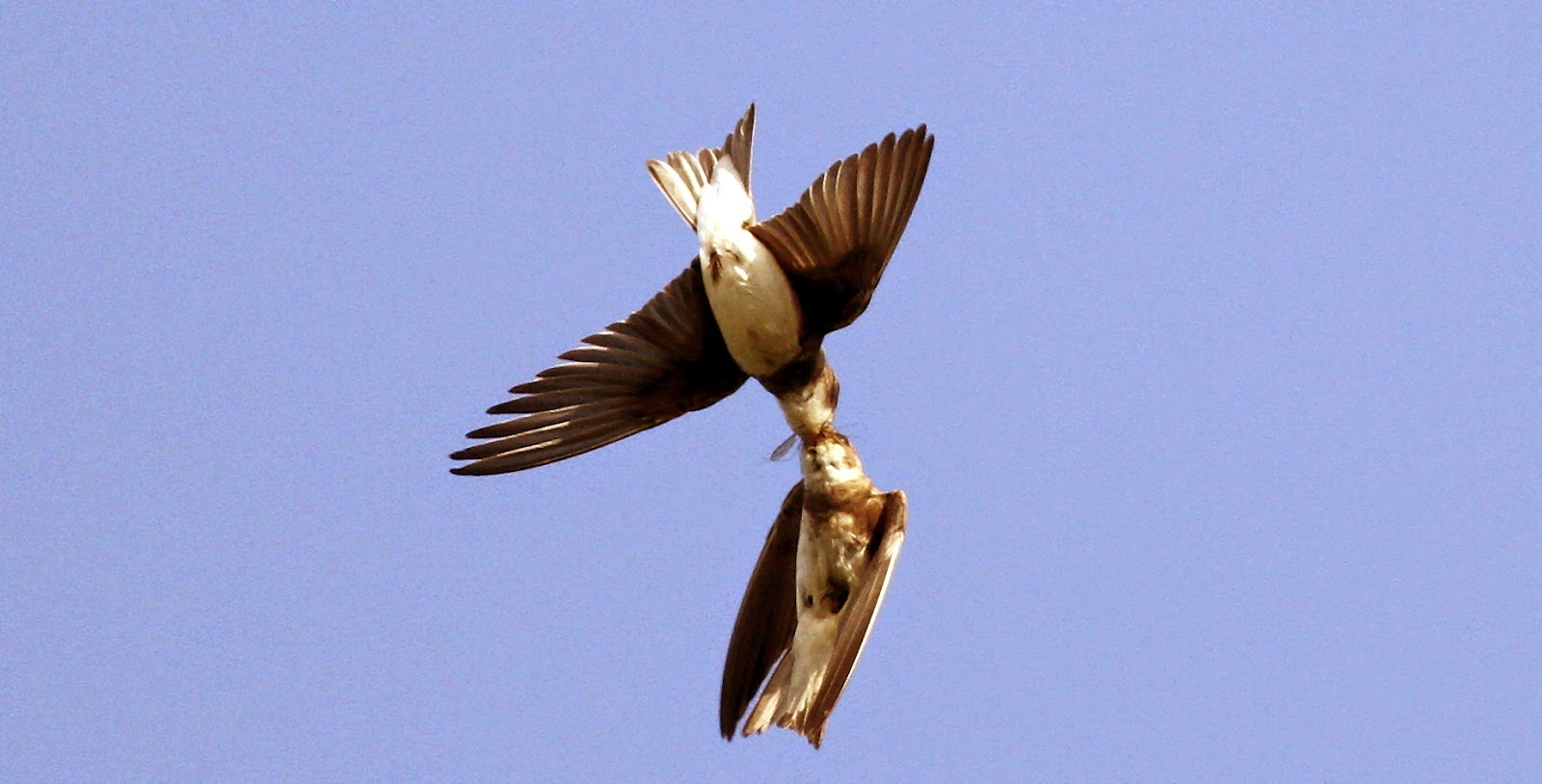 It quite soon got gloomy and as I was about to pack in and head for home a Hobby flew by  and I managed a couple of so so shots but nice to see as they've been thin on the ground for me this year.

Posted by Max Silverman at 08:08 No comments: Links to this post

A VISIT TO MARSH LANE.

On Tuesday morning I went over to Marsh Lane.Yet again the weather man had got it wrong and instead of being bright it was gloomy and a strong wind was blowing.Worst of all was that it was bitterly cold.

Had a good look round but struggled to find anything of note.Did get a couple of shots of what I think is a young Linnet on the causeway. 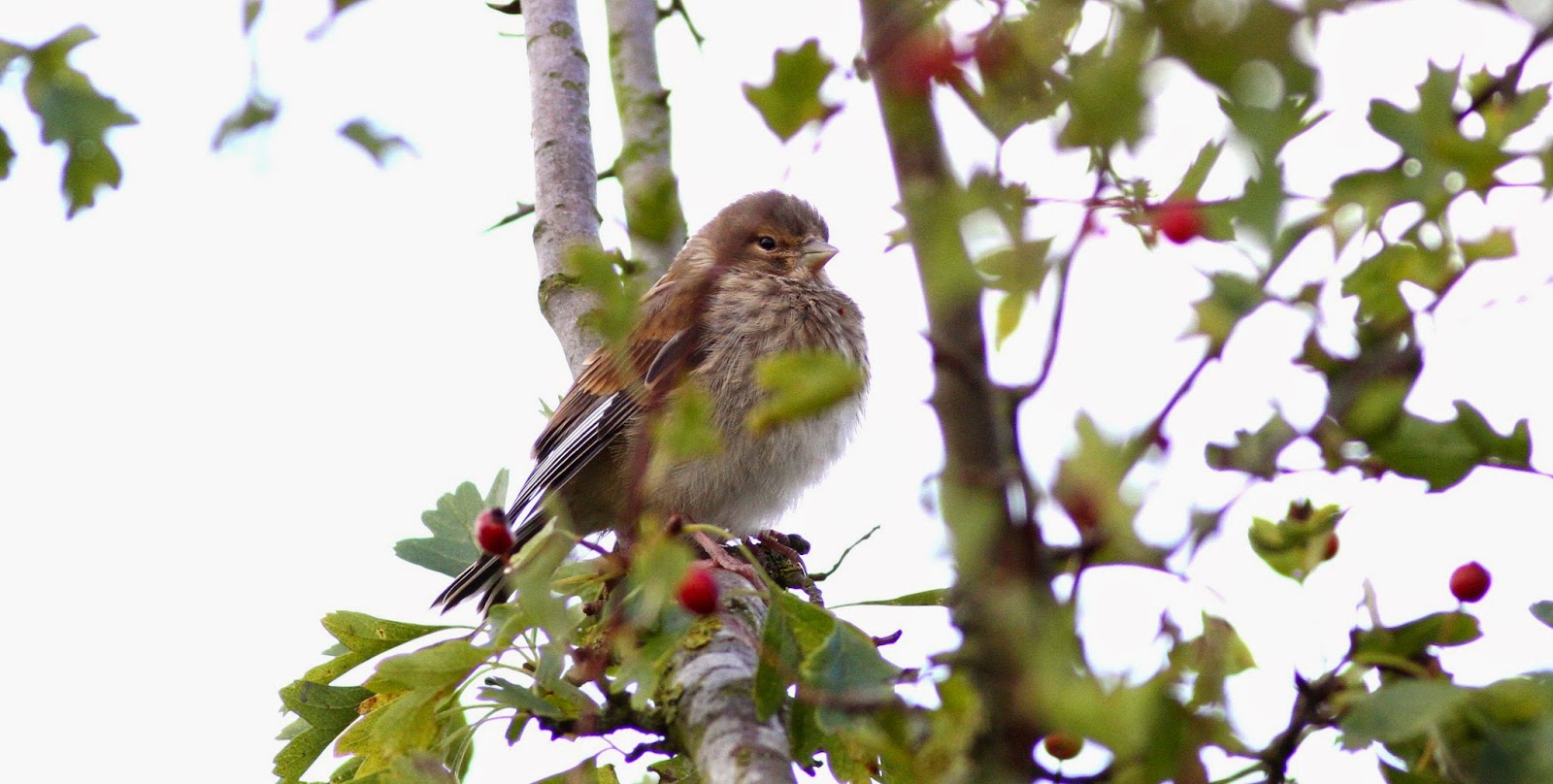 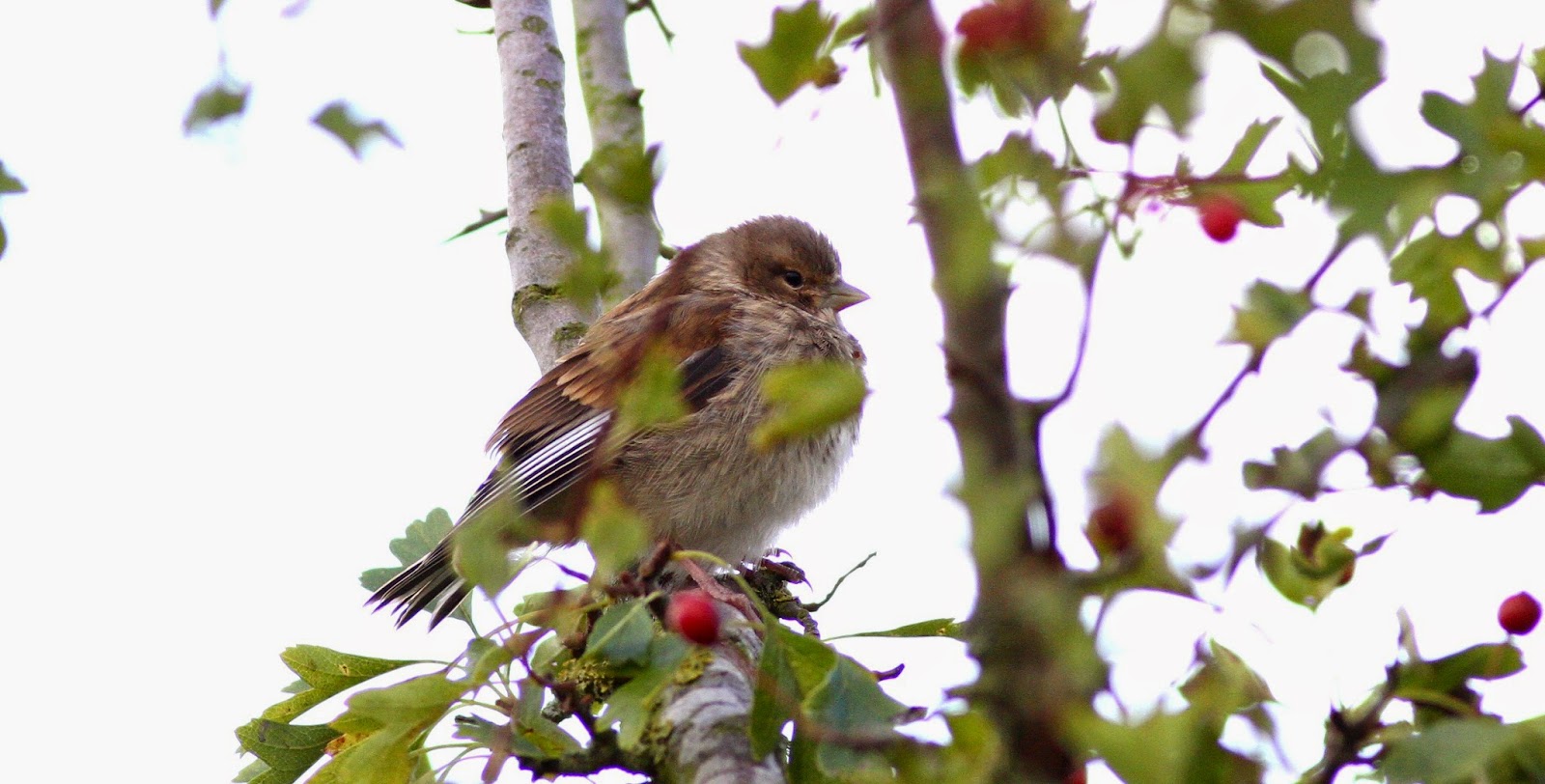 There were quite a lot of Hirundines whizzing round the CP pool and I couldn't resist at having a go at some flight shots.What a game that is.Almost impossible.These are the best (or should that be the least bad) of what I managed.

On Monday afternoon I'd gone over to see if Red was still there because he must soon fly off to Africa.Luckily he was still there and he must be getting used to me now because he let me get some decent shots.I'll miss him when he goes. 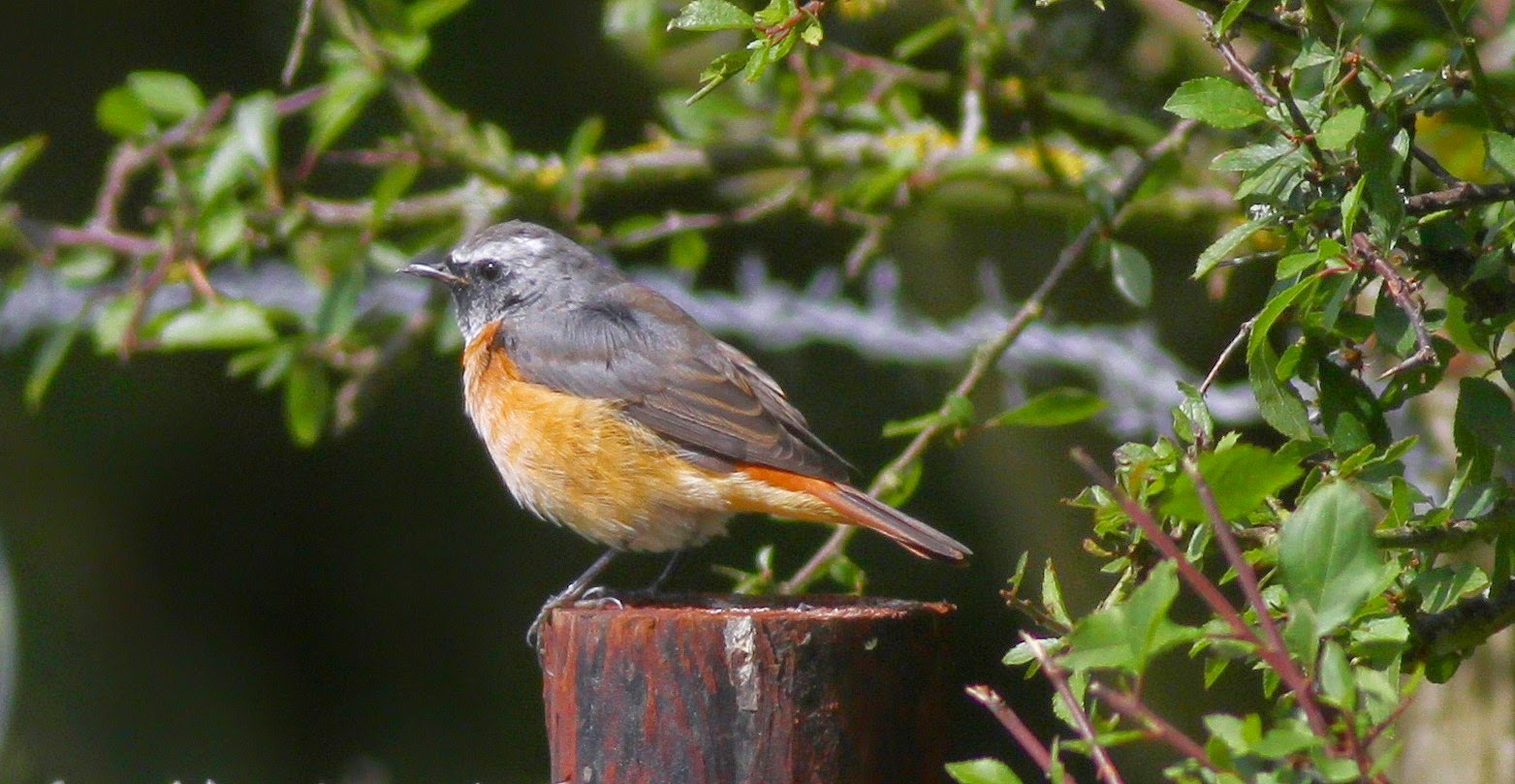 Posted by Max Silverman at 03:02 No comments: Links to this post