Since the high of seeing and getting some decent shots of a Purple Heron at Otmoor a couple of weeks ago I've struggled to catch up with any decent birds locally.In my defense there has been a couple of distractions that haven't helped.The first my back has been playing up yet again and this kept me in for a while.

The second one was I bought a new car when I had not planned to do so.Despite the fact that my 5 year old Audi A1 was playing up a bit and a couple of savings accounts both just had the interest rates reduced to laughable levels I had no intention lashing out for a new car when I paid a visit to my Audi dealership just to have a look round.

However the deal I was offered if I bought a new A1 was amazing and I couldn't resist.This was not down to my negotiating skills it was down to Audi desperate to fill their August quotas ( apparently no one wants to buy a new car till the new number plates come out in September so August is a dead month for sales).

Back to birds I did manage a few shots before Saturday but not many.

To illustrate how desperate I was I tried to turn this shot taken from the RW hide at Marsh Lane into a Golden Oriole but alas it wasn't.

This Saturday morning as soon as I got a text from Nic Barlow that 4 Black Terns were on the CP pool at marsh Lane I shot over there.Luckily they were still there but unluckily for the whole 2 hours I was there they never came anywhere near the hide so no decent shots but great to see.

Other birds around that morning were a distant Wheatear and a short staying Hobby which also would not come close. I just missed seeing a pair of Greenshanks.

Posted by Max Silverman at 00:57 No comments: Links to this post

A BIT OF BOASTING IS CALLED FOR.

I was chuffed to bits to find out this week that one of my shots of the Purple Heron I saw at Otmoor last week (see below for the shot) was chosen by both Birdguides and Rarebird Alert to be the shot included in their on line weekly reports.

I know lots of shots were taken of this bird the few days it showed so I'm very pleased my shot was chosen because it was the first time I've had a shot included in either report before.

It shows you that with a bit of luck anyone can match the big lens boys.

Posted by Max Silverman at 01:35 No comments: Links to this post

MAX GOES ON A TWITCH.

At 9.00 AM this morning just as they opened I went on a walk round the NT property grounds at Baddesley Clinton to see if any decent birds were about.I hadn't gone far when I received a text from my good friend Pete Walkden : "Am going to Otmoor for the Purple Heron do you fancy coming along"

I of course said "Yes Please" and raced back home.Not long after 10.00 AM a Skoda Yeti pulled up outside my house and off we set down the M 40.We got there at 11.15 AM to find the car park full to the brim but Pete undeterred skillfully parked on a small patch of land just over the bridge.Mind you it was so close to a ditch I had to get out the car from the driver's side.

As we walked down the main path from the paddocks a couple of birders told us it had recently flew from the right of the marsh into roughly the centre so we positioned ourselves on the path near the two ponds.

It seemed like ages had gone by just staring into the marshy field with no sign of the Purple Heron.So in desperation I started to eat a sandwich as this often gets a bird to show when you least want it to but this failed.However straight after when Pete and I both started to eat apples it suddenly sprung up and showed. Apples were dropped and cameras grabbed.A Life Tick for me !!!

It then showed on and off for the next half hour before flying a long way off to the left.With it's colouring against the brown grass in the field it was not easy to lock onto but I managed some decent shots.

Posted by Max Silverman at 10:59 No comments: Links to this post

This morning not long after 8.00 AM I set off for Draycote Water to see the Wood Sandpiper that had been near the outfall for the last couple of days.Two things worried me one being would it still be there and the other one was would my dicky knee let me get to the outfall and more importantly would it let me get back to the car park.

As I got near the outfall I met two old friends Bob (Hazell) and Keith who both told me it had just flown having been disturbed by some fishermen who were fishing in it's favourite spot.Oh Dear ! !

All was not lost because there were a few waders showing quite well in the same area.There were up to 7 Little Ringed Plovers.All juveniles I think.

There also was a lone Common Sandpiper (no shots too distant) and a lone Dunlin. 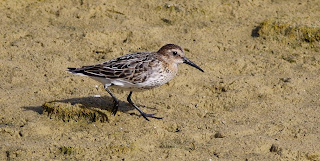 Much later on the walk back to the CP I found a Little Egret feeding on the shore line.

On or near the pontoons were a few of the larger Gulls which I of course could not ID at the time but have sent the shots of to a friend just in case there is something decent.I'm pretty certain the third one is a Herring Gull and not a Yellow Legged Gull.

Later addition : I've been told that the first is a GBB Gull the second is a LBB Gull the third is a Herring Gull and the fourth is a Yellow Legged Gull.

Well what about the Wood Sandpiper then ? Well there is good and bad news as usual.The good is it was found again.The bad is that it was a long way off and it soon disappeared again.So I still have not got a decent shot of one.These are all heavily cropped.It looked stunning through Bob's scope so it was a pity it did not come into range.

Posted by Max Silverman at 07:46 No comments: Links to this post

A COUPLE OF HOURS IN THE OAK HIDE.

On Monday mid morning I went over to my local patch Marsh Lane.I'd gone because it was exactly a week ago the GW Egret paid a visit and I hoped that it had scheduled Marsh Lane as it's Monday place to go.Of course it hadn't but worth a try to see that great bird again.

I had to be patient which is not my strong point but I did manage to get some decent shots.I think all the shots I got were of juveniles but I'm not too sure.First up were some Little Grebes that showed between a gap in the vegetation.

Next to show was a Reed Bunting that came close to the hide. 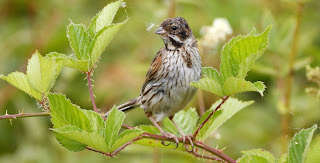 It took me a long long time to get any shots of a Sedge Warbler that showed a lot but never stayed still but I got him in the end when it came pretty close to the hide. 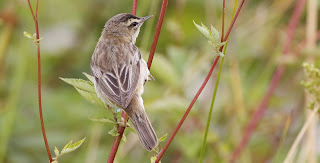 Also present but only briefly was a Reed Warbler.

The last bird that showed was a Wren that looked very grumpy.

Posted by Max Silverman at 06:58 No comments: Links to this post