PHEW ! ! MANAGED TO GET SOME SPOTTED FLYCATCHER SHOTS

As I stated in my last blog I was getting worried this Summer about getting any Spotted Flycatcher shots because I'd already checked out my best places for seeing these chaps and had drawn a blank.However not for the first time I was saved by my good friend and top photographer Kat Everitt who told me the place she had found a pair.

So early Saturday morning I set off for a churchyard in deepest Warwickshire getting there at just before 8.00 AM to find it a bright morning with not much wind but it was very cold.Within 5 seconds of getting to the right spot I saw 2 birds one hiding in a tree and one on some fencing.They were both Spotted Flycatchers.Yipppeee ! !

I was very lucky because after only 5 minutes I'd got a few pretty decent shots mainly because Spotted Flycatchers are very obliging as long as you don't get too close and can keep pretty still.Did I go then ?. No way I love these chaps and I stayed for quite a while watching them as they caught insects. 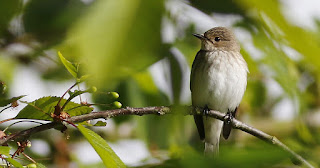 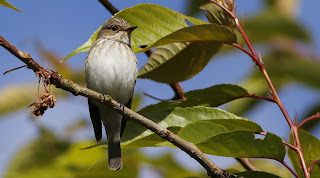 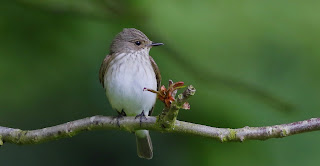 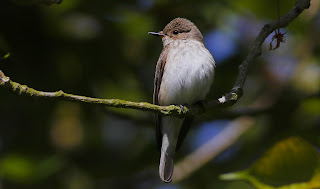 My favourite shots of the morning were taken when I caught one collecting nesting material.

Posted by Max Silverman at 03:17 No comments:

Although I've been out most days since my last blog whenever the weather allowed I've struggled a bit to find  any decent birds to point the camera at.

The Med Gulls showed well at Marsh Lane last weekend and it was nice to get them close together  but other than that I've struggled a bit.It was nice for a change when a Common Tern came close enough for a decent shot. 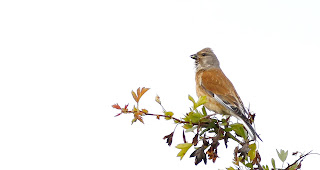 This week has been a bit depressing as I've visited three of the sites were I usually find one of my favourite birds Spotted Flycatchers but at each place I drew a blank.I will try again soon but I am not hopeful.

The good news came yesterday morning at Marsh Lane when at long last I got some decent shots of a Reed Warbler for the first time this year.It's only taken me to the end of May.Cracking birds ! ! 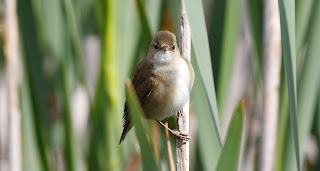 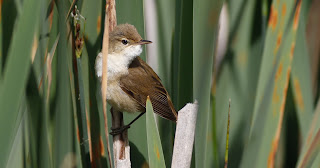 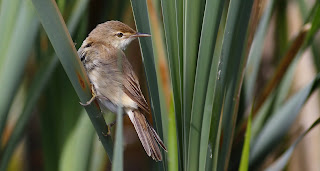 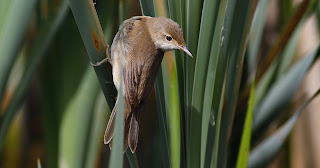 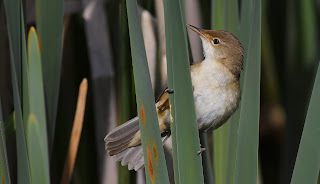 Posted by Max Silverman at 01:29 No comments:

Having wasted most of Thursday visiting some of the sites where I usually see one of my favourite birds Spotted Flycatchers and failing badly I was keen this morning to go out with the camera and take some shots.

Got to Marsh lane not long after 9.00 AM and surprise surprise the wind was not blowing and it was very nearly warm.Got a nice Linnet along the causeway.

From the Oak hide there was a Dunlin but the miserable so and so remained distant all morning.The male Ringed Plover has found a mate but still was showing off a lot by whizzing round the pool.

From the RW hide a Common Whitethroat posed for shots.

Both Med. Gulls were present but were miles away or flying around.

Posted by Max Silverman at 07:59 No comments:

I've been down to Marsh Lane a couple of times since my last post on Monday afternoon and this morning.On both occasions it was gloomy damn cold for the time of year and that persistent wind was still blowing strongly.Where on earth is this global warming.

On both visits I couldn't find anything new so I thought I'd concentrate on getting some flight shots.I was also keen to practice getting flight shots because with this new camera I am unable to get any active focus points when using any of the multi focus point settings.I am stuck with using a single point focus which makes it harder to lock onto a bird in flight.

Not far from the RW hide I spotted a very high flying Sparrowhawk that you could just see had just caught something.

A bit later on a Kestrel flew across the field near the Oak hide.Not great shots but pleasing as they were taken in gloomy conditions.

From the Oak hide a Ringed Plover was flying around like a lunatic which was an obvious challenge to me to get some shots.

The next challenge was to try and get some Swift shots.To have a decent chance at getting a half decent shot of one of these chaps you need the sun out and behind you.There was no sun today quite the reverse in fact.Also what is useful when going after these chaps you need to be able to do heavy duty swearing.The good news is that you will be able to increase your collection of blurred grey blob shots.

Back in the CP hide I had a go at getting shots of of the Hirundines that were zooming round over the water.Didn't do too well but good fun.

Posted by Max Silverman at 07:08 No comments:

Popped down to Marsh lane after lunch yesterday to try and get some more convincing shots of the Med Gull that was on the RW pool for a while on Friday morning.

After photographing the wrong bird for a while I eventually got onto it and managed a few shots which unfortunately were taken looking into the sun.

Myself and Steve and Phil then had a raptor hour.First a mystery bird was chased off the RW pool by some Gulls.It was Common Buzzard size but not one so we hope we did not miss something good.Quite quickly after that a Peregrine flew over the RW pool too quick for me to get a decent shot.

As we walked along the causeway a Sparrowhawk burst out of a nearby bush and flew down the main path.It had something pretty big in it's mouth.Then from the car park a Kestrel flew over without hanging around unfortunately.

Posted by Max Silverman at 00:13 No comments:

My hotel served breakfast from 7.30 AM so I was able to park up at Ham Wall by 8.30 AM on Wednesday morning.Unlike the day before the weather was superb it was sunny,warm and above all it was not windy.A great day to get some shots then.Well you would think so but as often happens when the conditions are great for taking shots you don't do so well.I didn't know this as I walked down the main path to Shapwick Heath NR with a smile on my face.

There were the usual Black tailed Godwits and a lone Dunlin on the Meare Heath scrape but far too far off for my lens.I then headed to the Meare Heath hide but after an hour all I'd seen and taken shots of was of a distant Cuckoo and when it eventually flew off I was in zombie mode and missed getting a decent flight shot.Oh Dear ! !

I then headed to the viewing platform near the Noah hide where you can see the nesting Marsh Harriers. I saw them OK during an hour's patient wait but they never came close so no shots.I did have a bit of luck when I popped into the Noah hide just as a Grey Heron had caught a huge fish (apparently a 2lb. Roach).How on earth it swallowed the fish I don't know.I bet it didn't need to eat again for a couple of weeks. 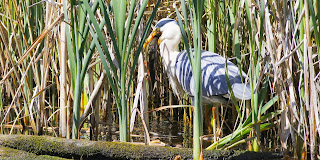 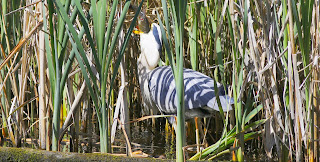 As I headed back to the car park to have lunch I noticed a GW Egret was on the Meare Heath scrape also having lunch.It was interesting  to see that it was a courting bird with a black bill and with red tibias.

After lunch I headed to Ham Wall and ended up at a small hide at the end of a long path.I'd gone there because the day before the Hobbies seemed to favour that area but after a very pleasant stay for a couple of hours I never saw one which was surprising as it was Hobby weather and there were plenty of Dragonflies about.

When I sat in the hide right in front of me in the reeds was a GW Egret but it flew off before I'd raised the camera.The reed bed at the back of the hide had a couple of nesting Marsh Harriers but surprise surprise they didn't come close.A Kingfisher was nesting in the bank of a small dyke that ran along the reed bed but it was nesting my side of the of the dyke and I couldn't see it so no shots.

Even more annoying was a Cetti's Warbler that was nesting some where in the bushes that were around a small pond at the back of the hide.It's constantly called out it's challenge to me " Hey Tog You can't get a shot of me" and it was right I didn't get one shot of it despite it coming close several times.It wasn't all bad news I did get to see several Bitterns and a few GW Egrets flying around.A great spot shame I didn't do as well as I hoped.

On Thursday morning I had to abandon my plans to spend the morning at the Westhay NR before heading home because the forecast was very poor.As I left the hotel car park the first raindrop landed on my windscreen and it never stopped all the way home.A very good couple of  days though.Great place.

Posted by Max Silverman at 03:38 No comments: