A BREWERS DUCK AT MARSH LANE.

I very bravely went to Marsh Lane on Monday morning when the weather was bitterly cold and despite layering up well I soon got very cold.The temperature was zero when I arrived and there was quite a lot of ice on the pools.

Didn't see much till I got to the Oak hide where my good friend Jeff Rankin pointed out an unusual duck on the railway pool.Here are a couple of very cropped shots of it.

This duck has shown a few times at Marsh Lane during the last couple of weeks but it was the first time I'd caught up with it.It is known as a Brewers Duck and has quite a history.

John James Audubon a well known 19th century American birder announced that he had found a new species of duck when a single male was shot on lake Barataria in Louisiana in February 1822.He named it after his good friend and birder Thomas M Brewer.

However by 1843 John James Audubon was having second thoughts that the duck was a new species but it wasn't until 1943 that it was established that the Brewers Duck was in fact a cross between a Mallard and a Gadwall. Interesting stuff.Thank you internet.

Stayed for a couple of hours and watched the ringer in action.Again he caught loads of birds mainly the more common Tits but also a few Redwings , a Goldcrest and best of all for me a couple of Redpolls which were the first for me this Winter.It's pretty sad that nearly all of my recent shots of decent birds have been caught by the ringer and are taken in his hands.

You can see how gloomy it was by the fact that these two shots had to be taken at ISO 6400 when you would hope to go no higher than ISO 800 if you want a decent shots. 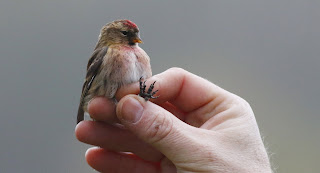 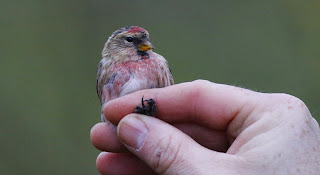 Also on the reserve on Tuesday were a flock of 30+ Siskins in the back gate coppice area and 100+     Redwings that were in the Oak trees near where the beehives used to be.
Posted by Max Silverman at 05:41 No comments: Links to this post

A COUPLE OF VISITS TO MARSH LANE.

Desperate to go out with the camera before it rusts up with lack of use I've popped over to Marsh Lane a couple of times this week despite the weather being pretty grim.

On Monday morning I hoped the Short Eared Owl seen on Sunday was still about but of course it wasn't and I struggled all morning to find some thing decent to point the camera at.The only shots I managed before the rain arrived were of the hybrid Whooper Swans.

I went again pretty early this morning hoping the overnight strong winds had brought something in but I and a couple of other birders couldn't spot anything.The hybrid Canada Goose was on the CP pool again.

I did get my first sighting this winter of some Yellowhammers but I couldn't get close enough for a decent shot.Great to see though.

Just as I was leaving I spotted my first Fiedfare of the winter and managed a few so so shots.Again nice to see.

Posted by Max Silverman at 06:00 No comments: Links to this post

A VISIT TO BRANDON MARSH.

As soon as I  heard that onThursday morning the weather was going to be good I decided in order to break the bad run I was having with the camera I would make a visit to Brandon Marsh.
I hadn't been there for quite a while mainly due to the roadworks at the Toll Bar island making my journey much longer.

In order to beat the heavy traffic near the several schools I have to drive past to get there I very shrewdly set off at 7.30 AM.This of course didn't turn out to be a good move because I got caught out badly by the heavy worker's traffic.Oh Dear ! !

After a pretty slow journey I got there at just after 8.15 AM .There was very good news as I started to walk around the reserve the weather man was right for a change it was a cracking early winter's morning sunny not too cold and only a light breeze.

Great for taking shots then ? Well yes conditions were great for taking shots but the trouble was there were no decent birds to point the camera at.This was despite staying for nearly 4 hours visiting all the hides and walking round most of the reserve.All the birders I met said the same and also were having no luck.

This was the first time for a long while that I didn't use the camera at all during a long stay at a reserve mind you in fairness to Brandon Marsh there were a lot of Redwings around but I couldn't get close to them and a Pintail was on an island on the EM pool but remained asleep.I did see a Treecreeper, a Nuthatch and a Goldcrest on my walk round the wooded areas but I couldn't get a shot of any of them.

The working party was working on the Carlton Pool trying to clear the weed that has choked up the pool recently.The water had been drained to help them but what a difficult task to get rid of this persistent weed. I was surprised how shallow the pool was.

Right so no luck with the camera again but the trip was not a waste of time because it was very enjoyable walking round in the excellent weather.
Posted by Max Silverman at 02:09 No comments: Links to this post

Except for going out in the rain the middle of last week to try and find the Yellow Browed Warbler that had been reported near Brueton Park and failing the poor weather had kept me indoors.So this morning getting very desperate to go out with the camera I ignored the poor conditions and went over to Marsh Lane.

Got there not long after 9.00 AM to find it very gloomy and very windy.It was however very  warm for November at 16 degrees.

Found a lone Common Gull on the CP pool but nothing else interesting among the usual ducks,geese and gulls.

Had some very good luck in the North Causeway screen hide when just as I was about to move on a Kingfisher appeared on the reeds but unfortunately stayed for only a couple of seconds.I was lucky to get this shot in the gloom.

On the way back another look in the CP hide revealed the pair of hybrid Whooper Swans had paid another visit. 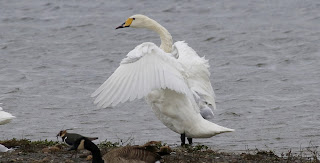 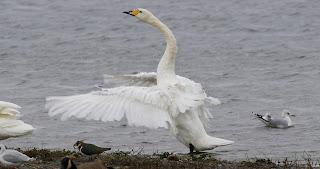 Posted by Max Silverman at 06:03 No comments: Links to this post

Didn't hear that the ringers were at Marsh Lane again this morning till after breakfast but as I headed over there at 9.00 AM I wondered if I'd made the right decision in going because the weather was very poor.

As I walked along the causeway I came across the first net which had been set up just past the screen hides.Several birds had been caught including a Cetti's Warbler.

Took a few shots in the gloomy conditions including one of the Redwings caught. 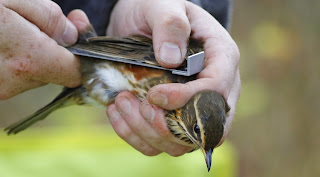 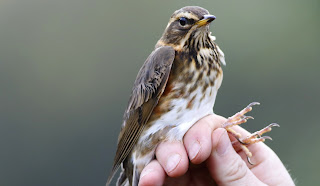 Here are some shots of one of the two Cetti's caught today.One was a new bird and the other one was ringed last Saturday.This is of the the newly ringed one.Again a female.There was a bit of a struggle getting it out of the net. 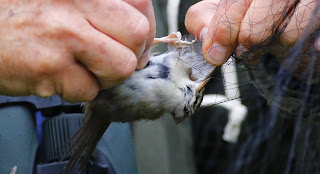 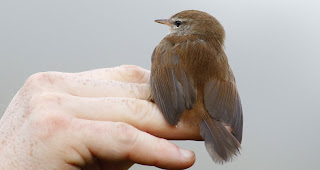 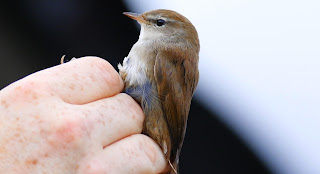 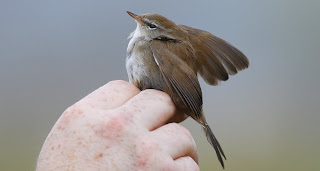 Posted by Max Silverman at 06:09 No comments: Links to this post

Last week when the weather allowed I visited some local spots with the camera hoping to get some shots but had no luck at all.The only bit of success I had was at Marsh Lane last Monday when I got a shot of one of the adult Water Rails, a late shot of a Comma butterfly and a distant shot of the hybrid Whooper Swans which were on the CP pool again.

Furthermore despite searching around for quite a while I failed again to see or even hear the Cetti's Warblers that are on site.

Things improved a lot when I attended the ringing session near the back gate coppice early on Saturday morning.When I arrived the ringer was processing  a Redwing which I didn't recognize straightaway because it looked much smaller in the hand. 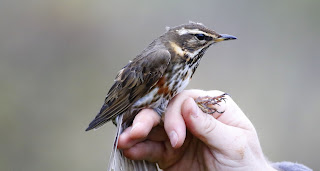 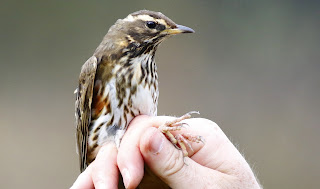 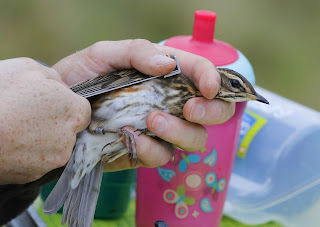 In the couple of hours I was there the ringer caught quite a few birds (mainly Redwings) but the star for me was a female Cetti's Warbler. 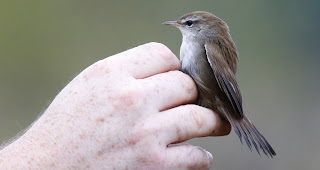 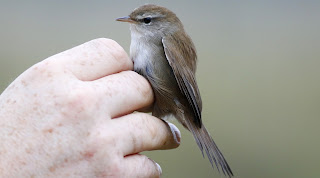 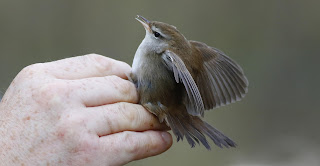 The ringer had with him a very young assistant.She handled the birds very well mind you when asked to guess my age she thought I was 102. 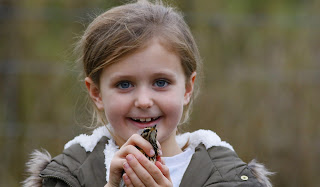 Posted by Max Silverman at 01:33 No comments: Links to this post