BRAVED THE COLD THIS MORNING.

It was very cold this morning but the sun was shining so I grabbed the camera and headed over to Marsh Lane.Got there just before 10.00 AM with the temperature at a very cold -2 degrees C.

There was plenty of ice on the pools but still some open water. Didn't find the Cetti's Warbler this morning and after over an hour in the bitter cold the only shots I'd got were of a Robin, a Bullfinch and a Reed Bunting.An old friend was way off in the distance on the CP pool the Pochard with the beak saddle who had probably come to overwinter again. 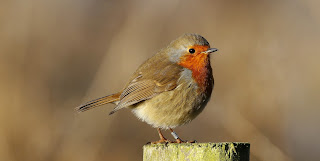 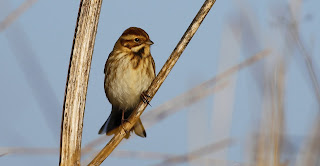 On the walk back to the CP I found a flock of 20 + Yellowhammers along the causeway and round the car park which enabled me to get my first shots of the year.

I understand from Graham who had done a count that there were 591 Teal on site this morning which is a record for Marsh Lane.
Posted by Max Silverman at 06:13 No comments: Links to this post

THE MARSH LANE CETTI'S AT LAST.


Popped over to Marsh Lane again this morning getting there just after 10.00 AM to find it sunny but very cold.

Didn't have much luck with the camera till I ended up in the river hide.Thought I'd got something special perched on top of a distant tree but it turned out to be a pale Common Buzzard.

Luckily for me I was in the hide with Paul and Glen because they heard a Cetti's Warbler calling.It took a while but it finally showed in the reeds at the edge of the RW pool. Didn't get any great shots but but I was pleased as they are decent considering the bird was in the gloom of the reeds and in any case they are the first Cetti's shots I've taken for a few years now.

Posted by Max Silverman at 06:38 No comments: Links to this post

A BAD VIEW OF A JACK SNIPE.

Yesterday sun was forecast for the morning so off I popped to Marsh lane again.It turned out to be a morning of good and bad news.The first being that the weather when I arrived was sunny and calm but very cold with some ice about.

There was good news along the old road when I spotted about a dozen Yellowhammers.I carefully drove a bit closer and parked up with the camera ready but just as they were coming into range the bad news arrived when a car drove past me and parked right where the birds were.They flew off of course and all I got was this shot.

A bit later in the Oak hide with Jeff, Graham and Glen this sleeping "Snipe " was spotted right at the back of the marsh.We debated for quite a while if it was a Jack Snipe or not.

The good news was that when it woke up and started bobbing it was a Jack Snipe.The bad news was that it immediately turned round and disappeared into the reeds not to be seen again.All I got were some crappographs but nice to see my first one of the winter.

Posted by Max Silverman at 01:31 No comments: Links to this post

MARSH LANE IN THE SUN.

Yesterday as soon as I saw that it was sunny I popped over to Marsh Lane again getting there at 10.00 AM.It was still sunny but there was a chill breeze blowing.

Typically when it is bright and great for getting some decent shots finding something good to point the camera at was very hard.Both pools were very busy with Geese and Ducks but I could not find anything new.

There was a Common Gull on the RW pool but it didn't stay long.

There was a Herring Gull also on the RW pool which I didn't realise until I checked the shots on the laptop had a problem.A hook and line ??? It had a go at getting rid of it which it did I think.

Posted by Max Silverman at 03:38 No comments: Links to this post

STILL DIFFICULT OUT THERE.

Went to Marsh Lane this morning getting there just before 10.00 AM to find it overcast, clear and not too cold.

However only 30 minutes later it had become bright but a mist descended and it became colder.Had a good look round but could not see anything decent and in any case it was a bit gloomy to get any shots.

Had better luck the day before when searching the local berry trees for Waxwings (no luck) I came across a lone Fieldfare and managed some decent shots.

Posted by Max Silverman at 06:06 No comments: Links to this post

THE BACK GARDEN AND MARSH LANE.

I used to be able to boast about the birds that visited my back garden but the last couple of years have been very poor to say the least.This winter has also been poor so far but earlier in the week for just half an hour a mobile mixed flock of birds did pay a visit.

It was very gloomy and wet and all I got were some poor shots of a Redwing and a Blackcap both taken through an upstairs window.Better than nothing though.

The sun came out at long last on Wednesday morning so I popped over to Marsh Lane again getting there just after 10.00 AM.

The car park pool had hundreds of Geese and Ducks on show but I could not find anything decent other than a distant Common Redshank which was a nice find.

There were about half a dozen Common Snipe on the islands

The Hybrid Canada Goose was also on site again

Best bird of the day was a Stonechat that stayed miles away in the middle of the field the other side of the river.Here is the worst shot ever taken of a Stonechat.

A Little Egret flew on to one of the CP pool islands.

Posted by Max Silverman at 05:55 No comments: Links to this post

Had no intention of going out with the camera on Friday as it was very damp and gloomy but I had to pick up a prescription in Knowle so I thought I might as well have a quick look as I'm out.Got there just before 10.00 AM to find the place empty and the weather as expected overcast and damp.

Did have some luck along the old road where I spotted some Redwings in the trees just past the cottages.Got some decent shots considering how gloomy it was. 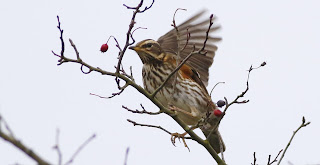 There were some more Winter Thrushes along the causeway but my search for a Dusky Thrush failed.Did get a distant shot of a Fieldfare though.

Spent a long time on the Oak hide waiting patiently for something good to show in the marsh but did not see a single bird.Had a bit of luck in the CP hide when I spotted a male and two female Goosanders at the back of one of the islands.A bit distant for decent shots but nice to see all the same.

The only other shots I managed were of a Cormorant that came fairly close.

Posted by Max Silverman at 03:36 No comments: Links to this post

NOTHING WAS PLAYING BALL.

When I started this blog I decided I would post a report even when I had a poor day out with the camera.This was a good decision as lately I've had a lot of poor days out with the camera and yesterday was no exception as nothing was playing ball.

I paid another visit to Marsh Lane yesterday morning getting there just before 10.00 AM.The weather was the first thing not to play ball because the sunny weather in Knowle as I set out had gone and it was misty and very damp.

Thought I had spotted a rarity on the CP pool ( a cross between a male Mandarin and a Mute Swan) but alas no.

It wasn't till I was in the RW hide with my good friend John Hunt that I had cause to switch the camera on when John spotted a very pale Common Buzzard a long way off down the tree line but it didn't play along and never came any closer.Would have made a decent shot.

A Sparrowhawk also was in the railway embankment trees and a long way off.It also didn't play ball and when it flew off it was away from us.

A Kestrel also didn't play ball when it flew over the causeway and headed away as fast as it could.

Had a bit of fun trying to get some shots of a Wren from the N causeway hide.It was not easy as it was hopping around all the time.Certainly not keepers but I was quite pleased with the shots as it was very gloomy in the reeds. 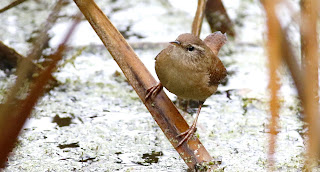 As I drove out of the CP gate I spotted a large flock of winter Thrushes that were flitting around the trees along the old road.Tried for ages to get some shots but the birds would not play ball and were far too lively for me to get a decent shot.This is all I could get.

Posted by Max Silverman at 03:44 No comments: Links to this post