A WREN AND A GOLDCREST.

Popped down to Marsh Lane on Monday morning after doing the weekly shop.It was a bit gloomy and still pretty cold so didn't stay long.

The only shots I took were of a Wren that came close to the oak hide.I did not see much else.

After having the boiler serviced this morning (the engineer arrived right on time) I grabbed the camera and not wanting to go to Marsh Lane again I drove over to Earlswood where I'd seen that some Goldcrests one of my favourite birds were showing well.

I didn't do any good there probably due to it being misty and again very cold.Still wanting to get some Goldcrest shots I headed back to Knowle and went to a spot where I'd seen them last year.Luckily I found a pair that were hopping around in the trees.

As usual they were often too quick for me and I got loads of blurred twig shots but did manage a few decent shots.Cracking birds ! !

Posted by Max Silverman at 07:09 No comments: Links to this post

NOT MANY DECENT BIRDS AROUND.

There was a Little Grebe near the causeway hide that struggled for a while to swallow it's lunch.

A very pale Common Buzzard appeared over the CP but as usual with these chaps it flew away and not towards me.

Posted by Max Silverman at 01:12 No comments: Links to this post

WINTER BACK AT MARSH LANE.

Went over to Marsh Lane early this morning getting there at 8.00 AM to enjoy the sunshine before it clouded over.This turned out to be a bad move because although it was sunny there was a very strong and bitterly cold wind blowing.

The wind that blew through the hide flaps was so cold that even the hardy birders couldn't stay in the hides for long and soon joined us wimps outside.

The Chiffchaff along the streamline and the Cetti's Warbler from the causeway hides both gave me the runaround again so no shots.The only success I had before I raced back home was with a Yellowhammer in the trees near the CP feeders.

Posted by Max Silverman at 07:03 No comments: Links to this post

EXCITEMENT IN THE OAK HIDE.

Went down to Marsh Lane mid morning on Monday and as what often happens when the weather is great for getting decent shots I didn't manage any.The Cetti's Warbler and a Chiffchaff both gave me the runaround all morning so no shots.

This morning I had much better luck.In the oak hide a sleeping Jack Snipe was on view not that far from the hide in the marsh and a couple of Med Gulls were on the bank of the island to the left of the hide but out of site most of the time.So for well over an hour I was shuffling between two hide flaps hoping I could get some shots.

The Jack Snipe every so often woke up briefly but you had to be lucky to get a shot.

One of the several Redshanks on site came close to the front of the hide.

These are some of the better the shots of the Med Gulls I managed.A bit distant but nice to see.

Managed a few flight shots as they flew around.

Posted by Max Silverman at 08:23 No comments: Links to this post

SATURDAY MORNING AT THE LOCAL PATCH.

Popped down to Marsh lane again on Saturday morning.It wasn't cold for a change but it was pretty gloomy.Not good for pics.

There were 8 Common Redshanks on the reserve which is a good number for early March.Managed my first decent shots of the year.

The large number of Redshanks on site caused a few punch ups and I managed a few distant shots.

Not a lot else about to point the camera at except a Little Grebe and an Oystercatcher.The Cetti's Warbler was singing out loudly from the N causeway hide but I never saw it.

Surprised to see a Yellowhammer near the car park feeders just before I left.First I'd seen for quite a while.

Posted by Max Silverman at 07:20 No comments: Links to this post

DOWN TO EARTH AT MARSH LANE.

Popped down to Marsh Lane again on Thursday morning getting there not long after 9.00 AM.With the excitement of the Waxwings of the last few days over back down to earth was the order of the day.

The GBB Gull was showing again on the CP pool.

Tried to turn this Gull into something interesting but I think it's a LBB Gull.

Pretty quiet on the RW pool.All I spotted was another Redshank and a distant Common Gull

I then spent over an hour in the river hide listening to the Cetti's Warble singing out almost continuously and sometimes pretty close but did not get even a glimpse let alone a shot.The Goosanders came a little closer enabling me to get some distant shots including one of a couple of males in a punch up.

Posted by Max Silverman at 02:59 No comments: Links to this post

FINALLY CAUGHT UP WITH THE LOCAL PATCH WAXWINGS.

Just before I set off for Marsh Lane this morning I got a text from Nick " 19 Waxwings in BGC" .I had to contact the code breakers at Bletchly Park before I knew that BGC was the Back Gate Coppice.

As I drove along the old road a trio of birders were watching 3 Waxwings in an oak tree near the CP gate but they flew off as I approached.Was I going to miss out again ??

Parked up and headed down to the BGC.On the way I spotted a Water Rail with a snack as it scurried across the front of the N Causeway hide. 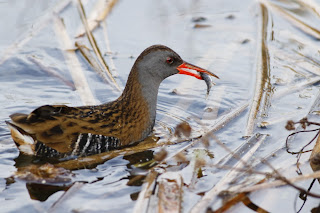 Had no luck finding Waxwings down in the BGC or near the RW hide so I trundled back to the old road and joined a couple of birders near the berry tree just past the CP gate.Didn't have to wait too long before 23 flew to the top of a nearby oak tree.A few minutes later they all dropped down to a small berry bush to feed.

Very pleased to see my first Marsh Lane Waxwings and to get some decent shots.Even managed some shots of the ringed bird (Ringed in Aberdeenshire in January so I'm told). 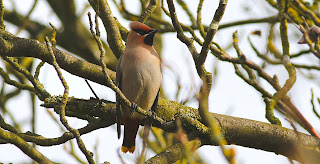 Posted by Max Silverman at 07:24 No comments: Links to this post