A RARE OCCURRENCE I FOUND A GOOD BIRD.

After nearly 2 hours the results were as expected disappointing so I took it off and when I went into the CP hide for a final look I was not in a good mood.After 10 minutes my mood brightened considerably when a Black-tailed Godwit flew in and landed on the LH island.

I duly reported in and put it out on Twitter but when it flew across to the next island I realised it was a Bar-tailed Godwit. Oh Dear ! ! !  I then had to correct my ID with a couple of texts.

Here is the flight shot that made me realised I had dropped a ricket. Good mistake to make though.

There was a male Goosander on the CP pool but the miserable so and so would not wake up.

A pair of Little Ringed Plovers were having fun in the morning sunshine.

A couple of Yellowhammers showed under the CP feeders just before I left and for once they let me get a bit closer.

Posted by Max Silverman at 07:32 No comments: Links to this post

A GOOD MORNING AT MY LOCAL PATCH.

Went down to Marsh Lane early this morning getting there at 7.15 AM hoping to beat the forecast rain.It was very cold but it was pretty bright.

Good news straightaway when the Whooper Swan from yesterday was still on the CP pool.It eventually came close to the hide so I could get some decent shots.The rusty head markings were new to me and I've been told it occurs when the bird has been on a pool with a high iron content.No idea if this is right.

My very good friend the Cetti's Warbler showed well for me along the causeway and I was able to get some more decent shots.

In an unguarded moment I got a shot of him showing how fed he is singing out day after day and not attracting a girlfriend.This brought back distant memories for me in my younger days.

My good friend John Hunt spotted a pair of Water Rails at the far end of the marsh.Managed my first shots for ages of these before they both scurried into the reeds.

Had some great fun then trying to get some flight shots of a Ringed Plover that was zooming round the RW pool at great speed.What a job that is ! ! Among the masses of blurred blob and empty screen shots I managed some fairly decent ones.

Posted by Max Silverman at 06:22 No comments: Links to this post

WOW A HOBBY AT MY LOCAL PATCH.

At a bitter cold Marsh Lane this morning I managed a few shots of a female Blackcap.

A cracking Yellowhammer was near the CP feeders but spent the whole time on the ground out of view.

By far the best find this morning was a Hobby that suddenly appeared over the RW pool mid morning.It stayed for only a few seconds before flying off east so I was chuffed to bits to grab a few shots. It was seen briefly by others as it flew past the CP pool.

Posted by Max Silverman at 06:09 No comments: Links to this post

AN EARLY VISIT TO MY LOCAL PATCH.

On Saturday morning I made an earl visit to Marsh Lane getting there at just after 7.00 AM.It was sunny but that damn cold northerly wind was blowing yet again.Did this early start bring any rewards then ? To be frank no it did not.In fact I did pretty poorly with camera a lot of it was down to me.

The Cetti's Warbler was singing out in it's usual bushes but I'm blowed if I could get a decent shot despite a patient wait.This is typical of what I ended up with.

All I could find on the RW pool was a pair of Common Terns that showed well near the oak hide.

Another long stay in the river hide hoping that the Sedge Warbler would come close enough for me to get a decent shot ended in failure.It will not come close for me but kept flying from it's favourite tree onto it's regular but distant bush.
.

I then found a pair of male Blackcaps along the streamline by the causeway but I'm blowed if I could get a decent shot of them despite being patient.They would not come out into the open.

Just as I was about to leave I was surprised to see a cracking Yellowhammer on the CP feeders.This cheered me up somewhat. 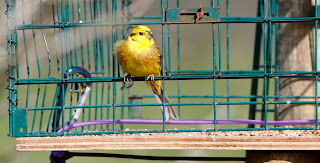 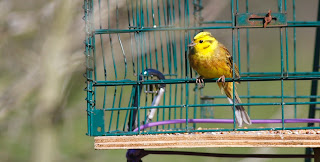 Posted by Max Silverman at 00:36 No comments: Links to this post

Thought I'd have a change from my local patch this morning so I headed off to Earlswood to try and find the Yellow Wagtails seen the day before in the horse paddocks next to the craft centre.

Got there at 10.15 AM to find it gloomy and pretty cold.Gave it nearly an hour but never found a Yellow Wagtail.Had to keep the camera warm by getting shots of a few Swallows that were around the stables.

I then headed to the donkey paddock by the Red Lion pub to try my luck. No Yellow Wagtails but I did find a male Wheatear Despite waiting patiently for while it would not close.Just as I got permission from a donkey sanctuary steward to enter the paddock it flew into a hedge then disappeared.Only got some crappographs but nice to see my first of the year.

Posted by Max Silverman at 07:13 No comments: Links to this post

SOME WILLOW WARBLER SHOTS AT LAST.

Went down to Marsh Lane my local patch again on Wednesday morning getting there pretty early for me at 7.30 AM.Again it was sunny and not too chilly.

Couldn't not match the excitement of yesterday's Osprey but did manage a few decent shots.Found a pair of Linnets on the gorse bush on the way to the RW hide.

In the area near the back gate pond at least 3 Willow Warblers were singing and since I'd not got any  decent shots of these chaps so far this year I went into stealth mode and went after them.Unbelievably I was spotted straightaway.

I had to be patient but in the end I managed some decent shots.

When I walk past the causeway hides on the way to the car park I always have a quick look.Today engrossed in a Brexit chat with my good friend Kath I didn't. There was a Yellow Wagtail on the reeds posing for shots from the N causeway hide.Damnation ! ! !
Posted by Max Silverman at 07:14 No comments: Links to this post