A COUPLE OF LOCAL TRIPS.

On Friday morning with the weather fine I thought I'd better get out there with the camera specially as the weekend forecast was not good.

As I did well on my last visit I went first to Marsh Lane getting there at 9.30 AM to find it very bright but very cold with ice on the pathways.Spent a couple of hours there and had a pleasant time especially meeting up with Kat Everitt for the first time in a while as it's great to find out what a top photographer has been up to.

On the birding front I struggled a bit to find much to point the camera at.The energetic Oystercatcher was at it again on the CP pool.Reminds me a lot of what I was like when young although my memory may be playing tricks on me. 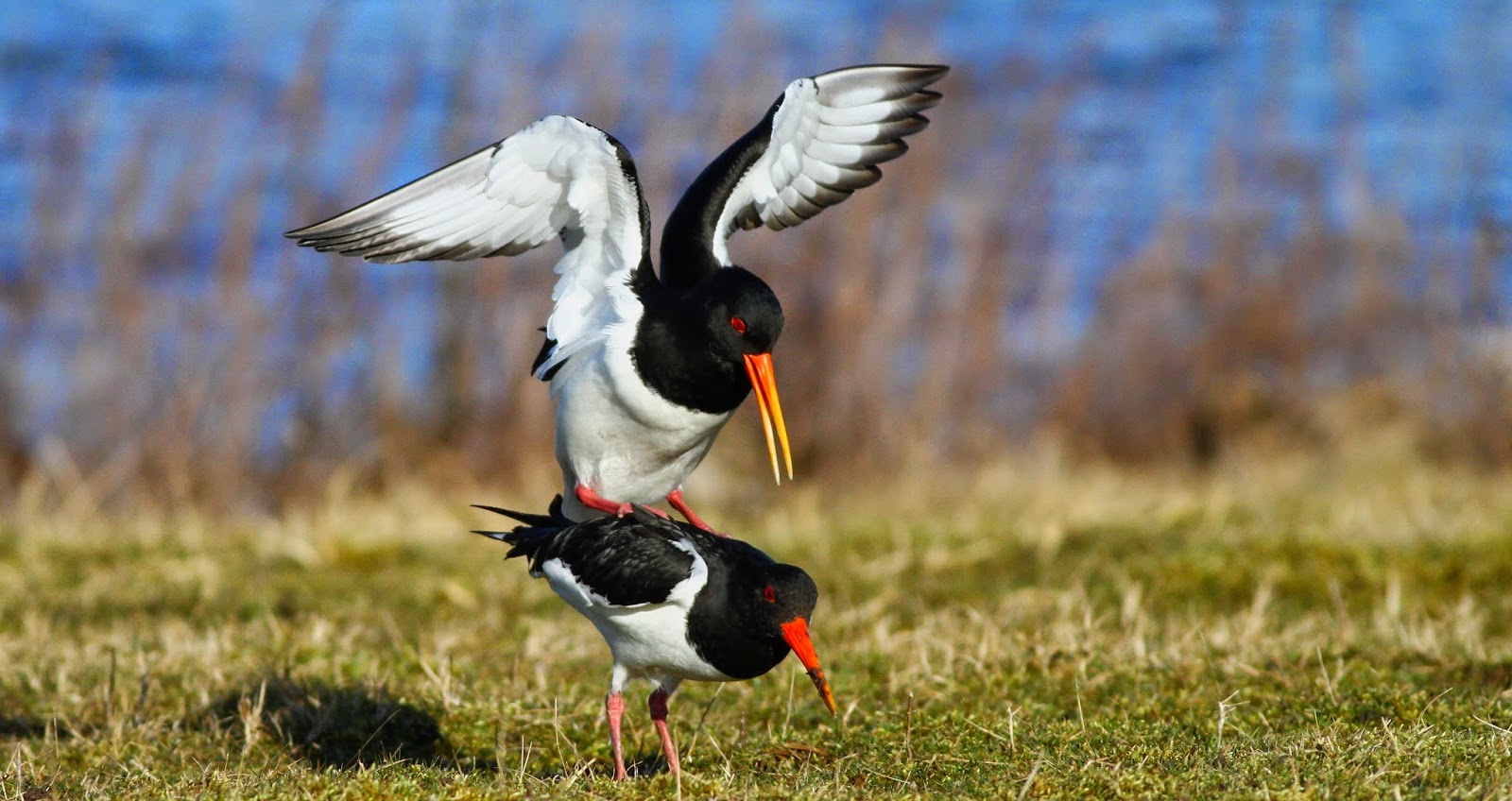 After a quick bite of lunch at home I then went to Brueton Park.Along the back path I soon spotted a Treecreeper on a nearby tree.Spent the next few minutes moving around trying to get some shots but the gloom and twigs got in the way as usual with these chaps.It wasn't till it flew off that I realised I'd been walking around in mud and my shoes were a right mess.What a burk ! ! Got some shots though.

I then walked to the end of the lake to see if any Goosanders were present.Found a pair asleep under the overhanging trees so I left them and headed through the cafe to the area at the back to try the Goldcrest I'd got glimpses of on my last visit.The good news was I found one straight away but the bad news it wasn't long before a group of mothers with very young children picked this very spot to play in.My little friend flew off but I did manage some shots. 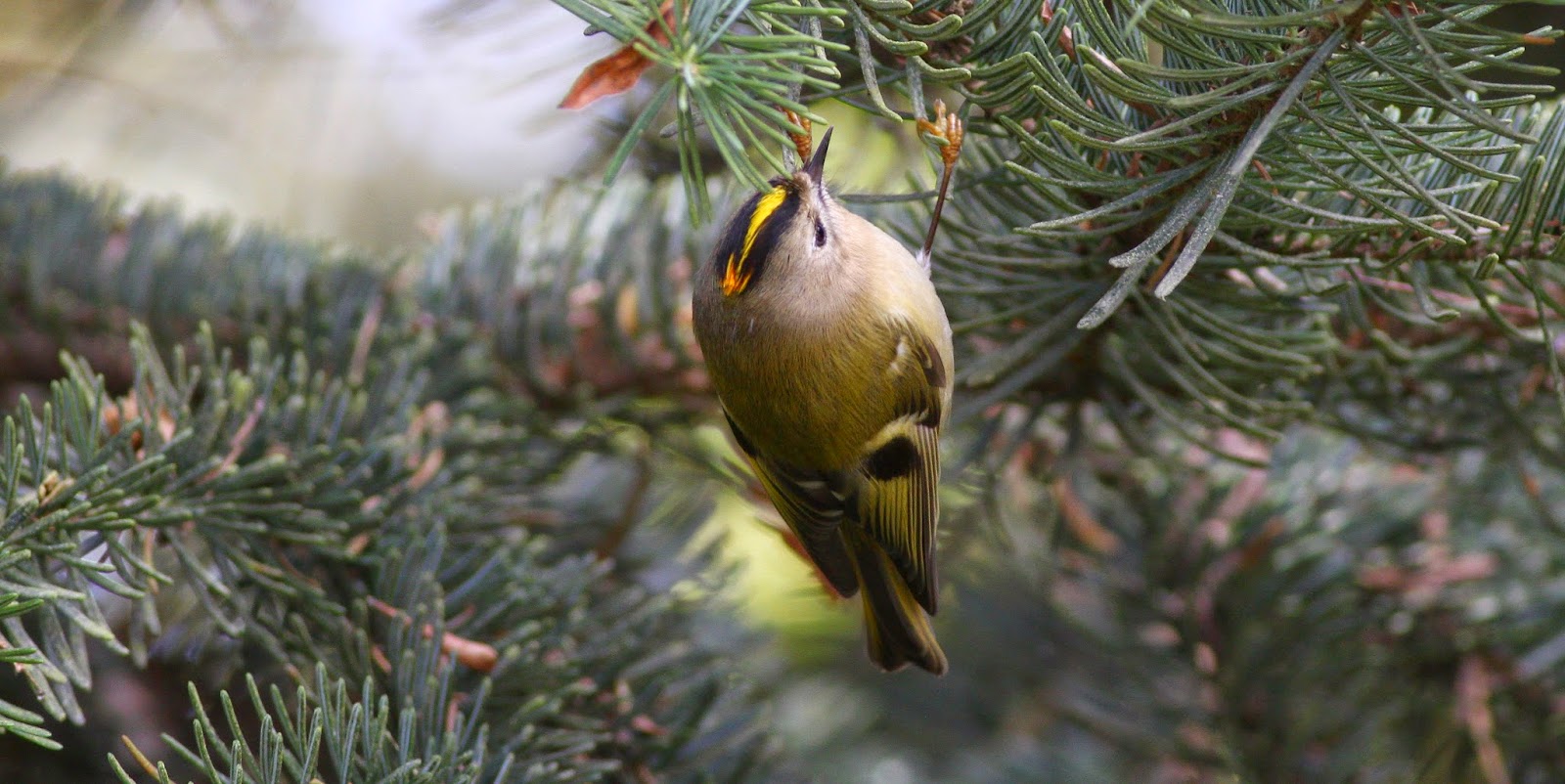 After this catastrophe I headed back to main lake to see if the Goosanders has woken up.They had so I rattled off some shots of these cracking ducks but yet again I struggled to get any decent shots of the male and I've run out of excuses because the Goosanders came pretty close and it was bright.I cannot get the male's head colour showing well without blowing out the whites.Do OK with the females though. 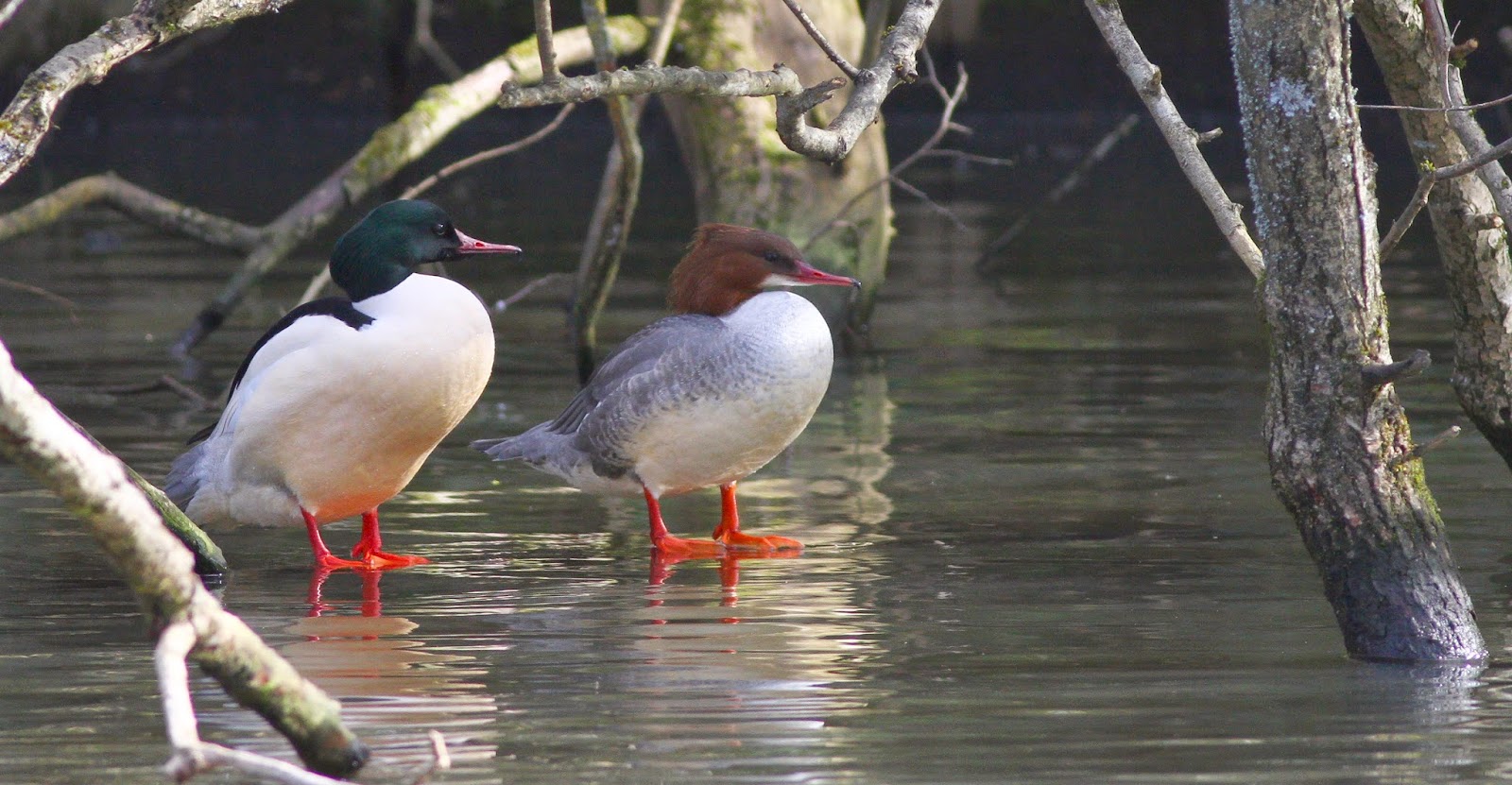 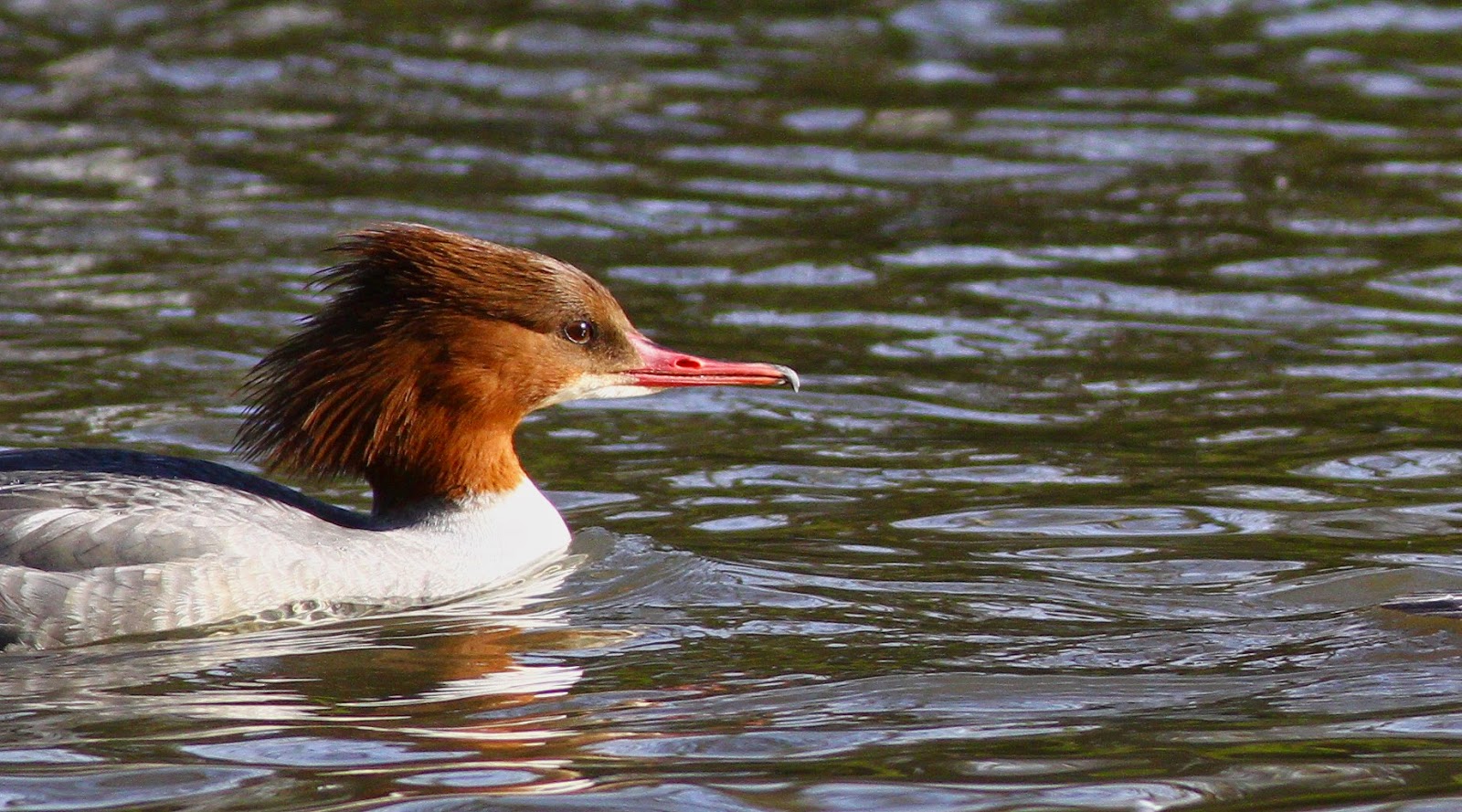 Posted by Max Silverman at 07:42 No comments:

A PLEASANT MORNING AT MARSH LANE.

On wednesday morning I popped over to Marsh Lane for the first time for a while.Got there at 9.30 AM and as I got out the car I sensed straightaway something was different.It took me  a few seconds to realise what it was : I was not cold.This must have been the first time for months I haven't felt cold when out birding.

Met up with Brian Beasely on the main path and as we headed to the Oak hide I managed some shots of a Little Grebe that was beginning to look summery.

The marsh was full of Common Snipe ( about 40 ) but no Jack Snipe as far as I could see.There also at least 15 Common Snipe in front of the CP hide so God knows how many are on site.The Little Egret was not too far away on one of the islands preening away as usual.It must have had a big date lined up because it preened for well over an hour. 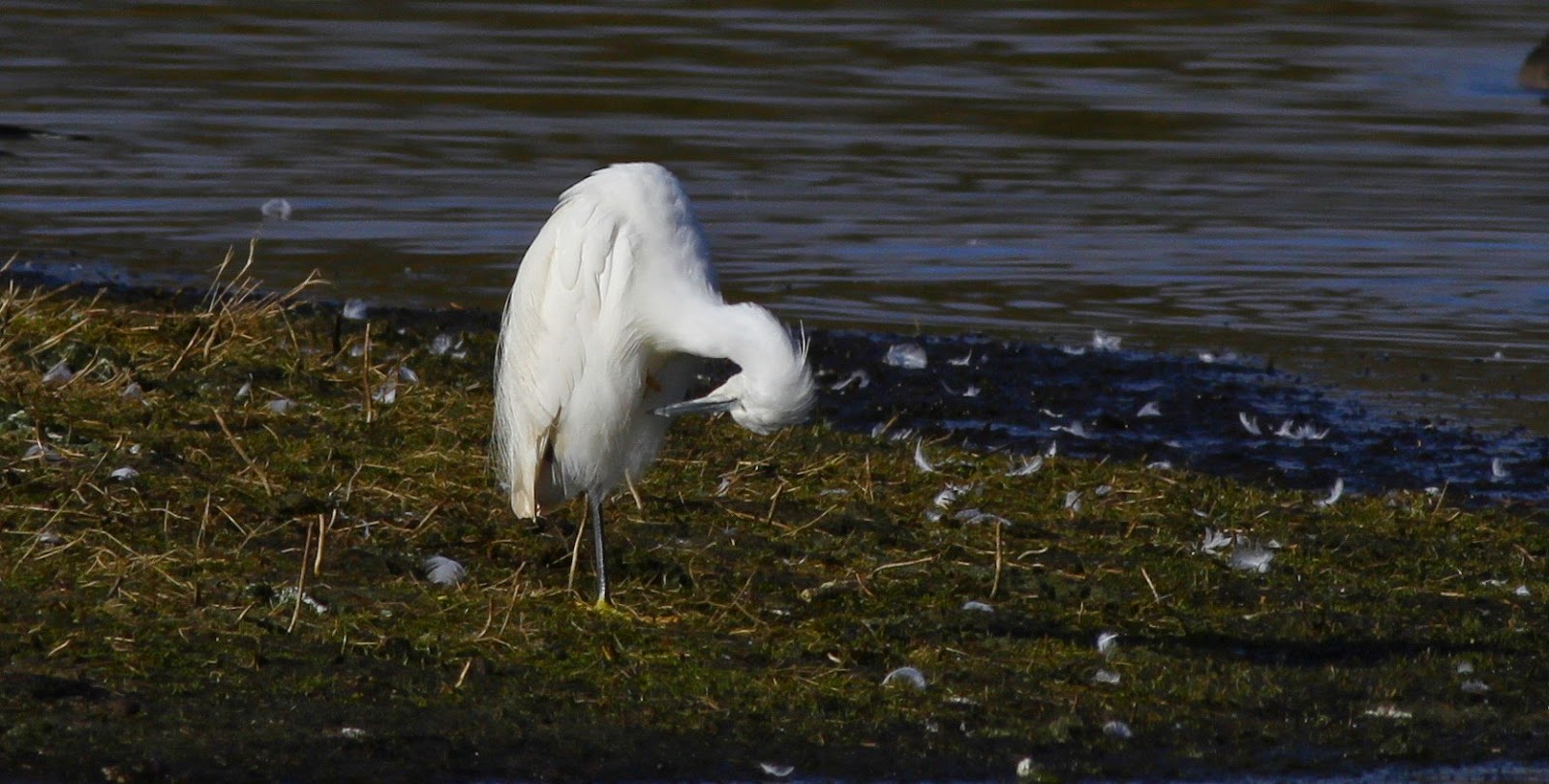 Whilst I was struggling to get shots of the Egret without blowing out the whites Brian spotted a drake Pintail cruising along with a pair of Mallards just beyond  the end of the marsh.

Thinking it might just cruise away we were surprised when it doubled back and got out of the water and walked through the reeds and entered the marsh.

Managed some decent shots of it as it swam at the back of the marsh.

Without doubt it had come into the marsh to find the Mallards and in particular to find the female who it follows around a lot.I think he's looking for a mate but has the same trouble as me he struggles to ID a female Mallard from a female Pintail.

Other birds seen were a pair of Oystercatchers who seemed to be looking for nesting spot on a RW pool island.Four Shellduck two on each pool and a distant female Goosander on the CP pool who also must have had a heavy date planned because she went into some very prolonged preening that involved diving,violent splashing and much wing flapping.Pity it was so far off.

IT'S HARD WORK OUT THERE.

This last week I've found it very hard work out there trying to find some decent birds to photograph and this despite going out several times.Mind you I haven't ventured very far.

Particularly annoying is that two of my local patches Earlswood Lakes and Brueton Park seem only to have decent birds on show when the weather is poor.Ive been to Earlswood three times this week in sunny weather to try to get some better shots of the Caspian Gull but failed each time to see it.In fact on two of the days there were hardly any Gulls there at all.It's been the same with Brueton Park I only see the Goosanders when it's a gloomy day.

I've been down to Marsh Lane a couple of times and all I got was very cold and didn't use the camera once.Did a bit better there last Friday I still got cold but did see some decent birds but it was too dull to get some good shots.Did spot a Kestrel high up on a streamline tree but it flew off straightaway.

The marsh was as usual full of Common Snipe (over 40) but no sign of a Jack Snipe.The cold had made them pack in close together for warmth.The only other visitor to the marsh was a Wren.

On one of the islands on the RW pool was a pair of Oystercatchers.They were both very cold and did one of the best things to get warm : some passionate loving ! !

From the oak hide the Little Egret showed but the miserable so and so stayed miles away.

On the CP pool there were a Herring Gull and 4 Shellducks.

The pair of Oystercatchers warmed up by their passion dropped down onto the grassed area to the side of the CP hide and posed for some shots.

To end a pretty poor week on another low point whilst waiting for the shots on this blog to download from the camera onto my laptop as I looked through the window I spotted a cracking female Blackcap feeding on the top of a bush only 4m away.It stayed for 2 minutes the shots took 3 minutes to download so no pics.Damn and Blast ! ! !
Posted by Max Silverman at 03:36 No comments:

With the weather still gloomy and miserable on Thursday I did not want to go out with the camera but after shopping all morning in Solihull I cracked and went over to my very local patch Brueton Park which is only a couple of miles away.

Got there at lunchtime to find the grim weather had put off most visitors and I had the place pretty much to myself.It was very strange and very nice not to see any dogs racing round.

I'd only got half way down the main path and already the gloomy conditions was getting me down when I cheered up considerably when I spotted a lone drake Goosander cruising around.

Followers of this blog know that I have a bag full of excuses that I open when I am unable to take any decent shots the most often used one is the distance away the bird was.I cannot use that excuse at Brueton Park as the Goosanders here do not seem to be phased by people walking down the main path.This one often came closer then 10m.The only excuse I can offer is that it was very gloomy so I burnt out all the whites.Very nice however to see one of these cracking ducks.

Posted by Max Silverman at 02:52 No comments:

AFTER THE CASPIAN GULL AGAIN.

As soon as I saw that Monday morning was going to be sunny I went over to Earslwood Lakes again to try and get some better shots of the Caspian Gull than I managed in the gloom of Saturday morning..

Got there at not long after 10.00 AM and joined Matt Griffiths on the causeway but the news was not good as the bird had not been since 9.00 AM.

Although it was sunny it was very cold on the causeway and I pretty quickly was becoming frozen stiff and very grumpy.A Grey Wagtail must have spotted my unhappiness and popped down to have it's picture taken and when it flew off I raced home to try and thaw out. 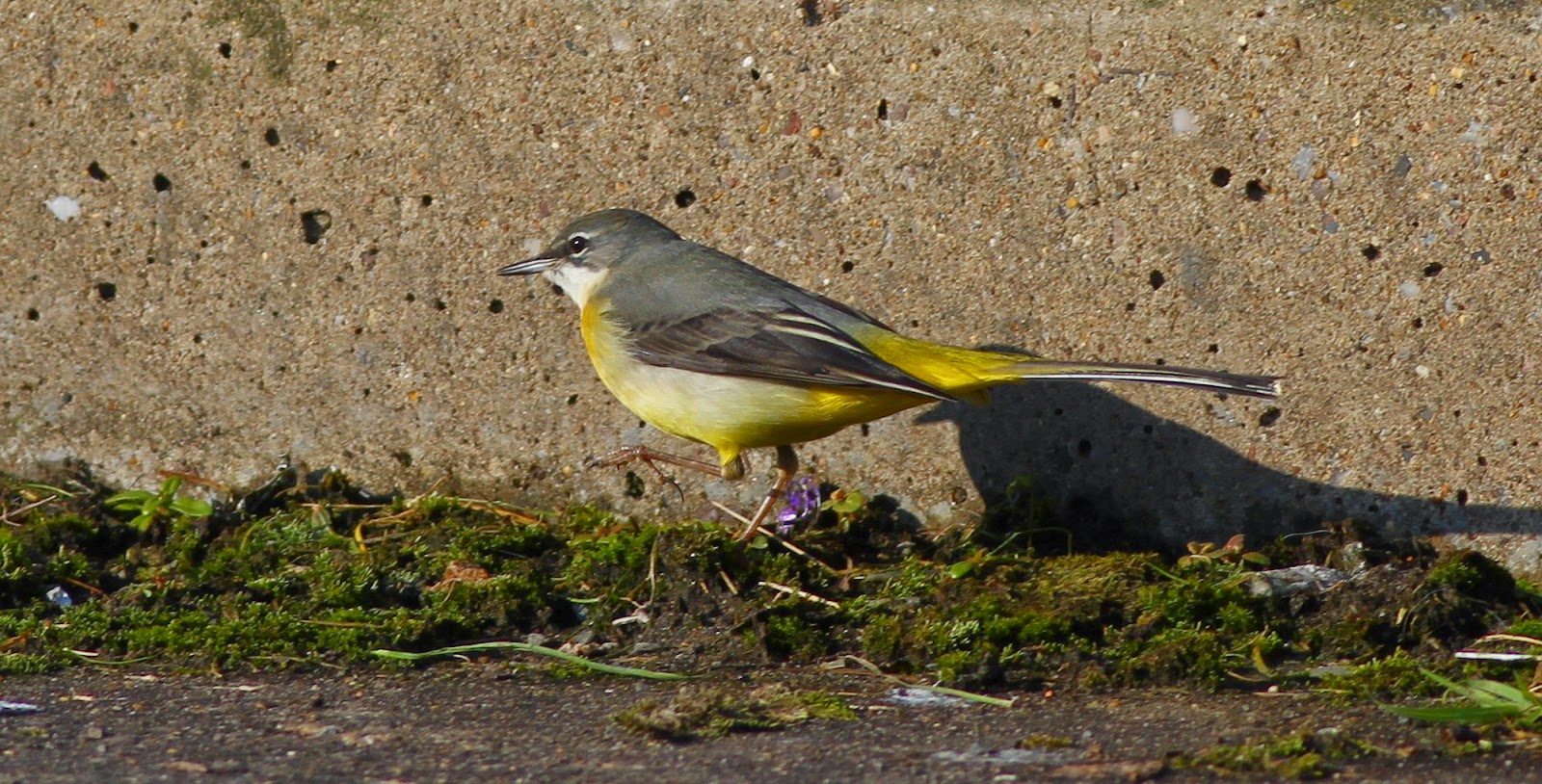 On Tuesday morning I went over to Marsh Lane but it was very gloomy,misty and damp so it was not pleasant walking around.Met up with a few birders and the conditions were getting them down as well in fact one was so depressed I'm pretty certain he was crying.

Didn't stay long and soon headed home but did see a couple of Shellduck and a distant Little Egret.

Posted by Max Silverman at 03:03 No comments: