Very pleased a few days ago when a Green Woodpecker landed in a neighbour's tree  and I was able to rattle of a few shots by poking the camera though a small top hung bedroom window.First one of these chaps I've got shots of from the house. 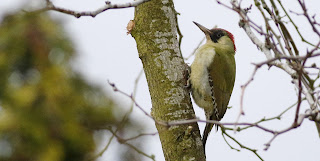 This morning I checked out yet again the last remaining local Rowan berry tree to see any Waxwings were there.There wasn't but a squabbling pair of Mistle Thrushes were gobbling up the remaining berries.Pleased to get my best ever shots of these trushes as they usually clear off before I get close.Took the shots from the car.

Managed a trio of shots showing one of them getting to grips with a berry. 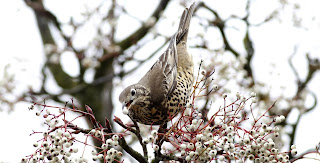 Posted by Max Silverman at 06:28 No comments: Links to this post

Fed up with failing to see any Waxwings locally this winter I thought I'd better make the effort and go further afield so this morning I headed off in pretty gloomy weather to Wolston a village not that far from Brandon Marsh.

I was not too confident of seeing one as the flock seen earlier in the month on some Rowan berries had been reduced the last few days to a single bird.Found the berry tree but was a bit dismayed to find no other birders there.Not looking good.

Parked up and waited patiently but after the best part of an hour all I'd seen on another tree was a Fieldfare.

Another half an hour went by and as waiting patiently is not my thing I was thinking of giving in when I spotted a bird high up in another tree.It was a Waxwing.I got out the car and rattled off a few shots. 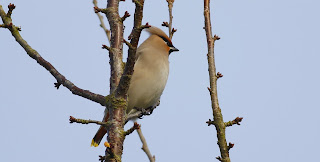 It then flew off but instead of going to the berry tree it flew to the top of the same tree.It was not playing ball.

It suddenly flew down into the berry tree.So I got some decent shots then ?  No it ate 2 berries and did this not to be seen again.Still great to see as always and I'm pleased with the shots particularly as the bird was very high up a tree.

Posted by Max Silverman at 07:03 No comments: Links to this post

NOT MUCH LUCK WITH THE LOCAL BERRY TREES.

Since early December I've been keeping my eye on the local berry trees checking almost daily for Waxwings but I've had no luck.

There are Waxwings in good numbers in the country but seemed to have missed my area (Knowle and surrounding areas) so far keeping to the north of Birmingham.

All the yellow berried Rowan trees locally are now bare the Blackbirds and Thrushes have seen to that.There are some berries on a lone white berried Rowan tree but the only birds I've seen on that tree are a couple of Mistle Thrushes.

Down one local road the Hawthorn berry trees still have loads of berries but I don't think Waxwings care for these berries.This shot taken yesterday shows that there are still loads of berries on the trees there.

Took a few shots of the Redwings feasting on the berries yesterday.No Waxwings of course and no Fieldfares showed up.

Posted by Max Silverman at 05:47 No comments: Links to this post

GREY WAGTAIL IN THE GARDEN.

Went to Marsh Lane again yesterday morning getting there at 9.30 AM.It was very cold with plenty of ice on the ponds and it was misty.

Didn't have much luck during a two hour stay.There were a trio of Goosanders on the RW pool but the ice kept them a long way off in the small area of open water.

The only other shots I took were of a Yellowhammer from the river hide.

Just after lunch when I was on the laptop in the office ( a bedroom really) I noticed a Grey Wagtail was paying a visit to my neighbour's pond.Managed a few shots which I was pleased with because to get them I have to stand on a wobbly stool and poke the camera through a small top hung opening light.It did fly into my back garden but stayed all of 2 seconds.

Posted by Max Silverman at 03:26 No comments: Links to this post

AT LAST THE MARSH LANE STONECHAT.

Went to Marsh Lane this morning getting there at 10.15 AM.There were two surprises as I parked up the first one was it was sunny and the second one no one else was there.

After an hour walking around in the pleasant sunny but cold weather all I got on the camera front was a shot of a Robin and a shot of a Grey Heron that was so close to the Oak hide the shot below is direct out of the camera with no editing at all. 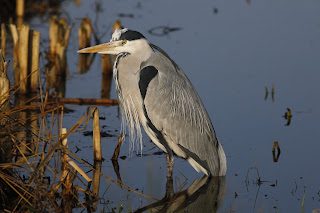 Nick Barlow and I were the only regular birders who had not caught up with the resident Stonechat. This changed for me this morning when I spotted it in a bush on the riverside of the river hide.It had gone a bit dull by this time but I was very chuffed to have at last caught up with it and able to get some shots.

The causeway has been very good lately for seeing Yellowhammers but I've found it very hard to get close enough to them to get a decent shots.Did OK this morning pity though the sun had disappeared.

This Song Thrush gave a very classy concert along the causeway at midday.

Posted by Max Silverman at 06:52 No comments: Links to this post

OFF TWITCHING IN STOW ON THE WOLD.

My good friend Kath Everitt had gone to Stow in the Wold last Saturday and got some good shots of the Blue Rock Thrush that had been showing on the roofs of a small housing estate there so this morning as soon as I saw it was sunny off I went.It would be a lifer for me.

My worry was if it was still there because I'd seen no recent reports on the internet.My worries were compounded as I drove down Fishers Close (the road where it is usually seen) and saw only one birder.I parked up and went back but the birder had gone.I checked the rooftops the birder had been checking and saw this bird a long way off.Was it the Blue rock Thrush ? I wasn't sure.

It soon flew off so I had a short walk round to check other rooftops but had no luck.When I returned to the original spot there was a bird pretty close on a rooftop.Surely not the Blue Rock Thrush I'm not that lucky. I've learned lesson not to worry about ID just rattle of a few shots just in case.

A birder suddenly appeared by my side attracted by seeing me taking shots and said "Bloody hell that's it well done".Little did he know I wasn't sure I'd got the right bird. 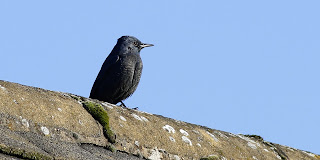 It then flew off to it's original spot so I thought I'd drive round and see if I could find it and get a closer look.It shouldn't be too hard it looked like the house it was on was down Maugersbury Park.All I'd got to do was find the house with a TV aerial.As it turned out they all had TV aerials but I eventually found the right house.

It remained partly hidden for a while but after a bit of a wait it showed much better.

Posted by Max Silverman at 07:42 No comments: Links to this post