TERNS AGAIN BUT THIS TIME A BLACK ONE.

On Friday I had no intention of going out with the camera because an old health problem had flared up again and was leaving me even more knackered than usual.So my plan was to stay in and mope.However when at lunchtime I received a bird text "Black Tern on Engine pool at Earlswood lakes" I  gathered what little energy I had and set off there.

I somehow climbed the steps up to the causeway and then had a bit of luck when I bumped into a birder who told me the Black Tern was on the island in the middle of the lake.Here is a shot of it in it's favourite spot. 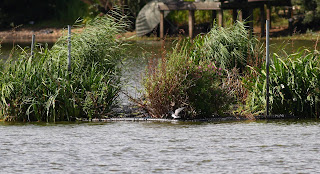 This turned out to be a lazy bird and only flew round the lake occasionally so you had to be patient which I find very hard to do.These chaps tend to zoom around very quickly but I always fancy my chances of getting a decent flight shot but only as long as they are in the sky.If they keep low with trees or the water in the background I'm buggered.This one kept low most of  the time so I was soon amassing a large quantity of crappographs. Did fluke a couple of shots of it with a fish it had scooped up. 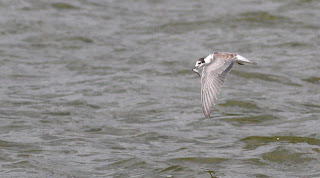 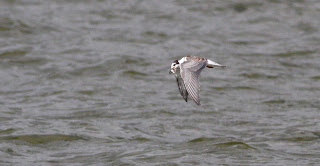 It did fly a bit higher later on to allow me to get some more shots pity though each time it was flying away. 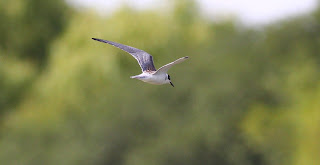 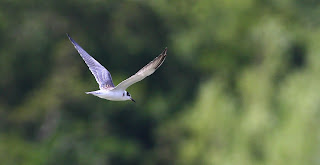 After a couple of hours my last reserves of energy were fading fast so to prevent having to call in the air ambulance I headed home very pleased to have seen a Black Tern locally.

Posted by Max Silverman at 01:30 No comments:

Feeling grotty still on Sunday morning I did not feel like walking round a local reserve so I drove over to Earlswood lakes getting there just after 10.00 AM hoping to see the Arctic Tern seen there the day before.

As I arrived on the causeway I soon realised I was under dressed as it was pretty cold and breezy.It was also very gloomy but these conditions had not put  the fishermen who were there in their droves and the sailing club were also out in force.

There were about a dozen Common Terns zooming about both sides of the causeway but I'm blowed if I could pick out an Arctic Tern.A Common Tern landed obligingly quite near and posed for some pics.Pity the light was not better. 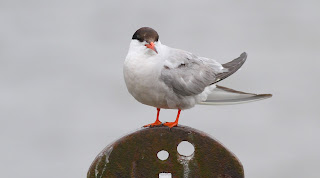 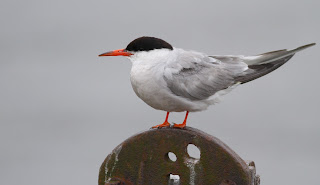 Managed some shots of one of the juvenile Common Terns flying around.

Someone else watching thought that this was an Arctic Tern but I was not convinced. 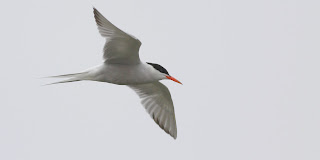 Didn't stay long as I was knackered and quite cold.What a wimp !!!
Posted by Max Silverman at 02:02 No comments:

STILL STRUGGLING TO FIND SOME BIRDS.

Although I've been out a few times with the camera since my last post it has been very quiet on the bird front and I've hardly taken any shots at all.Even allowing for the time of year it is desperately quiet with some of my favourite spots having no birds at all.

The only half decent shots I've managed recently were of a Common Buzzard that was very vocal as it cruised over the railway pool at Marsh Lane yesterday lunchtime.Let's hope things pick up soon. 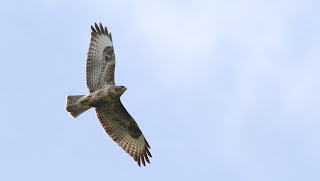 Posted by Max Silverman at 01:21 No comments:

WHERE HAVE ALL THE BIRDS GONE ?

I've been out several times this last week to local patches with the camera looking for birds to capture but have failed very badly and have not seen anything hence the question Where have all the birds gone ?

I did find a Little Egret at Marsh Lane last week but managed somehow to mess all 45 shots taken and had to delete the lot.

So I was not at all confident of finding anything at Brandon Marsh when I arrived early on Saturday morning.I had a nice walk round but after a couple of hours I had not taken one shot.Things improved a little when I found two Green Sandpipers on the Teal Pool. 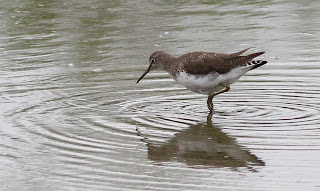 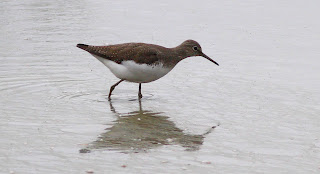 I ended up in the Baldwin hide with two fellow photographers and you can tell how bad things were because we were all delighted when a Great Crested Grebe cruised by the hide and we were able to rattle of some shots. 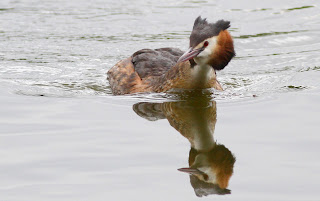 Went to Marsh Lane Thursday morning little did I know as I parked up that I would see three Wood Sandpipers on the railway pool.So I got some great shots then.Don't be silly !!! Yet again the little devils would not come close enough.

From the Oak hide I soon found the one that has been around now for nine days.It stubbornly remained in it's usual spot along the edges of the furthest island.This is typical of the shots I was getting.Oh dear !!!

When this one went out of site two new arrivals appeared first showing at the back of the channel in front of the hide.These two were even worse than the other one as they stayed even further away.I had watched the three of them on and off for nearly three hours in the heat of the day so not longer after 1.00 PM I gave up defeated still waiting for a decent shot of a Wood Sandpiper.Here are a few crappographs of the two of them together. 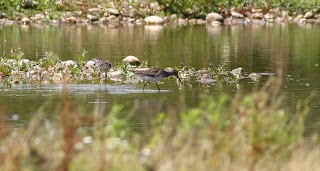 The only other birds I took shots of were a young Little Ringed Plover and an Oystercatcher that flew by the hide. 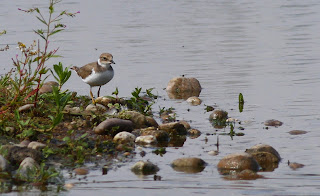 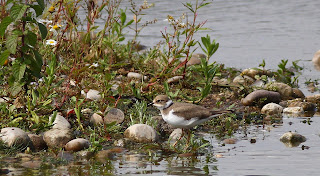 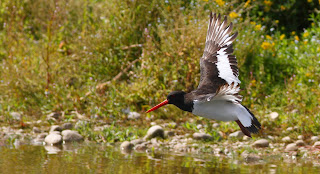 Posted by Max Silverman at 07:39 No comments: