A COUPLE OF LOCAL PATCH VISITS.

Popped over to Marsh Lane on Tuesday and Wednesday mornings to see if I could find anything to get shots of.

On Tuesday it was very gloomy and there was rain in the air.Did not do too well and the only shots I took were of a Water Rail from the N causeway hide.It was very dark in the reeds and the bird soon scurried off. 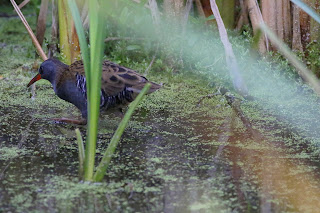 It was a bright morning when I got there on Wednesday.A Green Sandpiper was spotted on the CP pool but it soon flew off.Luckily I found it soon after on the RW pool but it was well to the right of the oak hide.Pleased to see it though as it was the first I'd seen for quite a while.Managed a few heavily cropped shots before it flew off.

The only other thing of interest was when a juvenile LBB Gull (?) flew in and was attacked by a flock of Jackdaws.

Hoping to find a Yellow Browed Warbler (fat chance) along the causeway I did spot a Warbler but I'm not sure if it's a Chiffchaff or not ?

A lone Little Egret was on the CP pool just before I left.

Posted by Max Silverman at 06:33 No comments: Links to this post

AT LONG LAST SOME KESTREL SHOTS

Dashed over to Earlswood Lakes Friday lunchtime after a Yellow Browed Warbler had been "heard but not seen" by the car park on Valley Road.When I arrived just before 1.15 PM there were no birders about and after a bit of a look round I had no luck.Did see a Treecreeper and a Nuthatch though.

Had no luck this morning at Marsh Lane (except a distant LR Plover and a distant YL Gull) till as I left the CP hide I spotted a distant Kestrel hovering well to the left of the oak tree.My first sighting of a Kestrel for many months.

Managed a few long range shots of it hovering in the gloomy conditions.

As usual with raptors it flew off but away towards the sheep field.I was just about to switch into heavy duty swearing mode when it suddenly appeared again flew to check me out.

It couldn't have liked what it had seen because it veered off and soon was way off in the distance.Managed a few more shots in the rather poor light.

Posted by Max Silverman at 07:57 No comments: Links to this post

After the rain stopped this morning I decided for a change I'd pop over to the flashes at Upton Warren.Parked up not long after 10.30 AM to find a bright rather pleasant morning's weather.

There had been a Sabine's Gull reported there yesterday but I had been told that the chances of it still being there were less than nil.This was soon proved to be correct as there were no birders about.In fact very soon I had the big hide to myself.

It was a good job that up to 15 Curlews were on show because despite  a fairly long stay in the hide there was nothing else of note about.I believe that Curlews are getting scarce these days so I was pleased to be able to get some decent shots. 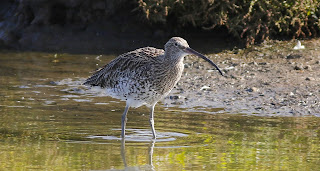 Posted by Max Silverman at 07:29 No comments: Links to this post

STRUGGLING WITH THE CAMERA.

Since the heady days of getting decent shots of a Great White Egret a Purple Heron and a Baird's Sandpiper I've been struggling to find any half decent birds to point the camera at.This despite going out quite a bit to local patches but all I've managed are a few very ordinary pics.

Mind you surprisingly the House Sparrow and the Meadow Pipit  are the first I've seen for a pretty long time. 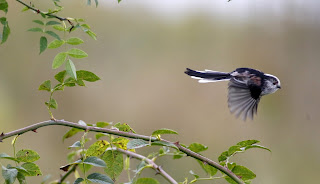 Posted by Max Silverman at 08:12 No comments: Links to this post

MARSH LANE IN THE MORNING HEAT.

This morning I resisted going after the Baird's Sandpiper again having admitted defeat in getting any decent shots so instead I went over to my local patch Marsh Lane.

Got there just before 10.00 AM to find it already pretty warm.I stayed quite a while in the N Causeway hide because it was a bit cooler in there and I was rewarded by getting some decent shots of what must be one of the last Reed Warblers still hanging around.

I was further rewarded by my long stay there when at long last I caught up with a Water Rail as it strolled across one of the channels.

It was much quieter in the oak hide and the only shots I took were of a lone Common Snipe. 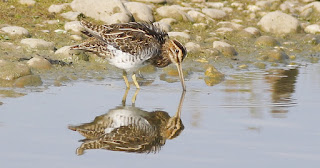 By this time I was pleased with my morning's efforts with the camera but all this changed in an instant because I missed out on a great bird.My two friends had left the hide a couple of minutes earlier when a Peregrine flew over the RW pool and while I was trying to get some shots of it what were they doing but taking shots of an Osprey from the causeway.

All I got was a this crappograph of the Peregrine and they got very good shots of the Osprey.I very nearly burst into tears.

Posted by Max Silverman at 06:43 No comments: Links to this post

AFTER THE BAIRD'S SANDPIPER AGAIN.

The plan was simple.As I struggled on Sunday to get decent shots of the Baird's Sandpiper because of the bright sunshine straight into your eyes I would go later so any sunshine would have moved round a bit.

Got to Upton Warren just after 11.30 AM and it was not sunny.So I got some decent shots this time then ? No I'm afraid not.The shots were no better than Sunday's because  the sunshine had completely disappeared and it was a bit too gloomy.Of course the bird refused to come close which didn't help.

Here are a few shots that weren't too gloomy.

It flew around quite a lot and I did get a half decent flight shot.

Posted by Max Silverman at 07:41 No comments: Links to this post

MAX GOES ON A TWITCH AGAIN.

As I sped along the M 42 early this morning heading to the flashes at Upton Warren for the Baird's Sandpiper reported there yesterday I was worried that yet again I would be too late and it had flown off in the night.

Got there well before 8.00 AM to find both car park gates closed so I had to cross over the main road and park in the garden centre CP. Met 2 guys from Bristol there and as I led them down to the hide we met a couple of birders who told us it was still there. Phew ! !

Not many birders in the hide which was a surprise and one of them was my good friend Glen Giles from Marsh Lane.There was good and bad news as usual.The bird was not too far away but the sunshine was right in front of us and all the birds including the Baird's were silhouettes.Oh Dear ! !  Should not complain because it was a life tick after all.

Took loads of shots nearly all crappographs but managed to salvage a few half decent ones.

Posted by Max Silverman at 06:43 No comments: Links to this post