After a visit to Sainsburys this morning I paid a quick visit down to Marsh Lane.It was sunny but still far too cold for this wimp.

In addition to an Oystercatcher , a Jack Snipe and a Ringed Plover two old friends who as far as I know had not been around for quite a few months were back in town the first being the Brewers Duck that was on the RW pool.

The second old friend was the beak saddled Pochard that was also on the RW pool. 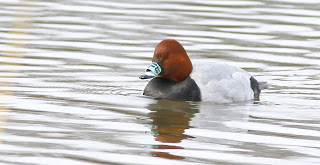 Posted by Max Silverman at 05:58 No comments: Links to this post

OUT AND ABOUT IN THE COLD.

Been out with the camera three times this week braving the very cold but sunny weather but I have struggled to find much to point the camera at.

Tuesday morning was spent at Marsh Lane.It was nice to see 6 Goosanders on the CP pool but despite being patient they would not come close.

Had a bit of ID pondering with a couple of Gulls also on the CP pool but I am pretty certain they are both Herring Gulls. 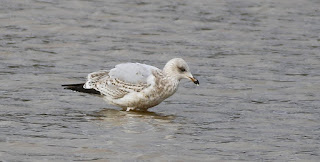 I found a Ringed Plover  on the RW pool which I think is the first of the year at ML.It was pretty flighty and would not come close.All I could get was this crappograph.

.
Got my first shots of a Siskin this winter.How pathetic is that.I was able to get close but could not get a clean shot through the twigs.

Decided on Wednesday morning to go somewhere else and went over to Brandon Marsh.I used to love going to BM but those damn roadworks at the Tollbar island make the drive a real pain and for me BM has been off form for a while now and so it proved on this visit I did not use the camera once.It was very quiet.

The visit was far from being a waste of time because BM is a great reserve with lots of different habitats and is a pleasure to walk round specially on a sunny winter's morning but as getting decent shots is top of my list it was not a good day.

On Thursday I played safe and went to Marsh Lane which is my closest local patch.Again it was sunny but very cold and I struggled to find much to point the camera at.There were 3 Oystercatchers , a lone Ringed Plover and a lone well hidden Jack Snipe in the marsh with 20 Common Snipe.Romance was in the air when a couple of Moorhens got it together in the marsh

.Took a few shots to prevent the camera seizing up. 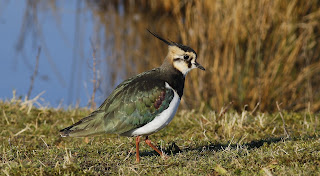 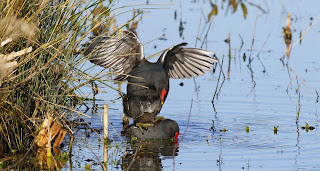 Posted by Max Silverman at 03:07 No comments: Links to this post

Popped over to Marsh Lane again on Thursday morning.It was sunny but still pretty cold specially in the hides.Had a decent morning starting off with a very brief glimpse of a Cetti's Warbler from the N causeway hide.No shots but did get a nice shot of a Reed Bunting there. 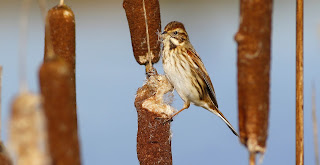 I spent an hour in the hide waiting for all three to either wake up and show better or stop preening and move to where the lighting was better for shots.Had mixed results but very nice to see some decent birds.

I must have sat in the oak hide hundreds of time but I cannot remember a Cormorant in front of the hide before. 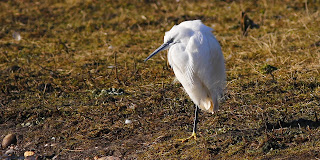 Just for a change on Friday morning I popped over to Brueton Park with the camera.There was nothing of note on the pond so I soon headed off to the cafe for a walk round the small nature reserve.

Whilst waiting for them to open up I spotted a pair of Nuthatches near the feeders.As I was trying to get some decent shots 3 members of the Screaming Kids Club burst onto the scene and the birds were off to the next county.

Had a decent walk round the reserve which is a decent place for Goldcrests.I soon found a pair but struggled to get any decent shots as the little devils were hopping around as usual.Great little birds.This is the best I could manage but as often happens going after these chaps my collection of twig shots got even bigger.

Posted by Max Silverman at 03:18 No comments: Links to this post

Went down to Marsh Lane on both Monday and Tuesday mornings and my godfathers it was very cold.My thermals were penetrated within minutes of setting off to find some birds to point the camera at.

On Monday a lone Jack Snipe was in the marsh from the oak hide.It was very close to the hide but  it was hidden by tufts of grass so great shots not possible.Still as always nice to see.

There were 4 Oystercatchers on site but they spent most of the time flying round the pools.

On Tuesday a Jack Snipe was showing again in the marsh but it was well hidden.A Water Rail crept out of the reeds in the marsh and shot across the open water to disappear in the reeds again.It was on view for only 5 seconds so I was very pleased to get a few shots.

Whilst waiting in the oak hide on Tuesday during a quiet period I got into a deep discussion about staying in or leaving the EU.Heavy stuff.I changed my mind at least 3 times.So it was a relief when Buffy showed up. 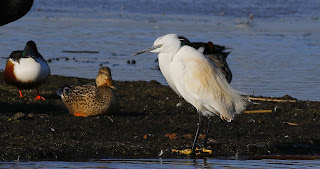 I was very impressed with Buffy when whilst it was trying to get warm in the morning sun a Swan approached it attack mode and went for Buffy .Buffy was having non of it and stood it's ground and after a bit of a scuffle the Swan moved on.Well done Buffy ! ! 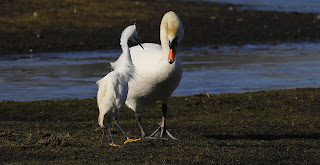 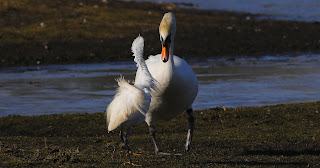 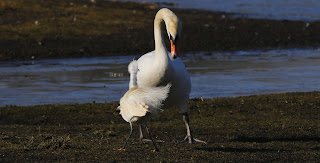 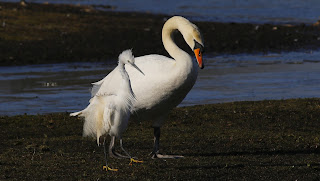 Posted by Max Silverman at 01:55 No comments: Links to this post

Either side of my twitch on Wednesday into deepest Gloucestershire for the cracking pair of Penduline Tits I have visited a couple of local patches and managed a few shots.

On Thursday of last week at Marsh Lane I got some shots of what I believe are the first of the year Oystercatchers. They did not stay long before flying off NW.

Last Tuesday a pair of Pintail were on the CP pool but despite waiting for ages and getting frostbite the darned things would not come close.This despite me shouting and swearing at them.

Yesterday I drove over to Shustoke Reservoir hoping that the ice would bring something close in.The trouble was when I got there there was no ice.However I did spot the long staying juvenile Great Northern Diver which was in it's usual spot near buoy 1.

When sometime later it started to move near the west end shore I headed over to that end to try for some shots.It of course didn't come too close but I did OK.

By mid morning the place was beginning to fill up with dog walkers who each seemed to bring more than one dog.On the walk back to the CP I didn't do too bad as only 2 dogs came close and growled at me with the owner looking on proudly.Pratt ! ! !

Other birds seen were a pair of Goosanders and a Common Buzzard who flew off before I could get close.

Posted by Max Silverman at 01:56 No comments: Links to this post

Whenever there is a rarity reported within a decent driving distance I often dither and don't go and see it straightaway.Recently another rarity was reported and again I dithered but inspired by the stunning shots taken by my good friend Pete Walkden and the fact I'd never seen one before I decided I must go and see it hoping I was not too late.

On Tuesday evening as soon as the weather man said tomorrow would be a good day I decided I would go for it.I should say go for them because at a site just south of Gloucester a pair of Penduline Tits had been favouring the reeds on a small lake.

Got up early on Wednesday and was greeted with steady rain when I opened the blinds.Thanks a bunch weather man ! ! ! Undaunted I set off at 8.15 AM and after a damp journey got to the site (only a couple of miles from J 11 on the M5) at not long after 9.30 AM.There was no one else there. Oh Dear don't tell me I'd got to find the birds myself.

After about 30 mins I spotted one low down in the reeds but it soon shot off. Great a Life Tick! ! I then had a spot of luck Pete Walkden turned up and advised that we should stand by the streamline and the pair of Peduline Tits would eventually fly over our heads and land in the bushes the other side of the stream.After a short wait they did just this but didn't stay too long and I only got this shot.

After another 30 mins they flew in again and landed in the reeds.Very hard to get a shot as they were about 40 m away and well hidden.This is my best shots.Not good but getting better.

Again as Pete predicted after a while they flew from the reeds and back into the bushes just the other side  of the stream.This time they did not fly away straightaway.For an age they remained deep in the bushes so shots were hard but I was able to increase my already very large twig shot collection.Here are my best in the bushes shots.Getting better. 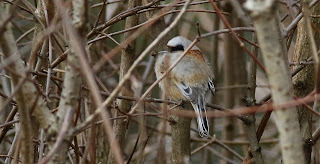 After a while they began to show more in the open so I was able to get some better shots.What cracking looking birds. 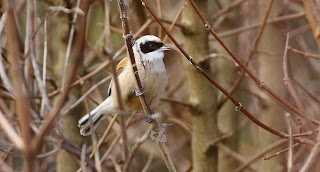 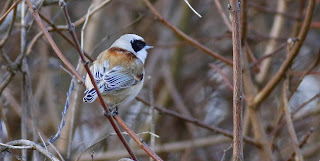 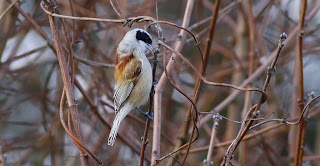 There were other birds on the site amongst the better ones were Chiffchaffs,Reed Buntings, Long Tailed Tits and this Grey Wagtail.

Posted by Max Silverman at 08:08 3 comments: Links to this post