On Tuesday morning I popped over to Marsh Lane again getting there not long after 9.00 AM to find it a bit gloomy but not too cold.

From the Oak hide I spotted 3 Goosanders (Two females and one male)  that seemed to be heading towards the River hide so like a fool I dashed over there and of course when I got there the little devils were cruising back towards the Oak hide.I stupidly spent the next hour going between the hides hoping to get close enough for a decent shot but every time just as they were getting into range they would turn back.All I got were a couple of crappographs in the poor light but also on the plus side I got plenty of exercise.

Best bird of the morning was a drake Goldeneye that showed pretty well for a while in front of  the northern causeway hide.Didn't get great shots and I couldn't claim the distance as an excuse as it came pretty close but the light was pretty grim.Very nice to see down at Marsh Lane.

Posted by Max Silverman at 03:23 No comments:

This morning at just after 9.00 AM on the way to deliver a birthday present I called into Brueton Park to take some shots in RAW which I never use but all my tog friends swear by.

Brueton Park usually has Mallards,BH Gulls and a few Geese on show and very occasionally something decent.There are a few problems at Brueton Park the lake is usually pretty gloomy with the light poor in the mornings,there are usually loads of noisy kids there which is fair enough it is a park but by far the worse thing is that there are always loads of dogs racing around.

As expected there was nothing decent on the lake at the car park end but as I walked to the top of the lake I found  three pairs of Goosanders.As I love Goosanders I was pretty chuffed.However they were in the very gloomy part of the lake hiding under the overhanging trees and I'm blowed if I could get even a crappograph.

I decided to leave and deliver the present and get a cup of coffee.An hour later I went back to see if the light was any better and see if the Goosanders were showing a bit better.Yes and Yes was the answers although the light was still not good.

Did manage some decent shots but I got into so much trouble trying to edit the shots in RAW I converted them all to JPEG's  before I could edit the shots.

I even managed a couple of decent flight shots.

Posted by Max Silverman at 08:46 No comments:

OUT IN THE FREEZING COLD AGAIN.

I'm pretty certain I will soon be thrown out of the Fairweather Birders Club because yet again on Tuesday morning I went out with the camera in freezing cold conditions.Still very reluctant to venture out other than very locally I popped over to Marsh Lane again getting there at 9.45 AM and had the place to myself.

The CP pool was frozen over except for a small patch which was crowded with ducks mainly Teal and a few BH Gulls.The RW pool was the same with only a small patch of water not frozen over and only a few birds on show.The marsh was packed out again with Common Snipe but I couldn't find yesterday's Jack Snipe so only got shots of the Commons.

A Water Rail did show twice but on both occasions flew across the open area so unless you were very quick you couldn't get a decent shot.I was slow ! !

I went for a quick look again in the CP hide before I left and  before third degree frostbite finished me off for good.I found a Little Egret on one of the islands which did not look too happy in the cold weather.Trying to get decent shots of a brilliantly white bird in dazzling sunshine is not easy and I didn't do too well but it was nice to see.

It was very amusing to see geese coming in and trying to land on the ice.Quite a lot of skidding took place.

Just as I locked the CP gate I spotted a Redwing in the sheep field and as I'd done poorly this winter getting shots of these chaps I thought I'd better give it a go.Only got one shot before it flew off but luckily it came back pretty soon and perched on the fence. 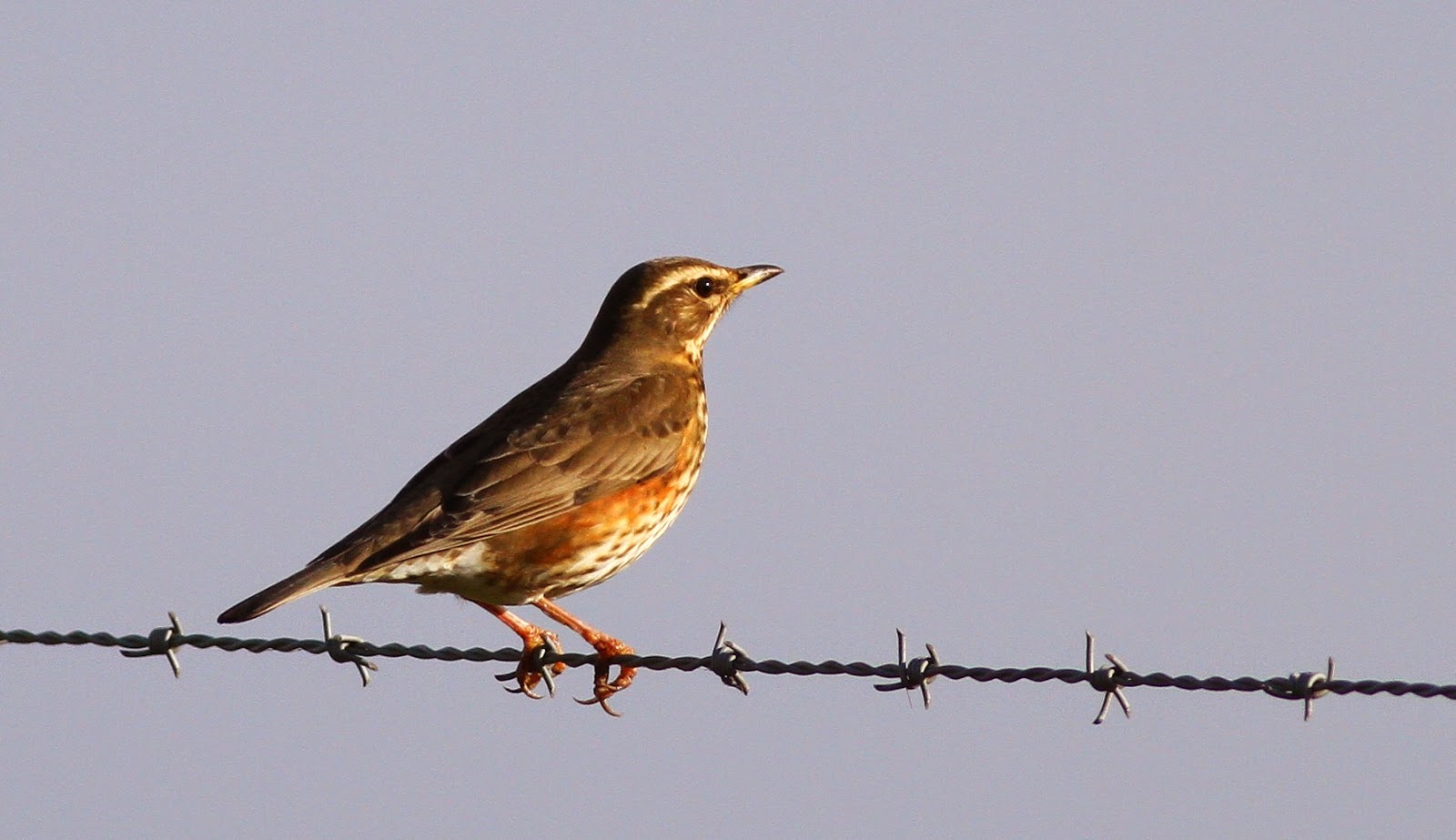 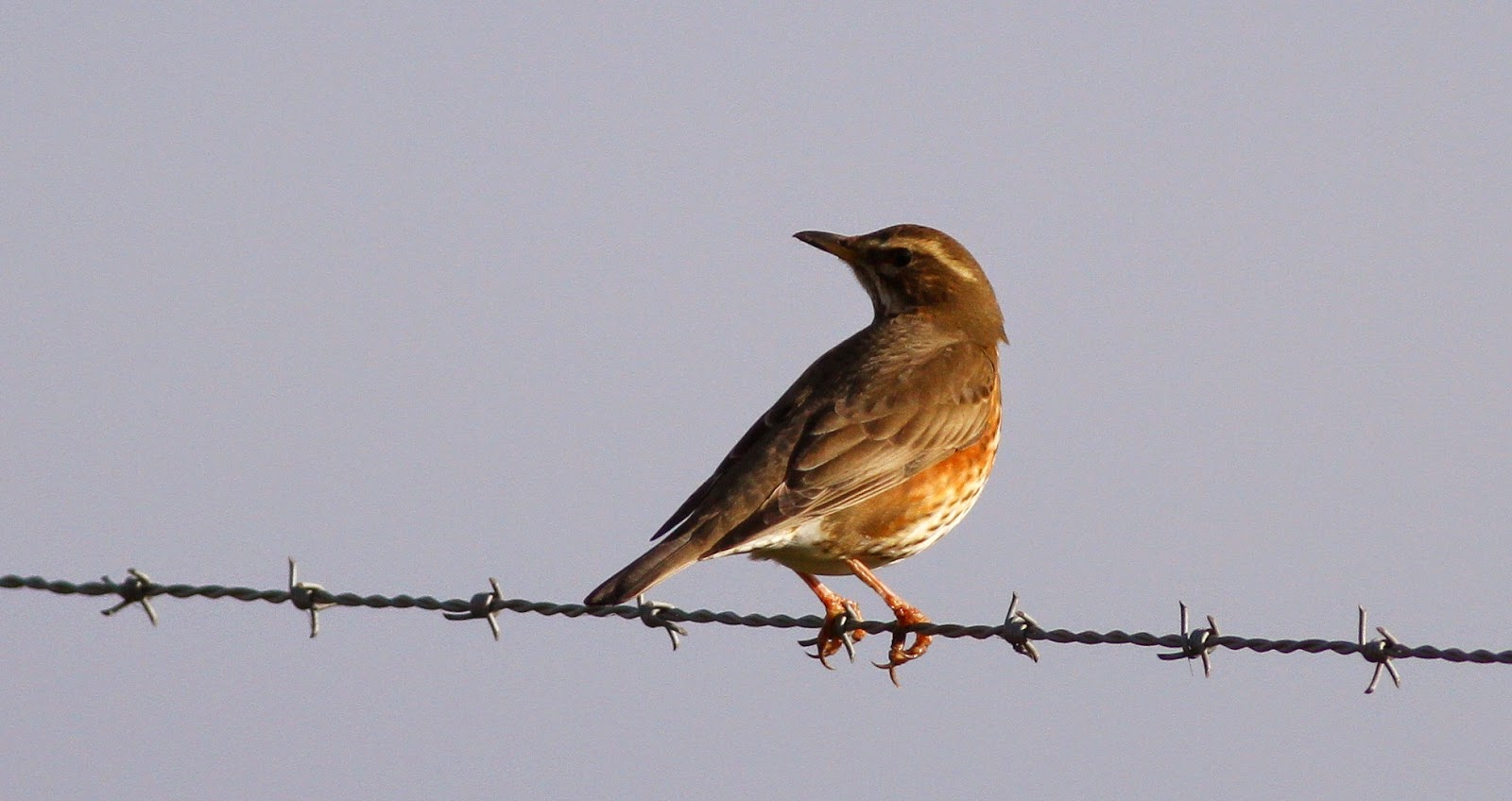 Posted by Max Silverman at 03:40 No comments:

MARSH LANE IN THE FREEZING COLD.

It was bitterly cold when I got down to Marsh Lane this morning so I was pleased I was still sticking to my only birding very locally policy this winter.

There was ice on all the pools and although the CP pool had masses of birds on it the only decent birds I spotted were the pair of Goosanders but they were too far off for shots.There must have been getting on for 200 Teal on the pool.

The RW pool was pretty quiet but there were 40+ Common Snipe in the marsh ( a friend found a Jack Snipe there also but I had left the hide by then).Here is a shot of a small section of the Common Snipe grouped together because of the cold presumably.

On the way back the gatekeeper Robin was on duty again and it wasn't too pleased to let me pass.Saw a Treecreeper in the beehive Oak trees but couldn't get a shot. 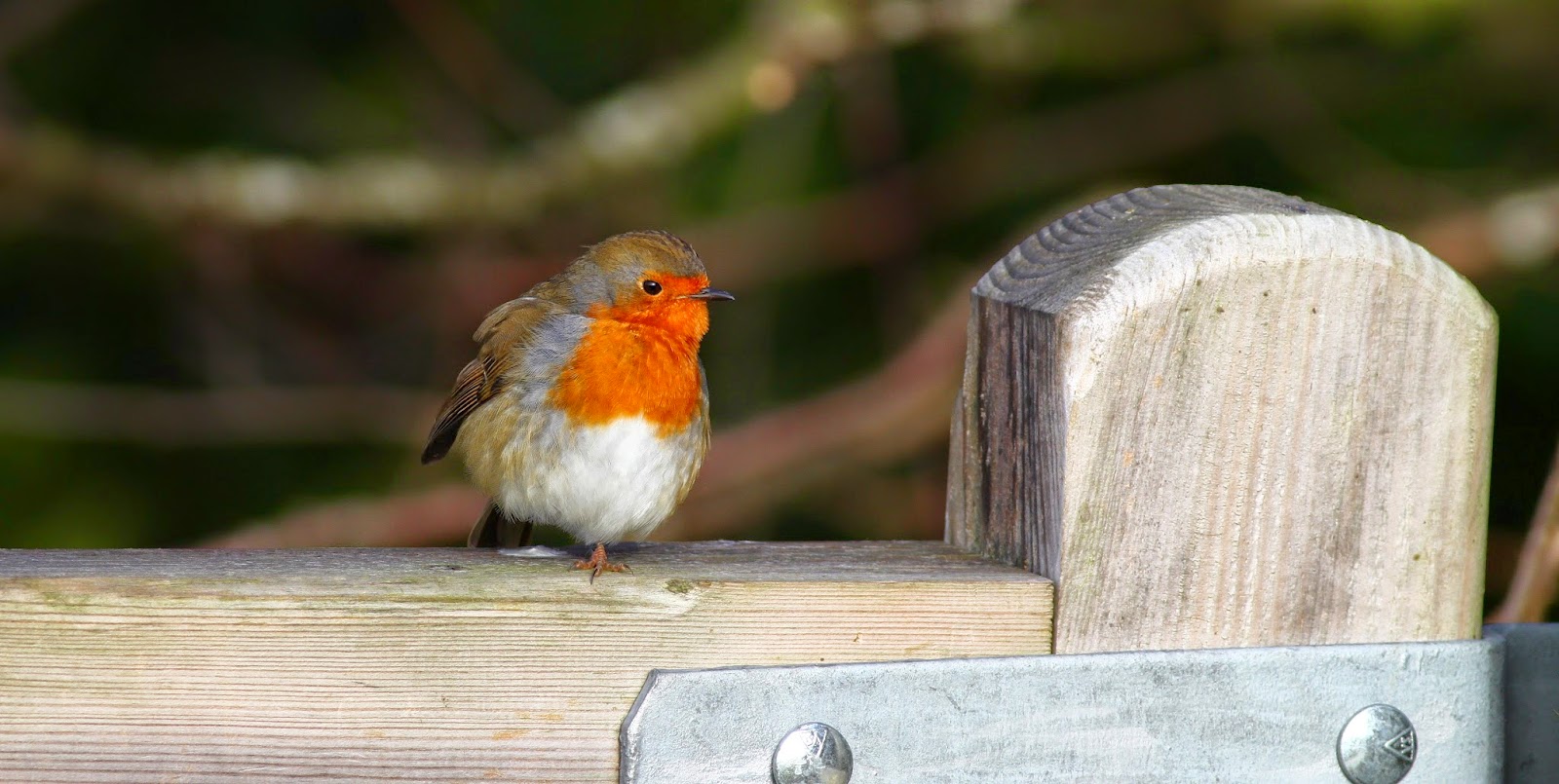 .
Back in the CP hide I found that the ice had forced the Goosanders to come a little closer.Got some decent shots of the female but as usual blew the whites out on the male.Don't think I've ever got a really good shot of a male. 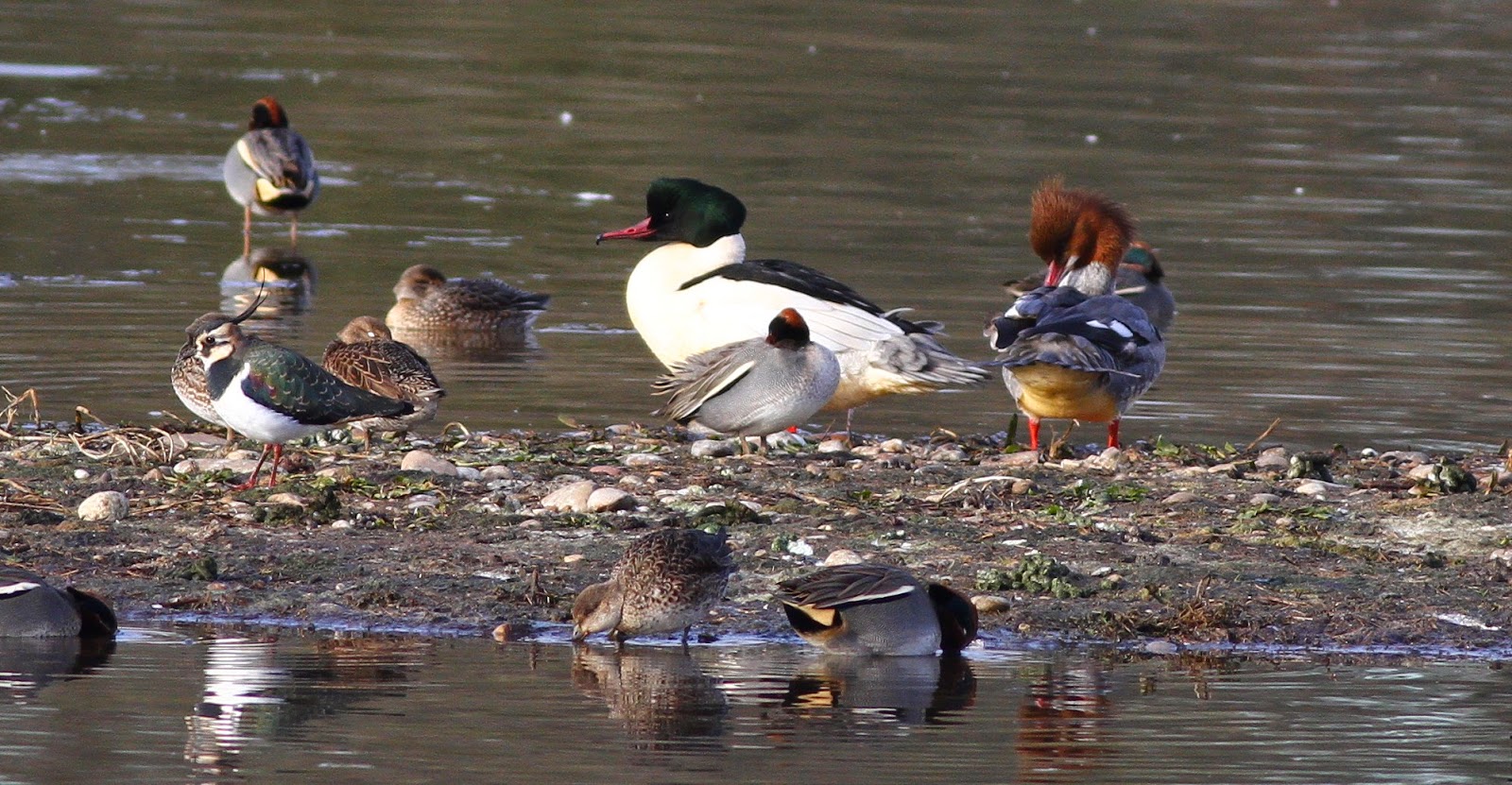 Posted by Max Silverman at 06:55 No comments:

A BETTER MORNING AT MARSH LANE.

Had a better morning at Marsh Lane this morning mainly because at long last I got some shots of the drake Pintail that's been there for some time now but before had always been miles away for me.

Arrived at just after 9.00 AM to find it bright but very cold.Straight away my thermals were being penetrated and I was already getting cold .I warmed up a little when from the CP hide I spotted the Pintail fairly close.

It soon headed to the edge of the pool and into the reeds and almost out of site.

With the Pintail now out of site I got some shots of the 5 Common Gulls that were near one of the islands.

I then went to the Oak hide to check out the RW pool.Soon found a couple of Shellducks  and a pair of Goosanders.The latter remained asleep for the whole time I was in the hide.Miserable so and so's.

Before I left I checked in the CP hide to see if the Pintail was showing.It was in the same spot but remained out of site most of the time but did pop it's head up occasionally. 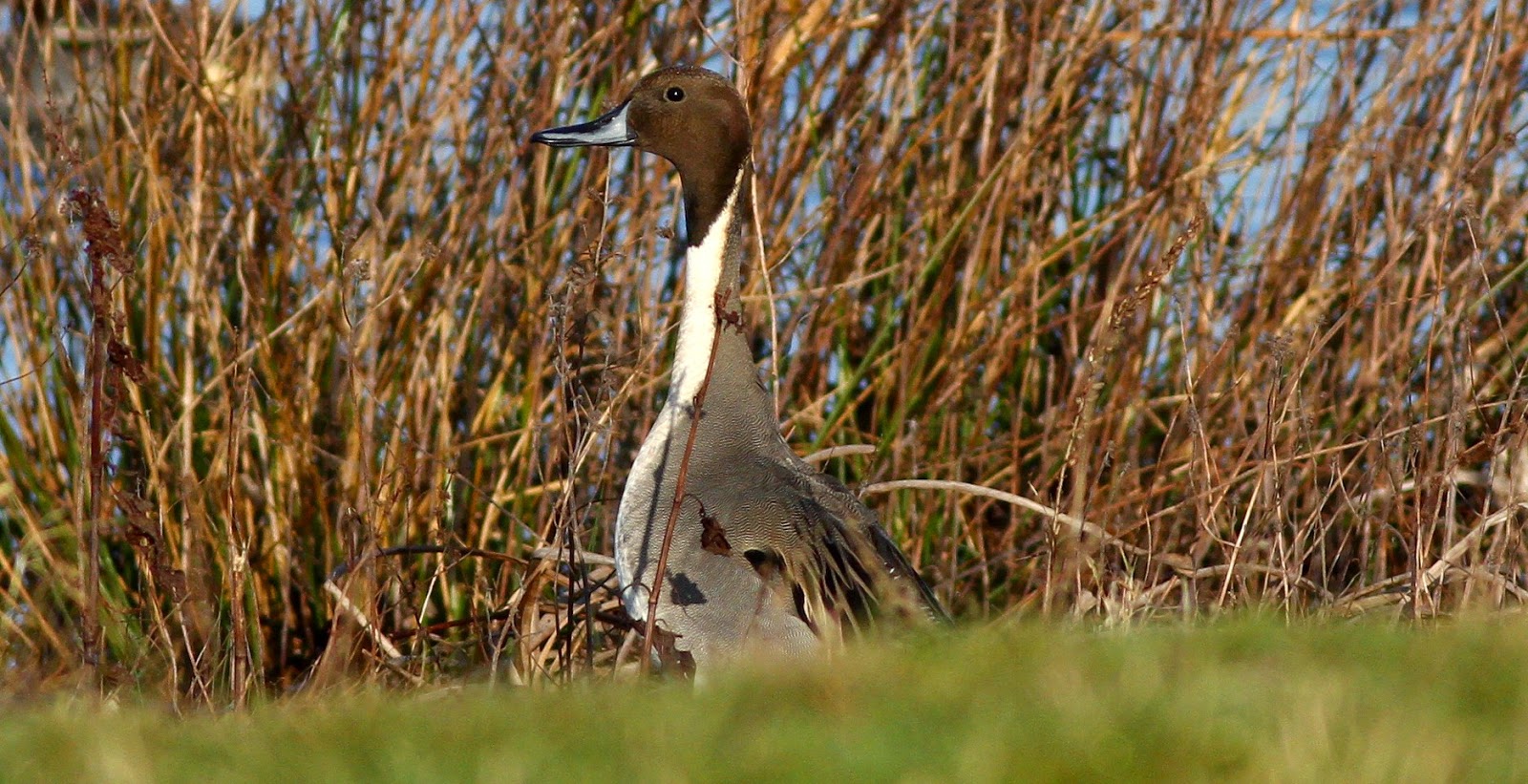 After a decent wait it went on the water again but soon drifted off to the north end of the pool.

Posted by Max Silverman at 06:56 No comments:

I'm afraid the bad run I'm having getting decent shots locally is continuing.This is despite going down to Marsh Lane a few times and doing my local country lane tour a couple of times in the last week or two.There is very little about I've even struggled to find Fieldfares and Redwings in decent numbers on the local berry trees.There has been nothing decent at my other local patches.Well decent enough to get me out and about in the Winter weather anyhow.

Even in the back garden where both my neighbours and myself are keen bird feeders it has been very quiet.Last year the feeders had to be topped up regularly but this year the feed is lasting for ages.No Siskins or Redplolls or any Winter Thrushes.

I've been birding for about 10 years now and I think this must be the worst Winter birding locally during that time at least up till now.

Things did seem to be much better at this time years ago.Here is an example of what was at Draycote Water on 30/12/08 in addition to loads of Goosanders,Goldeneye etc.(the shots were all taken either on that day or a few days either side).

Great Northern Divers were a regular visitor to Draycote Water in those days sometimes as many as four but now have become pretty rare with none this year. 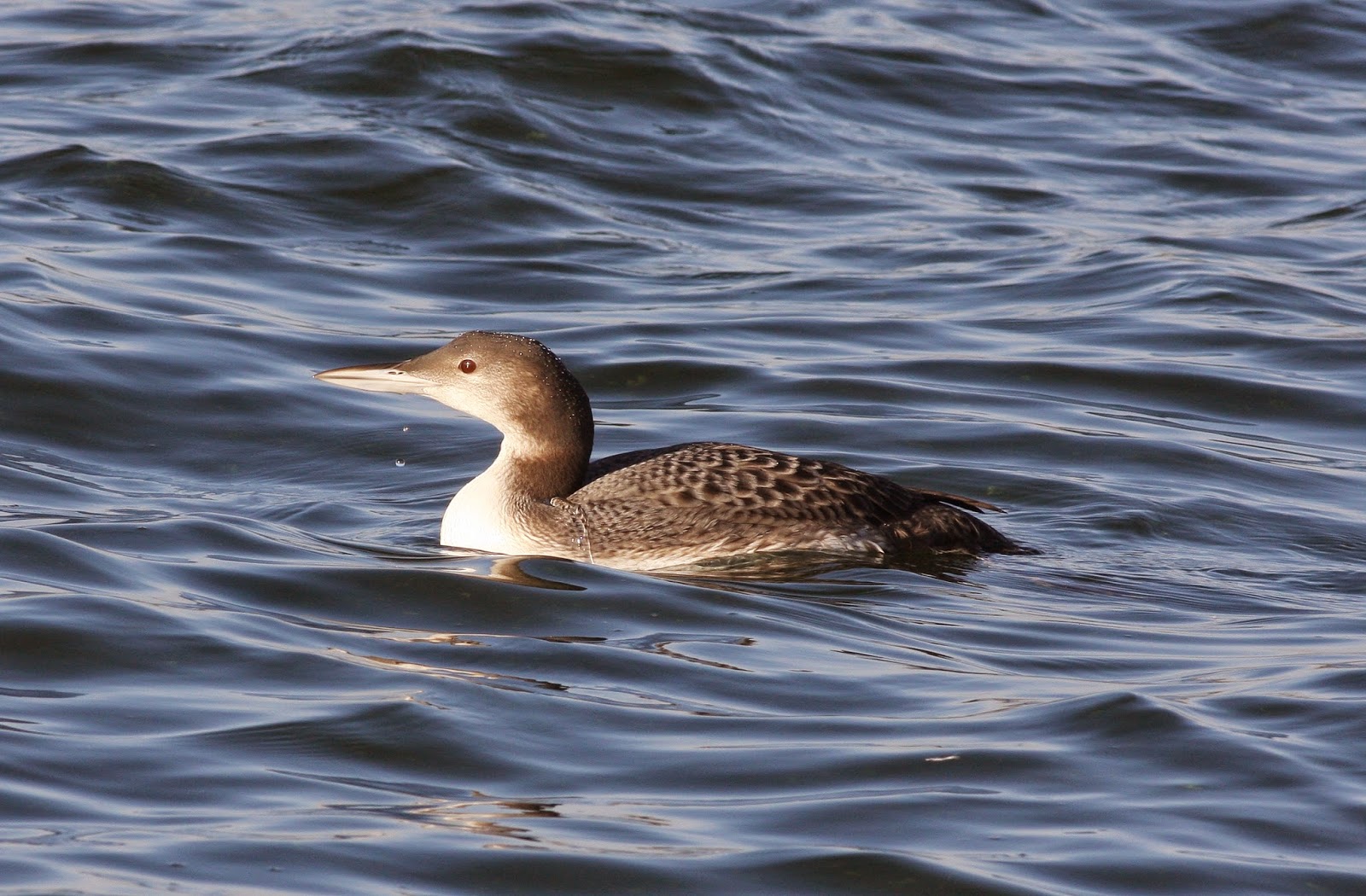 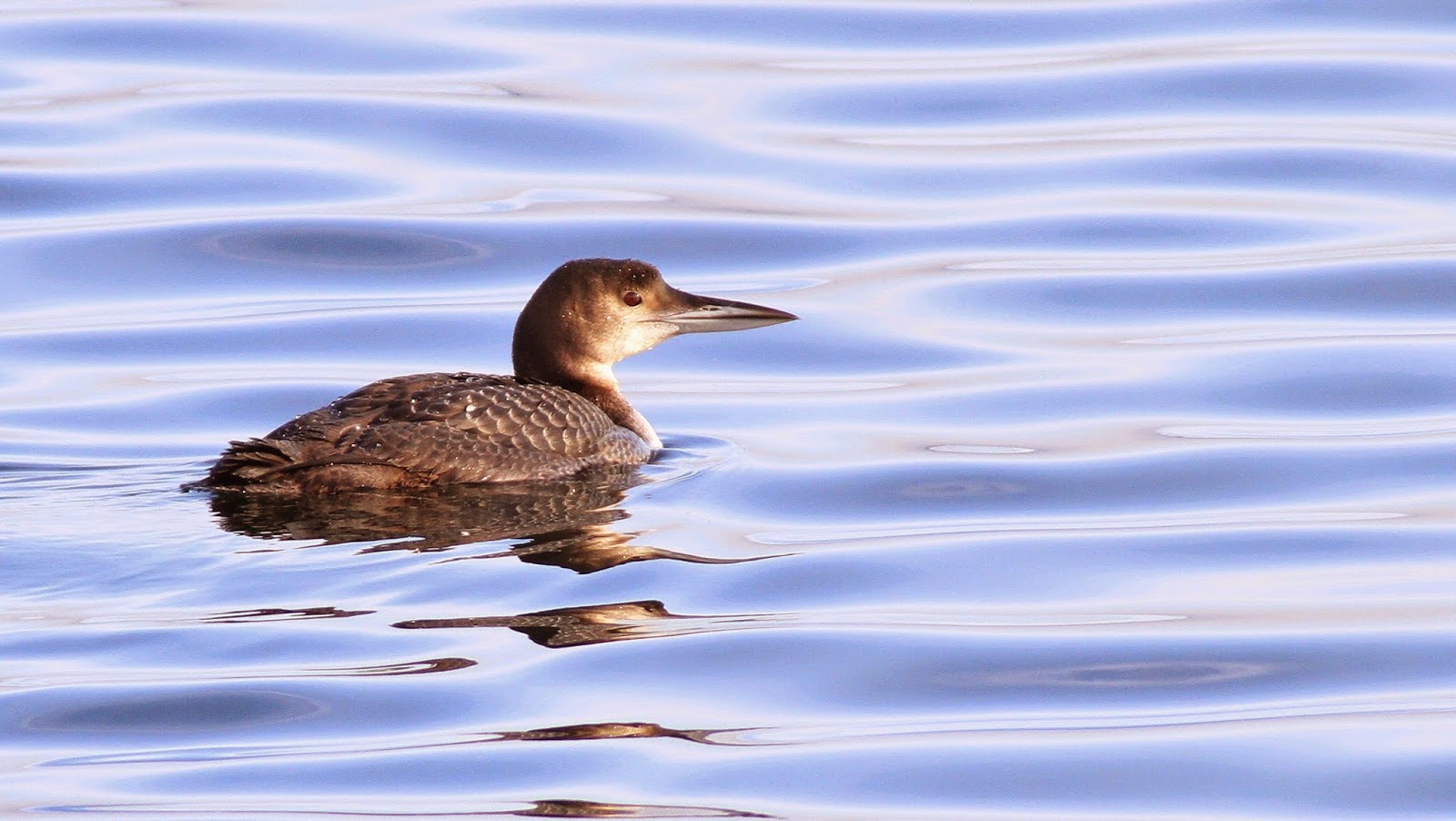 A delightful Red Necked Grebe use to show well from the Farborough Bank.It stayed for many weeks and later in the Spring you could watch it change into Summer plumage. 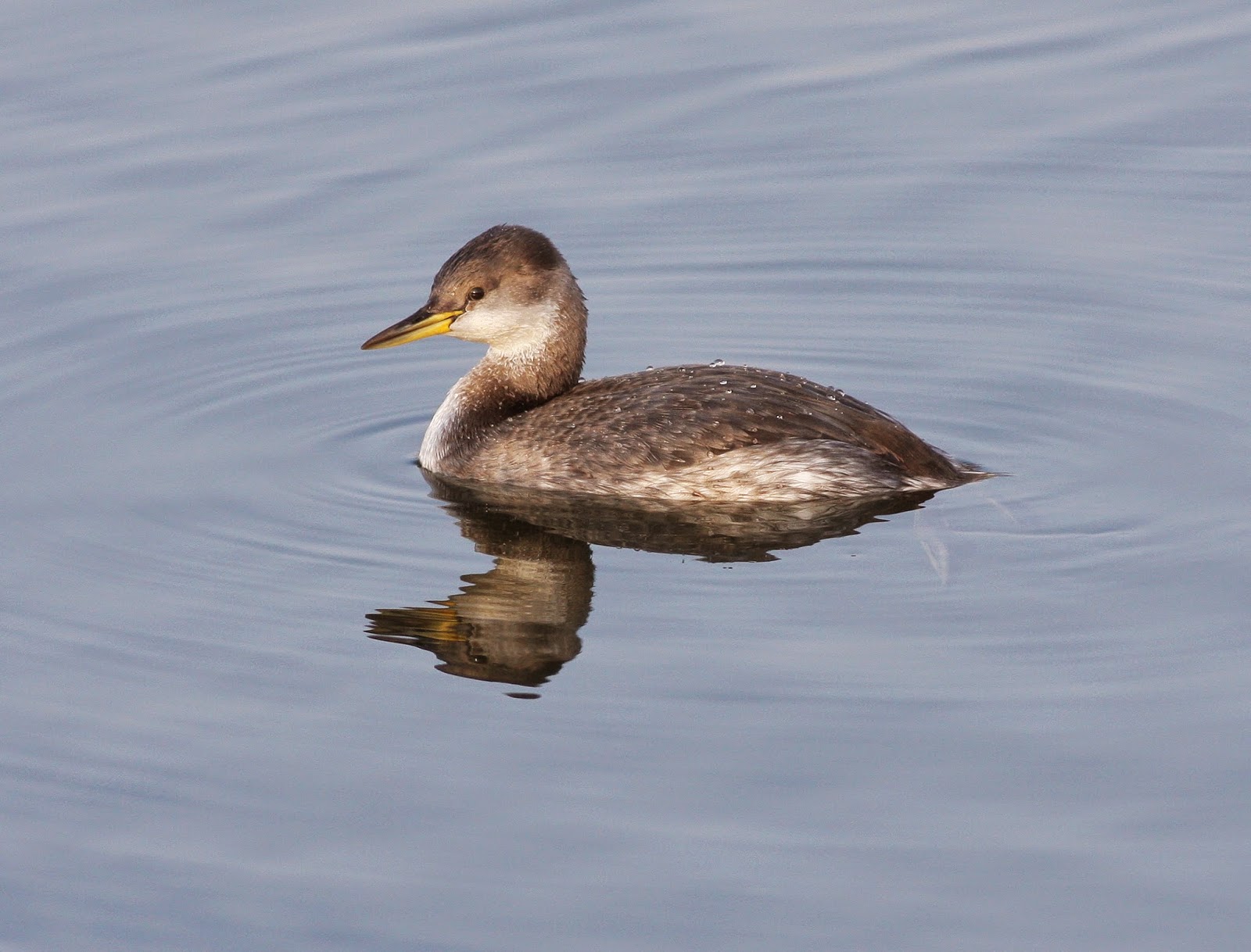 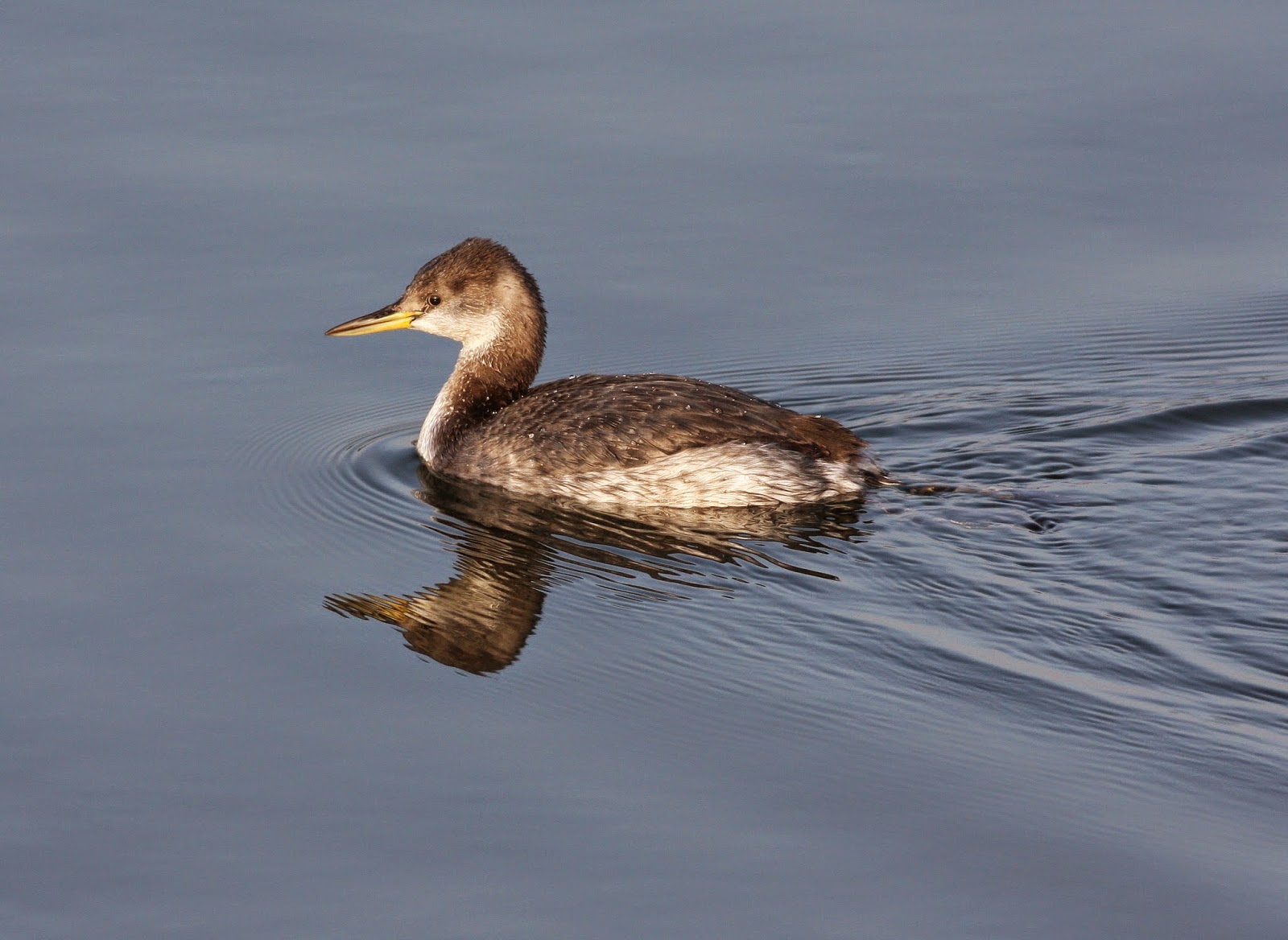 A great find just before Xmas was this cracking Red Throated Diver which was a lifer for me.Annoyingly it use to stay miles away in the middle but one lucky day it came much closer in along the Hensborough Bank. 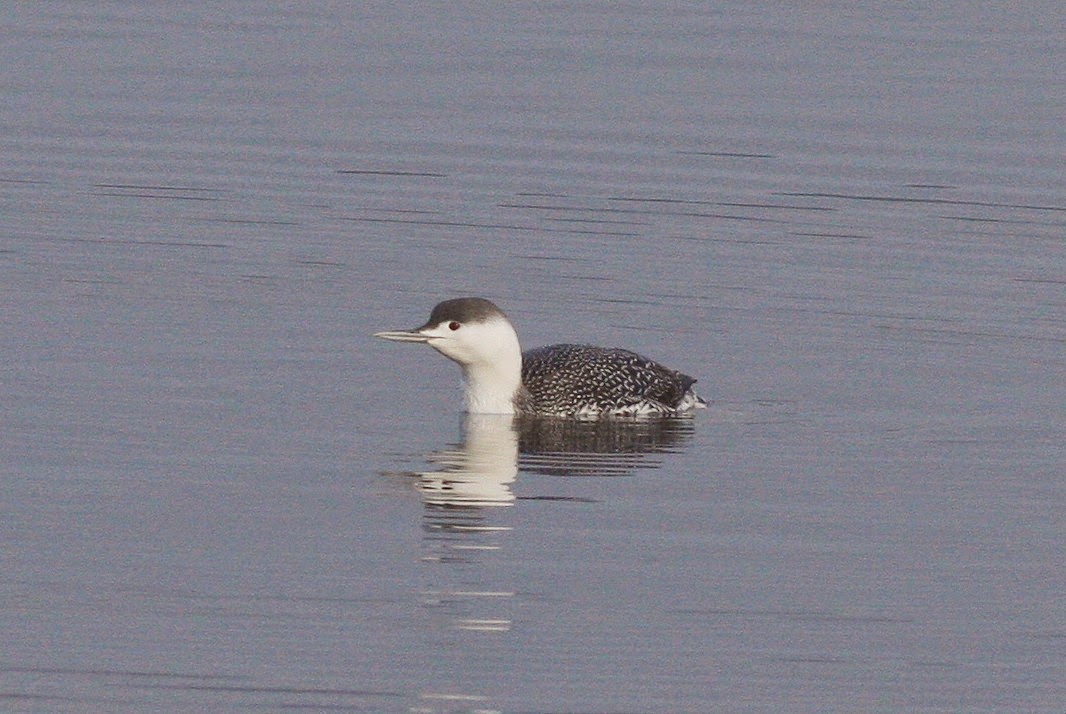 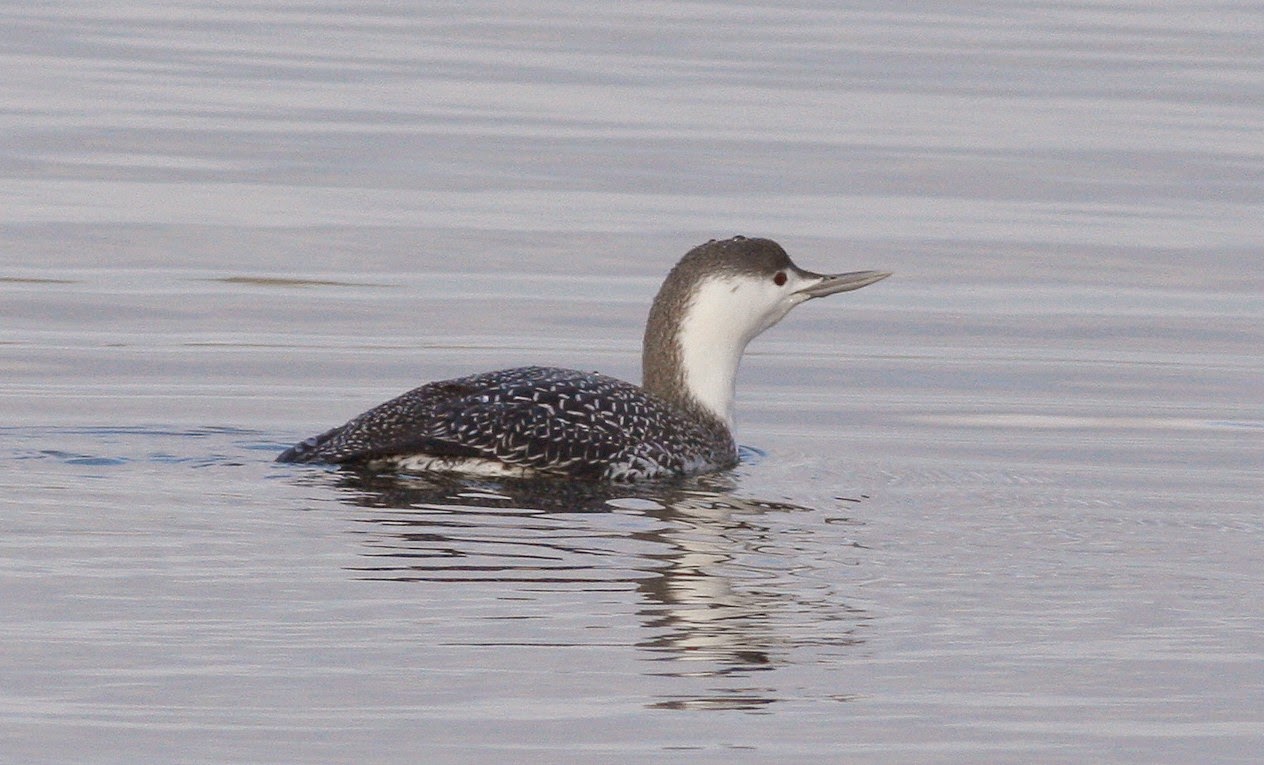 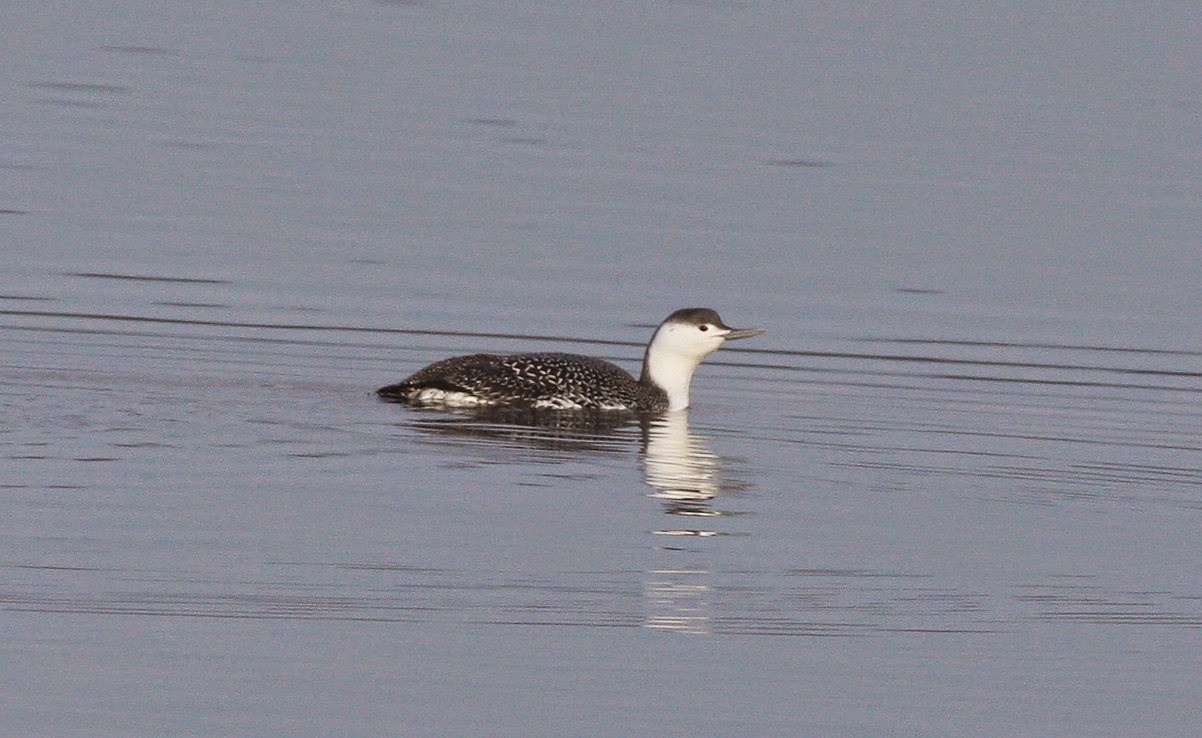 Also present at this time was a juvenile Shag that use to hang around the pontoons. 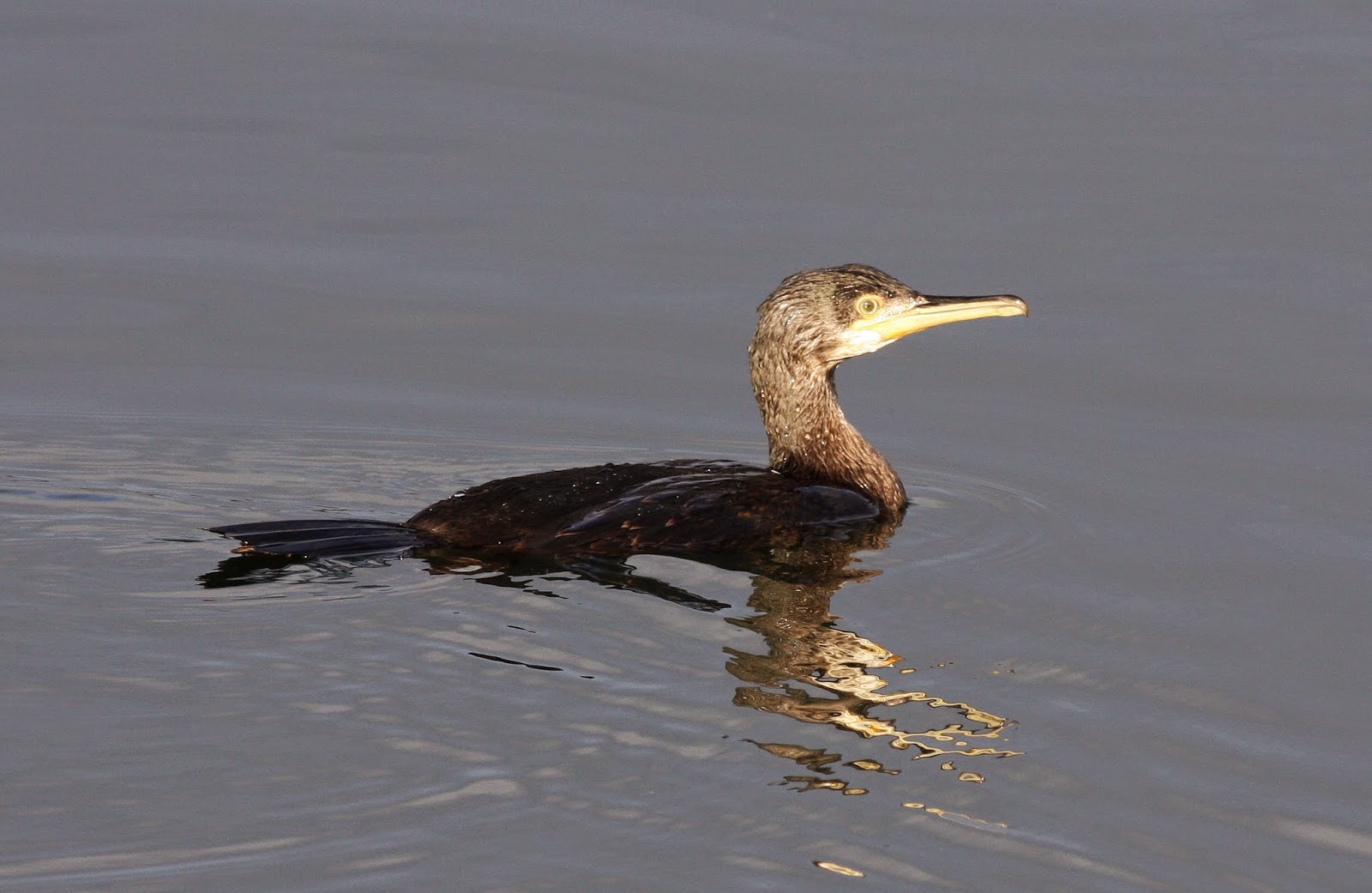 Every year including this one Draycote Water gets a drake Smew usually from along the Farborough Bank and that Xmas was no different. 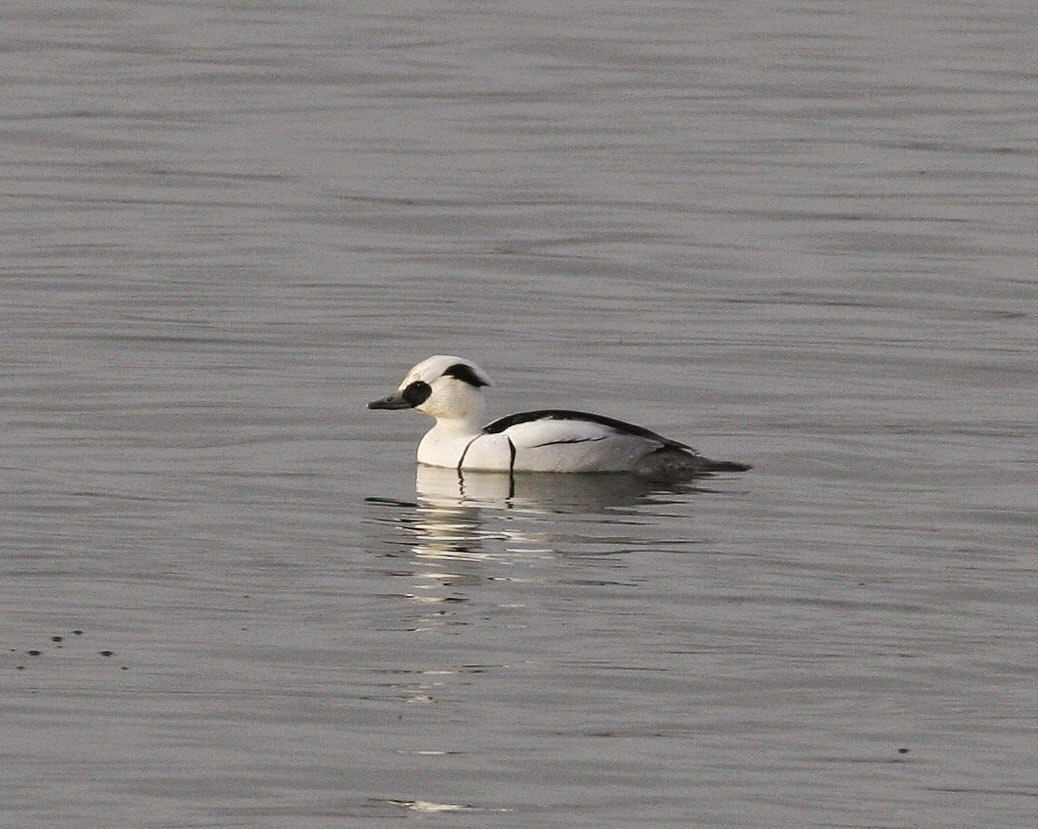 Not bad for a day's local birding.Happy days ! !

Posted by Max Silverman at 05:58 No comments: