In January I finally decided to drive south to Stow in the Wold to see the Blue Rock Thrush that had been in a housing estate there for a few weeks.Got there at 10.00 AM to find no other birders about.Oh Dear had I left it too late.Luckily no I found it after a while on a house rooftop.A Lifer for me ! !

In February I went to Swanshurst park in Moseley where an Iceland Gull had been seen with the other Gulls on the pond there.It would be another lifer for me but after 3 visits in very cold weather I'd drawn a blank.On the 4th visit I thought I'd drawn another blank after scanning all the pond but as I was about to enter swearing mode I spotted it only a few feet away.

In March some of my favourite birds Waxwings were paying visits to my local patch Marsh Lane.

Also in April a Cetti's Warbler showed very well along the causeway at Marsh Lane.

In May I made my annual visit to the Chilterns to see the Red Kites.I always park up in the small town of Watlington where you have got a very good chance of seeing them close up.

In June and July I made 4 visits to East Leake in Nottinghamshire where in a quarry 7 Bee-eaters had unbelievably taken up residence.Another lifer for me.Never got close so no great shots but who cares what stunning birds.

In July a Grasshopper Warbler was found at Marsh Lane.It was a very accommodating bird and decent shots were easy just as I like it.

In November I finally managed to get a decent shot of the Tawny Owl that you had to be very lucky to get a glimpse of in it's box along the streamline at Marsh Lane.

I've never been able to get a decent shot of a Hawfinch.The only shot I'd got was pretty poor and I had had to drive miles to get that so I was delighted when 4+ had been spotted in December in the churchyard at Berkswell  and I was able to get some decent shots at long last.

Posted by Max Silverman at 04:14 No comments: Links to this post

Wasn't going out this morning but as soon as the weatherman told me it would be fine and sunny by mid morning I grabbed the camera and set off to Marsh Lane hoping to see the 3 Bramblings others had seen recently.

I soon caught up with a flock of Linnets that were settling down on a few bushes near the crop field but they were very nervy and never lingered long.In this shot you might be able to spot a Brambling flying in.

I managed a few distant shots of one of the Bramblings that was hanging out with the Linnets. 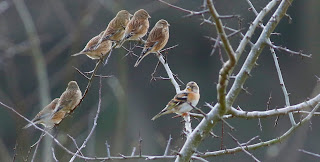 By this time the forecast sunny weather was in fact very gloomy weather.It was not cold but very windy.I was pleased in these conditions to get a couple of half decent Brambling shots before yet again they flew off.

The reason why everything on the reserve was very nervy was this chap.

Things went downhill then it got even more gloomy and the wind was blowing my hat off all the time.I did get a distant shot of the Linnet flock (50+) but can you see a Brambling among them ? Also I got a closer shot of one of the Linnets and I think another shot of a Brambling this one was high up in the Oak tree.

Posted by Max Silverman at 07:37 No comments: Links to this post

Having had a very lazy and indulgent Christmas day I was determined to get some exercise on Boxing day so after some domestic chores and a visit to Sainsbury's to stock up I drove over to Berkswell to see if the Hawfiches were still about.

Got there at 9.45 AM to find it sunny but very chilly.There was only one other birder there and he soon left after an angry call from his wife.Oh Dear.

It wasn't too long before I spotted one high up in the trees at the boundary of the churchyard.So good.They were still about.

After a bit of a wait one caught me off guard when it suddenly appeared on the tree next to the archway on the lower wall..Couldn't get a clear shot as twigs were always in the way but not complaining the bird was pretty close.

I then had a bit of luck.Half an hour had gone by since my last sighting and having been there an hour I was in wimp mode and was very cold.I was thinking of heading home to reduce the possibility of frostbite when a car pulled up right next to me.An elderly chap got out and he was wearing shorts and a tee shirt.In response to my "My God aren't you cold" he said "Feeling cold is all in your mind".He then set off for a walk.

Why this was lucky was that feeling a bit ashamed it kept me from leaving.Quite quickly 3 Hawfinches dropped into the top of the Yew tree by the church.

When the birds went further back in the tree I raced (well alright I ambled quickly) to the other side of the Yew tree and managed some more shots.

I have been in wimp mode recently very reluctant to venture out with the camera in the snowy conditions but yesterday I went out to my local patch Marsh Lane.

Got there not long after 9.00 AM to find that there was only one other birder on the reserve.This was no surprise as the pools were still iced over.

Along the causeway I found a Goldcrest but the gloomy conditions prevented me from getting any keepers and the bird soon flew off.

Also from along the causeway there were a large flock of birds in the big oak trees.Must have been 40+ birds most I think were Linnets.

The RW pool was almost all frozen over the only bit of open water was very distant.What saved the day was a Little Egret which was fishing in the flooded marsh next to the oak hide.It stayed there for over an hour and often came pretty close.

It was a bit of an expert fisher and caught loads of fish .

Most of the fish it caught were small but on one occasion it caught a large one.I thought noway it could swallow it but it did.

Posted by Max Silverman at 03:25 No comments: Links to this post