BLIMEY I FOUND A GREAT BIRD.

The sun was forecast for the first time in a while so this fair weather birder grabbed his camera and shot off to Marsh Lane getting there at 9.00 AM. It was not sunny however it was rather gloomy.

Did find a Dunlin in the gloom on one of the CP islands and the Whooper Swan was still there as well.However a good walk round didn't provide any photo opportunities.There was a very good count of 19 Goosanders from the River hide but they were a long way off.

Had to wait a while to re enter the CP hide as a large group from the RSPB had crammed into it.The Goosanders were still there when I finally got in but they were a long way off.When I was scanning around a bird flew in and when it landed I though that's a funny looking Goosander. A Red Breasted Merganser had been seen at Earlswood Lakes a few days ago so I thought could it be that bird.This is a shot I took then.

It then went a long way off and joined the Goosanders on the far bank. It finally came a bit closer and I managed a few more shots.We were fairly confident it was a RB Merganser in the hide till someone came in after it had flown and raised the query had we considered a juvenile Goosander.We hadn't but luckily we found out later it was a RB Merganser.

Couldn't get any great shots but so nice to see and more important was the fact I found it and I hardly ever find anything. 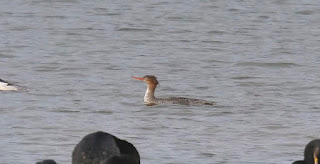