When I found out on Friday morning that it was going to be the last day for a while when it would be "Dry and sunny" I grabbed the camera and set out on a local tour.

I headed for Shustoke Reservoir first and as I parked up I encountered my first bit of bad news.The weather was not " Dry and sunny" it was "gloomy and damp" so well done weather man you've done it again.

The second bit of bad news was that those pair of miserable Great Northern Divers yet again stayed miles away for me.I am convinced now that they have got it in for me and this was confirmed later on when one of them gave me a wing flap which is the equivalent in the GN Diver world as the finger.I'll get them though !!! 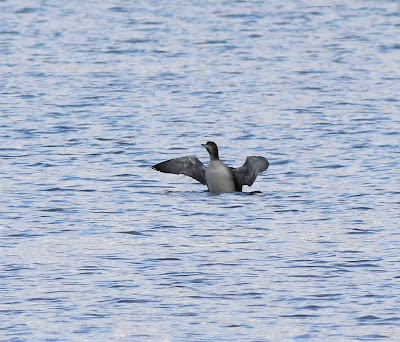 Luckily for me there were at least 15 Goosanders on the water.

However it was the Goosanders that delivered the third bit of bad news.They also spent most of the time way out from the shore well out of range of my lens and when they did venture in they spotted me as I crept towards them and headed out again.Being spotted was a big surprise for me as my camo gear and fieldcraft skills are legendary often when I'm walking round reserves people I know well will walk straight past me not knowing I'm there.Well I think they don't. 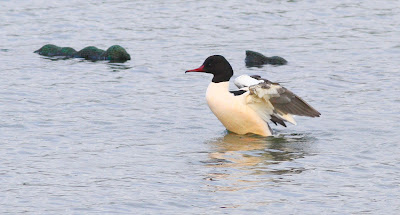 Did manage some flight shots which aren't too bad considering it was so gloomy. 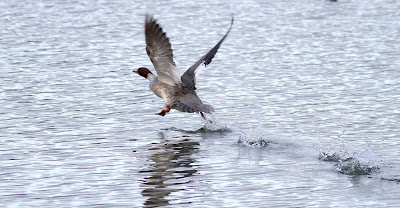 By the time I entered the Oak hide it was at last beginning to brighten up but the railway pool was very flooded with the water not far from the hide.With rain forecast for the next few days I can only see things getting worse and this hide may be cut off.

There was very little around with most of the islands under water but I did spot the Jack Snipe hiding away in the reeds in the flooded marsh area.The trouble was in the hour I was there it didn't move more than 10 centimetres. 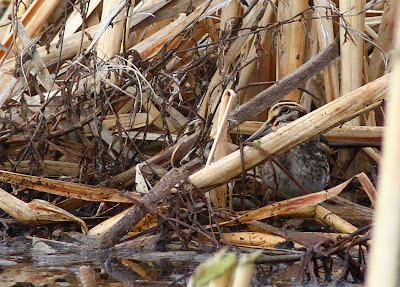 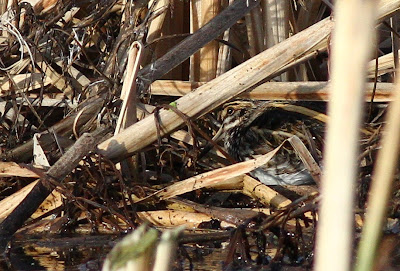 I was lucky when I spotted a Tree Sparrow on the Oak feeders.First I'd seen for a couple of years. 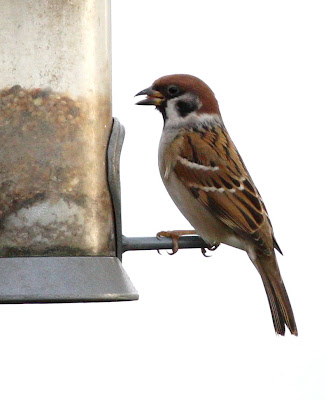