I had not planned to go out with the camera on Sunday morning as all my local patches would be flooded and it would be a waste of time.However when I had to nip out to the local shops I decided to have a quick look at the river at Brueton Park to see if it had burst it's banks.

The main lake at Brueton Park is not known for getting any decent birds all you normally get are Mallards,BH Gulls and Canada Geese. Brueton Park is only famous because often it records more dogs racing around than you get at Crufts on a busy day.

After I had a look at the river racing under the bridge I decided to have a quick walk round the lake.When I got to the top end of the lake I was very surprised to see a lone female Goosander hiding in the gloom of the far bank.A very good bird for Brueton Park.

Anyone who knows Brueton Park would know that that end of the lake is very gloomy as it is surrounded by tall trees so to get any shots I had to wind up the ISO pretty high.This Goosander unlike her mates at Shustoke Reservoir and most other places was not shy and was soon cruising round the lake pretty close in. 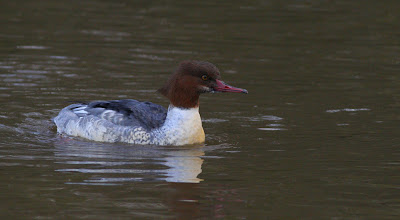 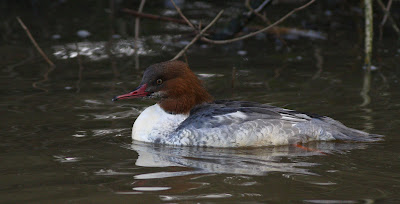 Amazingly my new best friend then decided to tackle the rapids just before the top bridge. 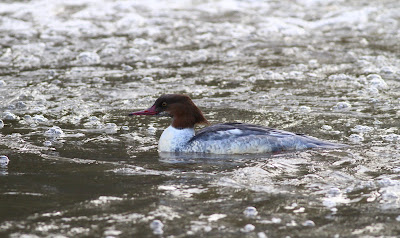 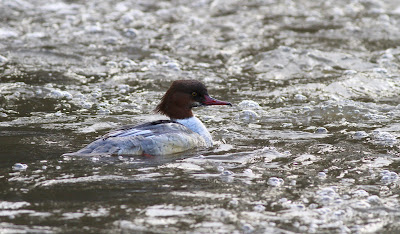 After she got through the rapids she started to fish near the bridge and I managed some more shots.I've never got so close to a Goosander before.She didn't seem to mind about people or dogs. 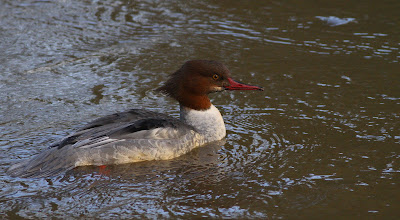 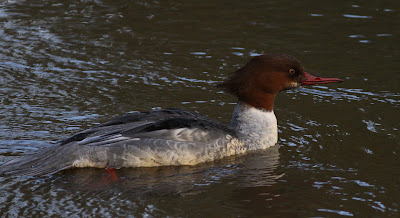 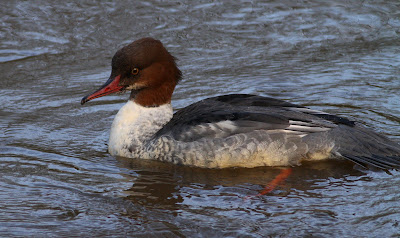 After failing catch any fish it decided to clear off and flew into the distance eastwards.

I've just been told that this female could in fact be a young male.