It was hard work but I did manage to see and get shots of some better birds in 2015 including a couple of life ticks.Here are a few shots.

In June a Melodious Warbler set up home for a few weeks down the track opposite the main entrance to the Marsh Lane reserve.It was a life tick for me and it attracted a lot of observers who enjoyed getting some great views. 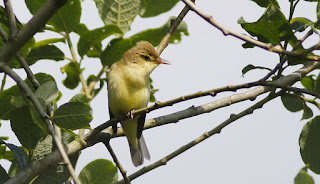 In March I went to see a Yellow Browed Warbler that had been at a sewage works  at Sedgeborough  not far from Evesham.It had been there for quite a while and I thought I'd left it too late especially as there were no other birders there but luckily I found it.My first shot of one of these chaps.

Another bird I thought I might have left it too late to see was the Red Footed Falcon that was favouring a paddock north of Stoke on Trent in July.Another life tick for me.

In April a Ring Ouzel  dropped into a field close to Napton Reservoir so I raced over there to get my first shot of one of these chaps.

Alright this is not a rare bird but every year in April I pop down the M40 to Watlington and get some shots of the Red Kites.Cracking birds.

Twice this year I've been lucky on both occasions to see a Whinchat  that favoured the car park fencing at Marsh Lane.This shot was taken in May. 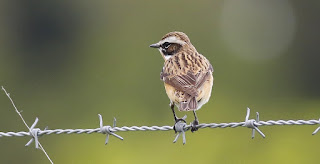 One of my favourite birds is a Hobby and every year in September I go and try and get shots of them zooming around.The one that favoured Marsh Lane this year put on some superb displays. 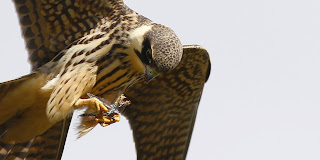 In May I visited the Somerset levels and got some shots of the Great White Egrets.

Another bird I love to bits are Spotted Flycatchers and I try to get shots of them every year.This shot was taken in a churchyard near Nuneaton in June.

In March I went all the way to Parkend which is near Chepstowe to try and get some shots of a Hawfinch.Never been able to get a shot of one of these before and I was lucky to get even this so so shot because the bird favoured the gloom under the trees.

In October a  SnowGoose spent a short time on one of the islands in front of the car park hide at Marsh Lane.

After a good friend tipped me off in June that a Grey Phalarope was at Brandon Marsh I only made a move to go and see it after I realised that it would be in Summer plumage and all my previous shots were of them in Winter plumage.Luckily it was still there when I finally arrived.

Finally got a decent shot of a Little Gull at Titchwell in June.

Again not a rare bird but this shot of a Barn Owl taken in June in Norfolk in June was rare for me as it was my first shot of one for several years.

Another life tick for me was this Marsh Warbler that was along a stream in Narborough in Norfolk in June.Unlike the Melodious Warbler this bird was more like the Dusky Warbler at Marsh lane a few years ago which sung out a lot but never showed.This is the best shot I managed and it took me 4 hours to get it.