SOME SHOTS FROM THE ARCHIVES (Part 1).

Thought I'd better post a blog because several people have wanted to know if I'm still alive.Well I am but I'm having to hibernate.Old age has caught up with me and I'm afraid to admit that I now cannot enjoy birding in the cold winter weather and also it has caused me to struggle to get rid of an upper respiratory tract infection that's been round for weeks now (this despite blasting it with 40 antibiotics in 5 days).

With no decent birds visiting my garden feeders I thought I'd trawl through the archives for some of the better birds I've seen over the years when I was able travel far and wide.

After 10 years of trying I finally got a decent shot of a Hawfinch in December 2017 when a few of them visited the churchyard in Berkswell.

In July 2015 a new bird for me a Red Footed Falcon was showing in a paddock just north of Stoke.After a nightmare journey up the M6 I managed a few shots.

Again after a wait of many years finally got some shots of a Black Necked Grebe in summer plumage when one turned up in June 2016 on Earlswood Lakes.

Thought I'd left it too late to see a Blue Rock Thrush that had spent a while on the rooftops of a housing estate in Stowe in the Wold in January 2017.Had to find it myself as no one was there on the day I went.

I've seen a Glossy Ibis several times but never got a decent shot and couldn't get one when one showed at Upton Warren in April 2018 despite waiting for hours in the hide.

I love Hobbies but have managed no shots recently.This is one I took at Marsh Lane in September 2015 clearly showing the discarded wings of a dragonfly.

A very accommodating Black Redstart was on some wasteland in Coleshill in February 2019.It used to come over to the photographers and pose for shots. 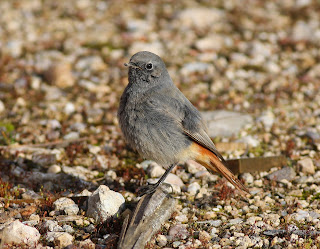 Was wondering where you had got to Max! Good to know you are still out there!
Mick Brewer

Hello Max
Good to see you old pictures we are really missing you at Marsh Lane.